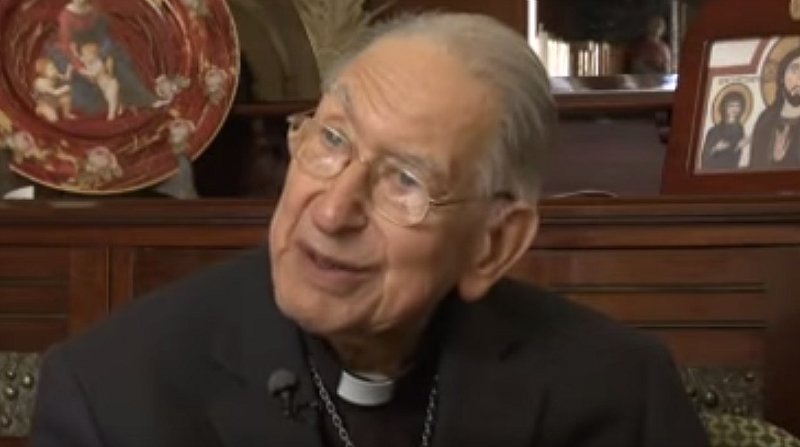 'In rigorism there is an innate brutality that goes against the gentle way God has of guiding each person,' said Cardinal Cottier.Youtube screenshot

Aug. 7, 2015 (LifeSiteNews) – On July 30, 2015, the journal Vatican Insider (of the Italian newspaper La Stampa) reported on the recent interview made by the current editor of Civiltà Cattolica, Father Antonio Spadaro, S.J., with the Swiss Dominican, Cardinal Georges Cottier. In it, Cardinal Cottier criticizes the expression “remarried divorcees” as being “too generic” and as too often inadequately “applied in fundamentally different situations.” He also says: “In rigorism there is an innate brutality that goes against the gentle way God has of guiding each person.”

In the interview – which will appear in the next issue of the Jesuit periodical – Cardinal Cottier argues in favor of a mercy that can be interpreted as a liberalizing of the Church's moral teaching. He says, according to Vatican Insider:

“Mercy is doctrine, It is the crux of Christian doctrine,” the Swiss cardinal said. “Only a narrow-minded person can defend legalism and imagine that mercy and doctrine are two separate things. In this sense, today’s Church has realized that no one, no matter what their [sic] position, can be left alone. We need to guide people, both righteous and sinners.”

For Cottier, some “remarried” divorcees may be in such a situation because they have been abandoned by their first spouse, and they then looked for someone to help raise their children. Cottier implied that those cases need a different treatment from those who were the guilty party in the break-up of their first marriage.

According to Vatican Insider, Cottier's argument runs, as follows:

As far as the term “remarried divorcees” is concerned, the Theologian sees it as “unfortunate” from a canonical point of view: “It is too generic and is applied in fundamentally different situations. It indicates that one or more persons who have divorced from an indissoluble sacramental marriage, have entered into a civil marriage. This second marriage does not annul the first, neither does it substitute for it, because the first remains the only marriage and the Church does not have the power to dissolve it. Pastoral judgment cannot ignore the origin of each of these two unions, it is purely a question of equity.” [Cottier then describes two cases of remarried divorcees, as were just described above.] “These are different cases. The second one involves a “scandal”, while the first is linked to solitude, a difficulty is moving on, vulnerability, need, including [the need] for companionship”. “Generally, in every situation, justice requires certain important factors to be taken into account”: “The duty one has towards the abandoned spouse, who often remains faithful to their [sic] sacramental vows,” “the rights of the children born during the first and legitimate marriage” (“Strangely, the 2014 Synod focused little on this aspect, at least in terms of media coverage”).

In response to the different factual backgrounds of  those “remarried” divorcees, Cottier says: What is needed, instead, is “prudent judgment.” He says:

I believe that the solution to some problems should come from the prudent judgment of the bishop. I say this not without hesitation and doubt, seeing division between bishops. My claim refers first and foremost to certain situations where there is a big likelihood of the first marriage being null [from its inception] but it is difficult to provide canonical proof.

Cottier also argues with reference to the changed life-realities: “in accordance with its pastoral mission, the Church always needs to be attentive to historical changes and the evolution of mentalities. Not because it should subordinate itself to these, but, rather, in order to overcome the obstacles that can prevent others from embracing its advice and guidelines.”

According to Cottier, “the existential coordinates of peoples’ spiritual lives must be respected.”

Seeming to follow the direction of the recent May 15 “Shadow Council” and its softening attitude toward mortal sin, Cottier also argues against “judging” people,  which also “scandalizes people.”

The words “rigorism” and “negative judgment” can be read in the context of the traditional moral teaching of the Church which called sin a sin, and forbade adultery and fornication, according to the words of Our Lord Jesus Christ.

For Cardinal Cottier, however, the Year of Mercy might bring changes in the Church away from a judging attitude. He hopes “that the Year of Mercy will enlighten the work of the 2015 Synod and will shape it. There are still people who are scandalized by the Church, men and women who, due to a negative judgment which was expressed in an impersonal and insensitive way, have felt a terrible rejection. This is where confessors have a huge responsibility.”

This interview is not the first one published in the recent months by Civiltà Cattlica, whose Jesuit editor, Father Spadaro, is a friend of the pope. The journal has repeatedly promoted the Kasper Proposal and other similar arguments which are strategically now being brought forth, apparently in order to liberalize the Church's moral teaching on marriage and the family in a laxer or more latitudinarian way.

Among these more progressive voices, Cardinal Cottier himself has been earlier in the news, in 2009, when he argued that Obama in his Notre Dame address had not defended abortion as an absolute right and that the president recognizes the “tragic gravity” of the problem. Cottier also then said that Obama does not defend “relativism,” and that “his words move in the direction of reducing the evil” in trying to make “the number of abortions as small as possible.”