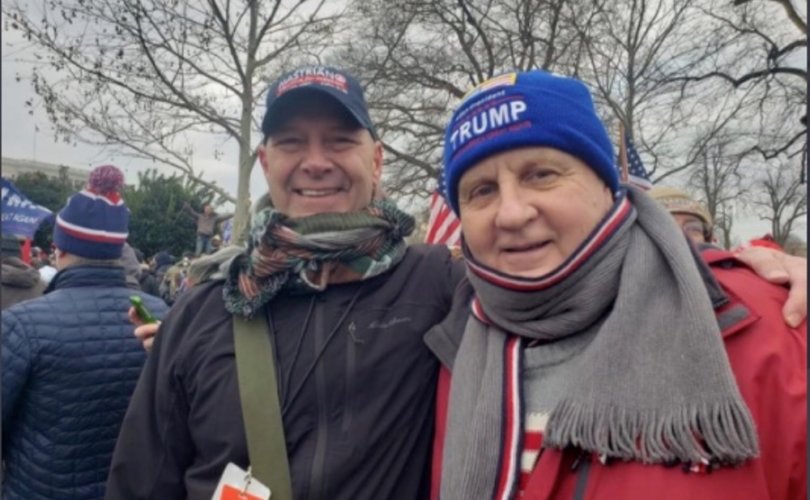 LATROBE, Pennsylvania, January 12, 2021 (LifeSiteNews) — A former Pennsylvania state representative and U.S. Congressional candidate has resigned his teaching position at St. Vincent College following his participation in the January 6 March to Save America Rally in Washington, DC.

Pro-life Republican Rep. Rick Saccone, 62, who served for eight years in the Pennsylvania House of Representatives (2011-2019) uploaded a post on Facebook while attending the rally which triggered a hostile social media response, including a “change.org” petition demanding his termination, TribLive reports.

The post, which was later removed, said “We are storming the capitol. Our vanguard has broken through the barricades. We will save this nation. Are u with me?”

Saccone, who fell short in a 2018 U.S. congressional race by a 0.3% margin, said he certainly didn’t intend the comment to be taken literally. In fact, he told LifeSiteNews he was unaware that anyone actually entered the building by the time he and his wife had left the grounds.

He lamented the disingenuousness of his political adversaries putting the worst interpretation on his words. “You can’t use hyperbole, you can’t use figures of speech, you can’t use metaphor because it’ll be twisted into something negative,” he said.

Later, when seeing news reports of a forced entry into the building, violence, and damage to property, he was puzzled. In a follow-up interview he referred to it as a “total tragedy,” which “should be condemned by everybody.” He also expressed hope that those responsible for any and all crimes would be promptly identified and prosecuted.

A tale of two capitals

Asked to give his impressions on the overall event and its media coverage, Mr. Saccone called it a “tale of two capitals.”

“On the west side of the Capitol you have half-a-million or more people peacefully exercising three of the first five rights of the First Amendment: freedom of speech, freedom of assembly, and freedom to petition the government for a redress of grievances,” he said.

“Everyone is in a happy mood, they’re singing along the route, there is music, there are guys on stilts with Uncle Sam pants on, it’s almost like a carnival,” Saccone said. When this group arrived near the Capitol, the police removed the barriers “and let them up on the steps” to fly their flags, to “let the Congress know that there are half-a-million people outside who want them to do the right thing and hear their voice,” he said.

“On the east side of the Capitol,” according to what he saw in the news, there are maybe “just a few hundred people” engaged in “violence, property damage, destruction, [and] injuring people,” yet “the violence on the east side is being attributed to the people on the west side [who] were doing nothing more than exercising their first amendment rights,” he said.

“And this is very wrong. The media has not been able to discern and distinguish who is actually responsible and put the blame where it lies and not on innocent people who are actually just doing the right thing,” he stated.

Saccone contrasted media coverage of this event to the “100 days in Portland where people were burning, looting, setting police cars on fire, people were getting killed, but [there was] no mention. Those are ‘peaceful protests’ according to the media, but our peaceful protest is an ‘insurrection’ This kind of thing has got to stop in our country, we have to be fair-minded and look for the whole truth not just something that confirms our bias,” he said. (Sources here, here and here.)

He further criticized the security policy of the Capitol, stating that when he was in the state legislature, it was normal to “let the protesters in right up to the door of the House [chamber]” while they were in session he said. “We didn’t go cower to our desks. We stayed there and we couldn’t even hear ourselves talk sometimes because they were chanting right outside the door. But we didn’t try to throw them out, we didn’t shoot anybody … and we didn’t cancel session for it.”

This same policy held true in other states such as Wisconsin in 2011, when hundreds of radical left protesters were allowed to occupy the state capitol for two straight weeks, causing significant and costly damage to the building and grounds.

Furthermore, during confirmation hearings for Supreme Court Justice Bret Kavanaugh in 2018, pro-abortion protests were sponsored by Planned Parenthood, NARAL, and others, and 128 people were arrested by Capitol Hill police for “unlawfully demonstrating” outside of senators’ offices.

Following media coverage of Saccone’s Facebook posts, St. Vincent College officials launched an immediate investigation. In response, the former representative resigned. “I decided to resign for the betterment of the school,” Saccone told the Tribune-Review. “I’ve been there 21 years. I didn’t want all this terrible media kerfuffle to tarnish the school. I decided it would be better if I just resigned,” he said.

LIVE: President Trump’s speech at the March to Save America