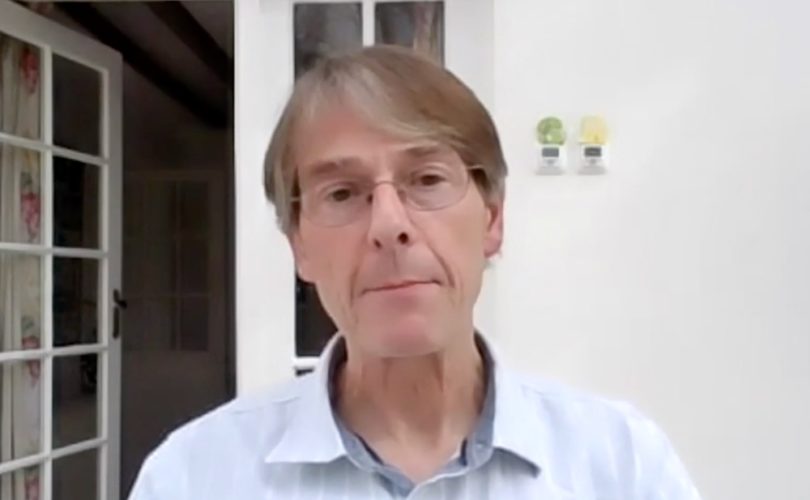 (LifeSiteNews) — Former Pfizer Vice President Dr. Michael Yeadon expressed alarm regarding the implementation of “vaccine passports” throughout Europe and showed why these impositions have nothing to do with public health but are all about “totalitarian control.”

“All around Europe we are either one minute to midnight, or two minutes to midnight,” said the British national at a symposium sponsored by Doctors for Covid Ethics.

Yeadon’s talk begins at 1:13:30, a shorter video with his key quotes is available here

The authorities are adopting a method of incremental implementation of vaccine passports, according to Yeadon. “They’ll start with places you probably don’t go, like if you’re my age, you’re probably not going to nightclubs. So, I’m not personally affected by the news that you’ll need a vax pass to demonstrate that you’ve been vaccinated before you can get into a nightclub.”

“But that’s how they do it. It’s like dropping a cancerous cell into your body and you’re not noticing because you’re immunocompromised and it grows and metastasizes and then it kills you,” he continued. “And that’s what these [vax passes] are going to do. So don’t tolerate them anywhere in your country. The system will form itself, and I cannot see a way of removing them.”

“Once these things are in your country and being used to regulate access to essential services like food, money, fuel, trains and things like that, you’ll never get rid of it,” Yeadon said. “We’ve got to stop it beforehand.”

“You will lose the ability to decide where to be at any time,” he predicted. “The vax pass will be used to regulate entry and exit from almost any controlled space, possibly even including your own home.”

Additionally, “you’ll be required to keep your vaccine passport up to date by being fully jabbed,” and currently “‘fully vaccinated’ means two injections, but it’ll soon mean three, then four, then five. So, I wouldn’t say that’s the end of them.”

Yeadon lamented that “I think gradually it will kill a lot of people. I don’t know if it’s really [a] depopulation [agenda], but it’s going to cause huge amounts of deaths.”

How to stop vaccinations and passports

At a loss as to how to stop this “control system” from being imposed upon populations across the world, Yeadon said “the more people who know that this is a con and are willing to say [so] to other people” is the only option that can work.

Having unsuccessfully attempted to lobby politicians in the U.K., Yeadon concluded that “it’s not going to be political leadership that will save us,” nor did he observe much evidence that religious communities will effectively join the fray.

“So, if it’s not politicians and it’s not the religious groups, it’s us folks” who are left to defend fundamental freedoms, he said to his audience, urging them to literally go out into the streets and the pubs and talk about it with others.

He then went on to provide some talking points on how to convince family, friends and strangers that they are “being conned” by the government.

First, he addressed “the only possible argument” public health entities could advance to support vaccine passports, and this includes the notion that a vaccinated person is “safer to be around,” presuming that the shots “reduced transmission to others.”

Secondly, the COVID-19 gene-based vaccines cannot be about health because if they were, those “who’ve already been infected with the virus [and recovered],” thus having developed natural immunity, “would be excused from such injections.”

“Why would you waste money giving them to someone who already has superior immunity to anything you get from the vaccine? Also, it’s dangerous to vaccinate people who’ve already recovered from the disease in question,” he said.

Thirdly, if it was about health, “they wouldn’t give it to children either, because in the main, healthy children don’t get ill with this virus. They don’t die [and] because they don’t get ill, they don’t transmit it either. But we’re injecting children. It’s awful. I feel terrible [about it],” Yeadon said.

“And finally, if it was about public health, we wouldn’t be injecting pregnant women,” said the toxicology expert. “They have not completed what I call reproductive toxicology [studies]. We have no idea if this is harming babies in the womb or preventing eggs being fertilized because the studies are not being done.”

“So, it’s not about public health. What is it about? [It’s about] totalitarian control, it’s a control system” being put in place, he said. “Here’s the two last things I would say: it’s totalitarian, so it covers absolutely every aspect of your lives. There’s no hiding place. [And] it’s permanent.”

“Aldous Huxley said, scientific and technical tyrannies never go away. It’s not like religious or political ones, where you can get tired and kill them. Scientific tyrannies in place tend to deepen. So, it’s permanent, it’s totalitarian and it’s nearly here,” Yeadon warned.

Viganò to anti-vax passport protesters: ‘The pandemic is being used to bring about the Great Reset’