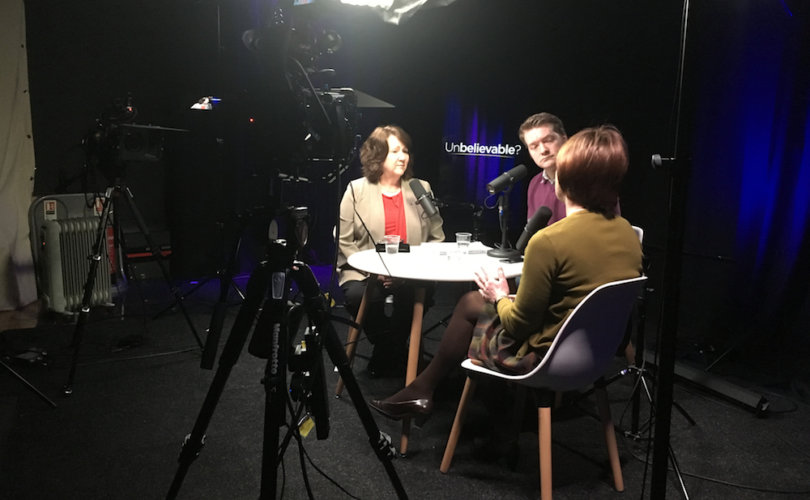 On the trolley in the middle of the room was a woman prepared for the medical procedure. Into the room came another woman, the person tasked with carrying out that procedure.

As the visitor watched, she was struck by two things: the fact that no one spoke to the woman lying on the trolley in the middle of the room; and that the darkness all around was intended to conceal the identity of the other woman whom the visitor assumed was a doctor.

Then it began: the noise of the suction machine, followed by a sickening thud as human remains hit the tubing and passed into a large glass jar. Once the procedure was finished, the visitor was told to take the jar to a hatch to the side of the room. After the jar was deposited there, the visitor was told to leave the room with one of the attendants who also had been present throughout. The woman on the trolley and the doctor remained in the semi-gloom and in the ensuing silence.

The visitor was then taken into another room where the jar’s contents were emptied onto a tray. It was then that she was asked to ensure that all the body parts be accounted for. She remembers: “As a mother of young children, my first day in the abortion unit was the most difficult. Abortions well into the second trimester were done. I was horrified at the tiny human body parts as we struggled to piece them back together in a little glass bowl.” When she had done this, and all had been counted and noted, the attendant returned to the room and told the female doctor that she could leave, and the woman on the trolley was wheeled away.

Some of the body parts were collected from the tray and placed in a nearby large freezer known by the employees there as “the nursery.” Other parts were disposed of in the normal fashion — through the city sewer system.

That day, the visitor witnessed this same procedure all day. She reckons that it happened on at least 30 occasions, 30 times when she helped account for and then empty that same jar’s contents.

On leaving the facility that night, and as she drove home, all she could think about were the body parts of unborn infants swirling through the city sewers.

“(That day) I had seen it with my own eyes, and I knew that abortion was murder.”

The visitor was Sue Thayer. It was in the late summer of 1991 when Thayer visited a Planned Parenthood facility in Des Moines, Iowa. She had joined the organization only months before but quickly had begun to ascend its corporate ladder and had obtained the position of manager at another facility.

Part of her management induction was that she had to witness firsthand a surgical abortion. It was made clear to her that this was a non-negotiable part of her training.

Up until then, Thayer had been involved in family planning, birth control, and what was loosely described as “sex education.” The center where she worked in Storm Lake did not carry out surgical abortions, however.

With some degree of innocence, she admits that she had never really thought about what abortion entailed. Surprisingly, in hindsight, she did feel that abortion was wrong, but she chose to think that her work at Storm Lake Planned Parenthood was somehow different.

The experience she encountered that day in Des Moines did not ostensibly change her views. After that day, however, she was aware that she could no longer claim that she didn’t know what an abortion entailed, or that her work was unrelated to abortion.

Decades later, she looks back upon that day and realizes that it changed her forever.

Thayer was born in Storm Lake. She has lived there all her life. In April 1991, a job appeared at the local Planned Parenthood facility and she applied. “No little girl ever dreams of growing up and having an abortion. Nor does any child imagine ever working in the abortion industry. It simply happens.

“The salary is generous and, once employed, it can be tough to walk away from the money. Some are drawn in by the thrill, the controversy, perhaps, just morbid curiosity. Yes, some workers begin simply because they want to see and to know —  what exactly is an abortion?”

Soon Thayer was on the corporate fast track, with the experience in Des Moines part of a corporate “rite of passage.” She looks back now and sees that there were those in Planned Parenthood scrutinizing their employees’ reactions to being so close to abortion in all its hideous reality. Some abandoned Planned Parenthood at this point, many others persisted and went on to embrace the organization and its ethos. It was said of these latter individuals: “They could handle it.”

Many years later, Thayer is clear about what this process is really about. “It is a slow process of brainwashing. In the early 1990s, we were very comfortable referring to an unborn baby as a ‘clump of cells,’ ‘contents of uterus’ or ‘products of conception.’ Perhaps this is how hearts are hardened to the reality of abortion. This is also how we explained the abortion process to a woman. We went so far as to tell her that the process is just like having a heavy period.”

Today, Thayer works for 40 Days for Life. Her passing through the Dark Valley of Planned Parenthood to the role of sidewalk counselor is a remarkable one. She has no doubt what is at the root of that: God’s mercy. She is clear that even our bad decisions can be made better ones through the grace of God. “For me, the process of coming to see the truth was long and slow. As a mom, it hurt me every time I was in, or even near, the abortion unit,” she said. “As my heart softened, I knew my days in the abortion industry were numbered.”

In the end, Thayer was, in 2008, fired from her post at Planned Parenthood. The introduction of webcam abortions was the final straw. Many would have walked away from the whole sorry business of abortion with a mixture of guilt at the horror in which they had taken part and some degree of relief at finally being free of it. Thayer took a different if related path.

“I signed up to lead a 40 Days for Life campaign at the facility I had managed. This meant 40 solid days, praying for 12 hours daily outside Planned Parenthood,” she said. “As a longtime manager, I was well known in my small rural town. Now, I was going to be enlisting others to join me there to pray. Worst of all, I would have to face my former co-workers.”

The prospect of this filled her with terror. Pro-life sidewalk witness outside an abortion facility is never easy. To give that witness at a place where one has worked and is known is even more so. Thayer faced the inevitable opposition, both from within that facility and from some of the public on the outside.

It was then that Thayer discovered something about this form of witness. She found that the more she witnessed to the innocents being destroyed, her Christian faith deepened. “God provided: faith, boldness, courage, and lots of people willing to pray. Many different churches and groups came together to pray during those 40 days,” she said. “What happened was a genuine miracle. Friendships were made. Women learned the truth. Hearts were turned toward life.”

She also noted something that happens inside abortion facilities when a pro-life witness takes place outside. She remembers the Planned Parenthood staff remarking that it was “chaos” in the facility while such a witness prayed outside. In the case of Thayer’s witness, however, the most impressive thing of all happened at the end of that 40 days: “The abortion facility closed!”

No matter the cost or the dangers involved, Thayer has committed the rest of her life to the pro-life cause. She travels the world to speak of the dark void at the heart of the multimillion dollar abortion industry.

She has experienced this darkness from the inside – both professionally and personally. She knows the damage it does to all concerned. She wants to help others who are working in the abortion industry, especially Planned Parenthood employees: those men and women who want and need help to escape its mindset, those who wish to escape from its lies to the truth, and experience the mercy that awaits them all — something to which Thayer can personally attest.

It seems that the prayers offered outside these facilities move not just the women on their way there for appointments but reach the employees inside.

“We learned that prayer works because God hears us. 40 Days for Life is successful and is growing fast, simply because God cares, and He answers,” she said.