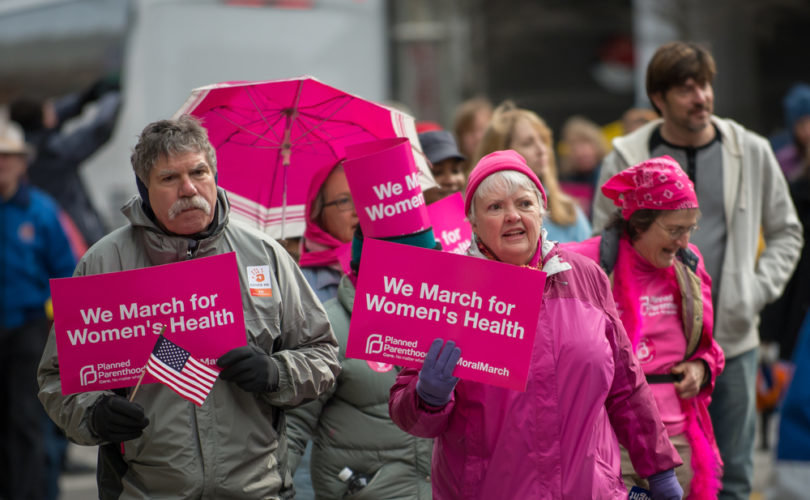 Supporters of Planned Parenthood march in support of the abortion giant in Raleigh on Feb. 8, 2014Shutterstock

INDIANAPOLIS, IN, February 14, 2014 (LifeSiteNews.com) – A former Planned Parenthood worker has opened up to a diocesan newspaper in a gripping tell-all interview, saying she was shocked at the horrors she witnessed during the two years she worked in Indiana’s largest abortion facility.

Marianne Anderson is a nurse who assisted Planned Parenthood abortionists by partially sedating women who paid extra for that luxury.  She told The Criterion newspaper that she saw many women pressured into abortions they did not want, including minor girls.

“One young girl came in with her mom,” Anderson told the paper.  “She was about 16. Her mom had made the appointment. That’s not supposed to be how it works. It’s supposed to only be the patient who makes the appointment. I checked her in, and she thought she was there for a prenatal checkup. The mom was pushing it. She blindsided her own daughter.”

Another time, said Anderson, “This guy brought in a Korean girl. I had no doubt in my mind this girl was a sex slave. This guy would not leave her side. They could barely communicate. He wanted to make all the arrangements.  During the ultrasound, she told one of the nurses that there were lots of girls in the house, and that the man hits them. She never came back for the abortion. I always wondered what happened to her. One of my co-workers said, ‘You’re better off to just let it go.’”

When women cried during the abortion procedure, Anderson said, abortionist Michael King would shame them. “These girls would start crying on the table, and Dr. King would say, ‘Now you chose to be here. Sit still. I don’t have time for this.’”

“One doctor, when he was in the POC [products of conception] room, would talk to the aborted baby while looking for all the parts. ‘Come on, little arm, I know you’re here! Now you stop hiding from me!’ It just made me sick to my stomach,” Anderson said. “The sound the suction machine made when it turned on still haunts me.”

Anderson told The Criterion she started working at the facility because she believed that as long as women were having abortions, they should be safe about it.

But Anderson quickly abandoned her illusions of safety once she began work at Planned Parenthood.  “I started feeling uneasy working there when people came from national in New York City to teach us the conscious sedation process,” Anderson told the paper.  “It was disgusting. These two ladies had this chant they would do: ‘Abortion all the time!’ I thought, ‘I’ve got to get out of here.’ That was about six to eight months after I started.”

Anderson said the overall experience of working for Planned Parenthood was “absolutely miserable.”

“It was a money-grubbing, evil, very sad, sad place to work,” she said. “I was always getting in trouble for talking too long to the girls, asking if they were sure they wanted to do this.”

“You have to have so many [abortions] a month to stay open,” Anderson said. “In our meetings they’d tell us, ‘If abortions are down, you could get sent home early and not get as many hours.’”

Anderson finally escaped her job at Planned Parenthood with assistance from Abby Johnson, a former Planned Parenthood director who runs the charity And Then There Were None, which is dedicated to helping abortion clinic workers leave the industry. After reading Johnson’s book Unplanned, Anderson reached out to Johnson via social media and told her she wanted to get out.

Johnson put her in touch with Eileen Hartman, a local pro-life leader who immediately jumped into action, helping Anderson polish her resume and setting up job interviews with local hospitals and doctors.

Anderson was fired by Planned Parenthood in July 2012, but was immediately hired by Community North Hospital, where she is now a nurse.  “I was mad because I wanted to quit,” Anderson said. But she added, “I love my job now. I work with wonderful, Christian people. I just love it.”

To help her deal with the remorse she feels over the two years she spent helping abortionists take babies’ lives, Anderson attended a retreat put on by Johnson’s group, and now prays daily for the babies whose abortions she was part of.

It took Anderson a while to decide to go public with her story, but now that she has, she says she is ready to return to Planned Parenthood.  This time, she’ll be a sidewalk counselor, praying for abortion-minded women and encouraging them to choose life.

Correction 02/14/14: This article originally stated that  Marianne Anderson is a Roman Catholic. This is incorrect. LifeSiteNews.com apologizes for the error.

Read the complete interview with Marianne Anderson at The Criterion.