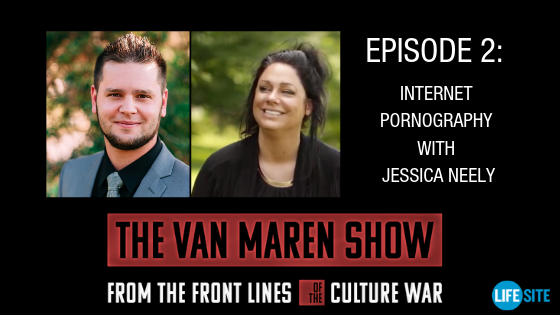 January 31, 2019 (LifeSiteNews) – Jessica Neely was raised in a conservative Christian home. The daughter of a pastor who spent her youth involved in a myriad of extracurricular and pro-family activities, her life took a turn for the worse when, in the early 2000s, she was raped at the age of 23.

Unsure of how to deal with the trauma of her experience, Neely, an abstinence missionary at the time, was intent on getting revenge. “I assumed everything from that moment was over and destroyed,” so “I lived like it,” she says in this episode of The Van Maren Show. “I was going to rape men back.”

Neely shares not only her own experience with human trafficking, prostitution, and drug abuse, but also the devastating impact – psychological as well as physical – pornography has on women, on men, and on those who produce it.

Neely now lives what she calls “the surrendered life,” free from pornography and addiction. A widely-known speaker who warns audiences, especially young women, about the dangers of pornography, she tells The Van Maren Show, “nothing in this life is worth compromising your family for.”

The Van Maren Show is hosted on numerous platforms, including Spotify, SoundCloud, and YouTube, so you can listen by clicking the links. We are awaiting approval through iTunes and Google Play as well.​