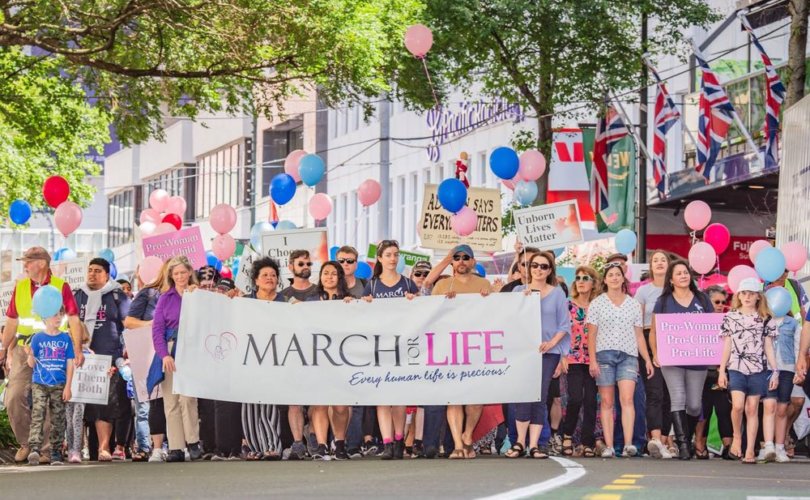 The presence of Sir English and National MPs Simon O’Connor and Alfred Ngaro encouraged the 1,200-strong crowd who travelled from all over New Zealand to defend human life from its very first moment of existence, conception.

Marching down the main street of Wellington, the diverse group stopped traffic and drew people out of stores as they joyfully witnessed to the preciousness of human life and denounced abortion.

As the crowd gathered on the front lawn at Parliament, MP Simon O’Connor noted how rare it was for the forecourt to be filled to such a capacity. He then went on to announce, “I am a proud pro-life man and New Zealander.”

“Ladies and gentleman,” O’Connor stated, “you are making a proud, strong statement today. Life matters. Never be ashamed to be pro-life. Life from conception to death. How could anyone be against that?”

Speaking of pro-abortion campaigners, O’Connor noted how they fear the pro-life movement. “They will attempt to silence us…and I hope with your voices, we will not be silenced! We will always stand for life!”

Alfred Ngaro, a current Member of Parliament, acknowledged the solemnity of the occasion.

“Today is a difficult day,” he said, “because as we were walking, as we march, our heart also feels for those who are not here. Half a million children have lost their lives since the 1970s.”

Noting that the cause was one of compassion and not judgement, Ngaro proclaimed, “in this country we value the lives of children as soon as they are conceived in the womb…that’s the bottom line.”

He also challenged those present to be there for pregnant women, sending a message to the community that “we love them” and “that we care for them.”

The first National March for Life was held in 2018 to commemorate the 40th anniversary of abortion legislation in New Zealand and the more than 500,000 lives lost to abortion. Six hundred people participated in that March.

Abortion law reform is a high priority for the current Labour government. Under the leadership of Prime Minister Jacinda Ardern, steps are being taken to remove abortion from the Crimes Act and address the deadly procedure as a “health issue.” The proposed models include abortion on demand until birth.