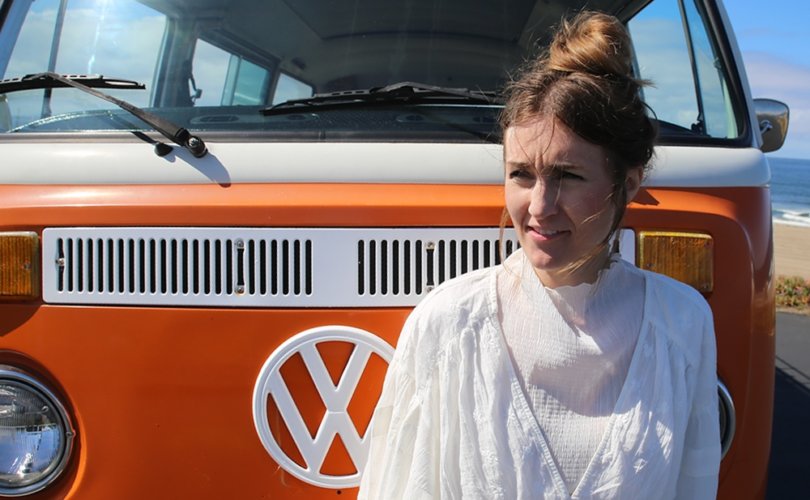 The duo ended up producing something quite different – a sprawling, visually and intellectually engaging documentary to benefit the entire world.

Alana, a talented secular musician who gave up her musical career for life, family, and love, remains at the heart of the final product, sharing how through desperation to know her father she finds herself discovering the treasures of St. John Paul II’s Theology of the Body and Pope Paul VI’s encyclical Humanae Vitae, both on the topics of love and marriage.

And perhaps not surprisingly, Alana and Rickard’s search for truth led them to a place neither anticipated at the outset of their quest:  Both experienced a dramatic conversion to Catholicism.

Sexual Revolution seeks to examine the effects of the free-love experiment of the hippie generation and the prophetic encyclical, Humanae Vitae, while closely examining the history of the parallel developments of the Pill and modern Natural Family Planning (NFP).

The movie captures the mood of the era with its lush musical soundtrack featuring artists such as Joni Mitchell, The Byrds, Eric Clapton, Neil Diamond, Paul McCartney, and Crosby, Stills, Nash & Young.

LifeSiteNews reached out to Alana Newman in order to better understand how and why she and husband, Rickard, devoted seven years of their lives to this project.

LifeSiteNews:  Alana, most of our readers don’t know your personal story regarding third party reproduction.  Can you speak a little about that so our readers understand the deep yearning that compelled you to launch this project?

Alana: I have never met my biological father. And actually, neither has my mother. This is because my mother's first husband was infertile and they decided to use an anonymous donor to conceive me.

My husband started filming me soon after we met and the original thought behind this film was that we were going to search for, discover and meet my father.  The only thing I knew about this man who makes up half my genes is that he was ethnically Polish and raised Catholic—so in my efforts to learn more about my long lost Polish and Catholic heritage I picked up an interest in the most famous Polish Catholic man I was aware of, Pope John Paul II.

So in the more important sense, I did come to know and embrace my father during the making of this film—God, the Father. I am continually blown away by the wisdom the Church offers—it's like discovering a well when you've been wandering in the desert by yourself for years.

LifeSiteNews:  How did the movie take shape?  The idea of pairing the sexual revolution with the Humanae Vitae, while also pairing the parallel developments of the Pill and modern Natural Family Planning (NFP) by telling the stories of Dr. Pincus and the Drs. Billings is awesome.  How did that come together?

Alana: My husband began filming shortly after we met. It was going to be about my donor-conception story. Then at some point we became very interested in finding solutions to infertility.  I realized that two major causes of infertility could be generalized as our toxic environment and our toxic behaviors. Hormonal contraceptives make massive, negative contributions to both our toxic environment (via synthetic estrogens) as well as our toxic behaviors (STD induced infertility, delayed childbearing, mistrust between genders, etc.). So I developed a passionate conviction that hormonal contraceptives were evil.

But as a woman in my 20's and now early 30's, I truly understand the fears and responsibilities associated with pregnancy and childrearing. It is very important to me to be able to enjoy intimacy, while confidently being able to manage and space my children. That is where my interest in Natural Family Planning took root.

Luckily, my husband stumbled upon The Billings Ovulation Method at a conference for Family Life Directors and we felt like God really loved us by revealing to us an NFP method that is so simple and intuitive. He bought a couple of books, one called The Billings Enigma, and previously having read The Birth of The Pill by Jonathan Eig he realized that there was an intense spiritual battle going on during the 50's and 60's.  It was only a small group of people responsible for the invention of The Pill, and only a small group of people involved in discovering modern NFP—and if you examine their stories and the timeline you can really see God's hand at work, His mercy, and creativity.

I think viewers of this film will be struck with the level of investigative journalism that went into it—and when they learn about the differences in how these two different forms of family planning were developed, I imagine many people might have their faith strengthened significantly.

LifeSiteNews:  You say that the experts you interviewed were not only instrumental in making the movie, but also helped you and Rickard on the way to your conversion to the Catholic Church.  What happened?

Alana:  People will see me in the film and think that I'm a regular conservative Catholic white lady with some kids living in the suburbs. What they don't realize is that I used to be a militant feminist volunteer for NARAL that dated women and went to atheist club meetings at a German bar in San Francisco.

I discovered the marriage and family work of Elizabeth Marquardt and David Blankenhorn at The Institute for American Values. Then through them I met some incredible Catholic thinkers like Professor Robert George, Mark Regnerus, Mary Eberstadt, Jennifer Roback Morse, and others. Reading these people's work, I was struck first by how well they seemed to articulate human nature. Secondly, they didn't back off or back down when peer pressure became too intense.

It was the hardcore Catholics that showed backbone and courage under fire. Clear language and good ideas regarding marriage and family were the tools I needed to cultivate a family of my own. Thank you to all of you who stand fiercely behind Church wisdom on these topics. Your steadfastness matters.

LifeSiteNews:  Our readers are highly engaged in pro-life, pro-marriage, and pro-family issues, often as local activists.  How will your movie aid them in promoting a culture of life in their parishes and local communities?

Alana:  Films are the preferred way of communicating ideas for most people today. With film you get the opportunity to communicate through not only words, but also body language, iconography, fashion, and music.

Film is communal.  It starts conversations. And it can be an event—an excuse to gather. 500 people can sit side by side and watch a film and discuss it immediately afterwards.

Films are also difficult to make. A well done film that promotes Church teaching on human ecology is rare—so this is a great opportunity for parishes and pro-family organizations to share the wisdom the Church has revealed to us, in a popular and easy-to-digest format.

LifeSiteNews:  What do you hope people will take away from your movie?  What role do you think it can play to advance a culture of life?

Alana:  I want people to see this film and want to learn NFP, or make the move to become an NFP instructor.

Natural Family Planning is the practical application of Theology of The Body.  Learning how to chart is like learning how to read music, and it eventually offers total bliss from being able to take those notes on a page and make real music with your body.

NFP advances a culture of life because it reconnects sex and babies in people's imagination. It means that every time a man approaches a woman for sex, he can't help but recognize the power of her body to make new human beings. That recognition of power is the beginning of respect.

Arrange a Screening of Sexual Revolution

Sexual Revolution is available for screenings at churches, schools, and other organizations and events for a small licensing fee.  To bring this groundbreaking documentary to your parish, school, or organization, visit https://www.sexualrevolutionmovie.com/screenings.html.