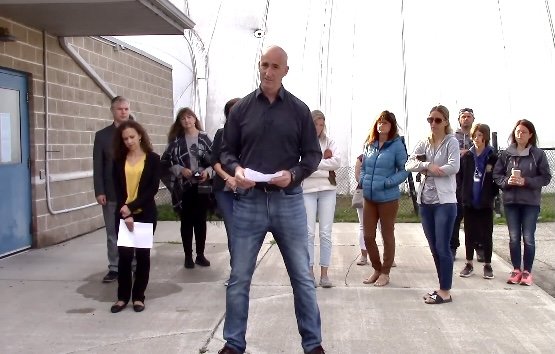 Former NHL player Steve McKenna, who is now a police officer, sounded off against vaccine mandates.YouTube

Former NHLer Steve McKenna says it “broke his heart” to ask that his local rink remove a jersey he donated to them due to a “policy that segregates society.”

“Twenty years ago, I took great pride in donating one of my NHL jerseys to the Hespeler Arena to hang on the wall with the other NHL jerseys that came before me. I thought it might inspire the next generation to reach a level where they too can have their jersey on display, just as those inspired me when I was little,” McKenna said Saturday at a press conference at the Com Dev Indoor Soccer Park put together by Belinda Karahalios, an Independent Cambridge MPP.

“It broke my heart when I had asked the Minister of Sport and the deputy city manager of Cambridge to have my jersey removed from the (Hespeler) arena because our family can’t support a facility that is not accessible to all families,” he continued. “How can we, as Canadians, support a policy that segregates society and in doing so damages the futures of thousands of children?”

“So today I am calling on the Ford government to include parents and guardians who are accompanying a child under the age of 18 under the exemption from having to disclose their vaccination status,”  Karahalios added.

“Barring adults from entering the building in which their young children are playing compromises the comfort and safety of many young athletes and keeping them out is not a reasonable ask for sports organizations or their volunteers.”

Karahalios sent a letter to the provincial Minister of Health Christine Elliott and Minister of Heritage, Sport, Tourism and Culture Industries Lisa MacLeod, “demanding that they rethink this regulation and include parents and guardians in this exemption.”

Ontario rules mandate that all people entering recreational facilities must prove they have had both doses of the COVID jabs. Exemptions exist for kids under 18 who are not required to show proof. However, if their parents are not jabbed, they are not allowed entry, even to watch their kids play.

The Ontario Minor Hockey Association’s own rules are stricter than the province’s, however, mandating that all players 12 and up have the jab or they are not allowed to play.

Karahalios has been an outspoken critic of vaccine passports and mandates and was booted from Ford’s party for opposing COVID lockdowns.

‘Nothing I experienced in those other countries compared to what we were experiencing here in Canada 20 years ago.’

McKenna grew up playing hockey in Hespeler, which today is part of Cambridge, and now works as a Waterloo Regional Police Service constable.

He said the rule banning the unjabbed from recreational facilities means “thousands of children that rely on parents and family to help them get dressed and prepare for their activity would in turn be excluded from participating in sports.”

“That great pride has been replaced with sadness and anger. When I learned that parents will be barred from entering the city-run arenas and recreation centers because of their medical status. This means I can’t enter the very arena where my jersey hangs on the wall,” McKenna said.

“In my previous life, I spent eight years in the NHL and then another eight years playing and coaching around the world and in Europe, Asia and even Russia. Nothing I experienced in those other countries compared to what we were experiencing here in Canada 20 years ago.”

McKenna said that sports and recreation have “long being shown by doctors and psychologists” to provide much-needed “benefits to a child’s social, mental and physical wellness.”

“How can this province not see that being healthy and active is essential to keeping all of us safe,” he said.

He thanked Karahalios for allowing this family to speak at the press conference. However, his comments were not well received by his employer, Waterloo Regional Police Service, who in a statement said they “do not represent WRPS’ organizational values.”

The COVID-19 injections approved for emergency use in Canada, including the Pfizer shots for ages 12 and up, all have connections to cells derived from aborted babies

All four have also been associated with possible severe side effects such as blood clots, rashes, miscarriages, and even heart attacks in young, healthy men, along with myocarditis (inflammation of the heart).”