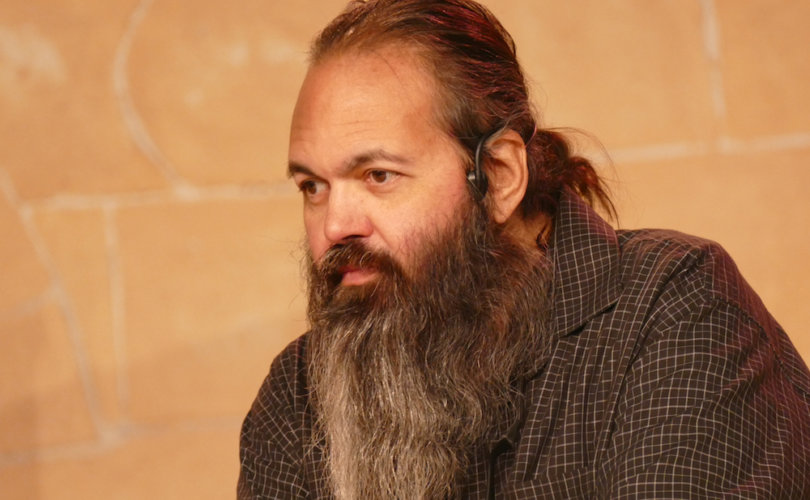 TORONTO, November 1, 2017 (LifeSiteNews) — Zachary King, a former high wizard in a satanic church who converted through the miraculous intervention of the Blessed Mother, says abortion is a spiritual battle that must be fought with spiritual weapons.

“I know abortion is a satanic sacrifice,” King said at a conference on spiritual warfare organized by Toronto-based Serviam Ministries.

“Why is the devil intent on killing the unborn?” he said. “Satan does fear certain things. Innocence is one. You can’t get more innocent than the baby in the womb.”

King, who is blind as a result of diabetes, told 800 people at the October 28 conference of his remarkable journey to the Catholic Church.

Raised in a Baptist home, King was addicted to magic at age 10, sexually assaulted by a woman teacher at age 11, and formally joined a satanic coven and sold his soul to the devil at age 13.

Three months before he turned 15, he assisted in his first ritual abortion, where the objective was to get blood on his hands.

At age 21, he was in a satanic church as high wizard, one of only a few in the world, and who are rumoured to be hand-picked by Satan. (Read his story here).

By the time he converted, King had assisted in 146 abortions.

“Every hex, we used an abortion,” he told the conference.

“The bigger thing you request from the devil, the more you have to do for the devil to get it. … A hex requires an aborted baby.”

King related how a woman came to the jewelry kiosk where he worked and told him the Blessed Mother wanted him in her army, and gave him a miraculous medal.

King still practiced magic but had abandoned his role as high wizard and fled the satanic church some three years before because he didn’t want to be there anymore.

He could have anything he wanted, yet nothing satisfied him, and he believed he had sold his soul and was going to hell, King said.

When his fist closed on the miraculous medal, King said, he found himself in a dark void with the woman, who told him everything he had done, and that it was “of the devil.”

As soon as he realized the “Blessed Mother” was the Mother of God, “she showed up,” he said.

“She smiled at me. I didn’t deserve that smile,” he said, and she took his hand, turned him around, and he saw Jesus Christ.

“I knew Jesus was my Lord and Savior.”

‘Use what you know’ to end abortion

King immediately started going to Mass, and “at the Consecration, I saw Jesus,” he said. He thought everyone had the same experience.

Similarly, when he heard of perpetual Adoration of the Blessed Sacrament, where he “could go see Jesus any time,” he was shocked there was “no line to get in.”

He began spending up to 18 hours in Adoration, took instruction, and was received into the Catholic Church in 2008.

But when she appeared to him, the Blessed Mother had also told him: “Your job is to help me end abortion.”

King had no idea how to do that, and so he asked Jesus during Adoration, “Your mother asked me to help her end abortion, but I don’t know how.”

Mary appeared to him and said, “Use what you know.”

Abortion had been legal in the United States since 1973, and “we can’t seem to shut it down,” he told the crowd.

Indeed, if everyone on Earth marched against abortion, the next day, the abortion centers would still be open, King said.

He knew it was a spiritual battle.

“It’s spiritual warfare, (but) we fight it physically,” he said. “You cannot defeat a spiritual enemy” with physical weapons.

So King, who runs All Saints Ministries, made a CD in December 2015 for priests and bishops entitled “Abortion is a satanic sacrifice,” and is also planning to publish a book.

The CD tells of his experience and suggests methods to shut down abortion centers.

King suggests holding Eucharistic processions outside abortion centers and to bring the image of Our Lady of Guadalupe.

“Imagine you’re in a place (where) there’s demons everywhere,” he said. “You show up with Jesus … It’s a bad day for the demons.”

He also advises priests to perform exorcisms and say Mass at abortion centers, which would be a “major smackdown” of the devil and his minions.

“The strongest prayer I can say is the rosary,” he said.

The Mass is the “strongest prayer of the Church. Satan has no defense” against it.

(As an aside, King advised anyone with a friend who has a problem to have a Mass said for the friend; for “many problems,” have “perpetual Masses said.”)

“What would happen if people did these things?” asked King.

Abortion centers would shut down, as they have in Texas, Louisiana and Florida, was his answer.

King knows a priest who performs an exorcism and says Mass in a van parked outside an abortion center. It has gone from being open seven days a week to three, and the number of abortions committed there has fallen from about 70 to a few.

Where a priest held eucharistic processions with 40 Days for Life, the abortion center shut down within three years, King said.

When a bishop did the same at another abortion center, it shut down in two weeks.

People can give his CD to priests and bishops, King told LifeSiteNews.

“We gave away hundreds of my CD set, ‘Abortion is a satanic sacrifice’ this year and last year, and we sold a bunch as well. We had a priest who bought 100 copies,” he said.

And if priests aren’t on for it, “heat up the bishops,” he said.

His own bishop was holding a Eucharistic procession, exorcism and Mass at the abortion center in Wichita, Kansas, that same day, he told the conference. King doesn’t expect it will be open for much longer.

“I’m hoping that I’m making the Blessed Mother happy,” he told the crowd, “because this is what I know.”