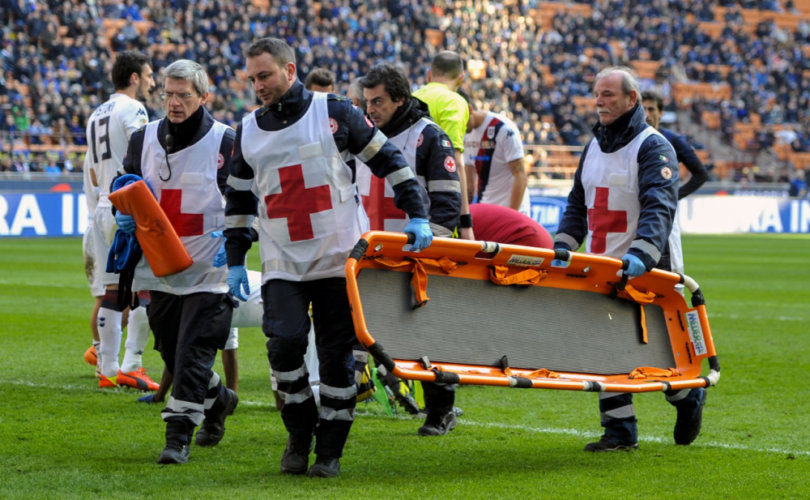 LONDON (LifeSiteNews) – A former English soccer star lamented last week that no one is paying attention to the sudden rise in deaths of athletes that has taken place since the introduction of the COVID shots.

Speaking last Thursday to Mark Steyn for GBNews, former English soccer star Matt Le Tissier stated that the lack of investigation into the sudden increase of deaths of young athletes is a scandal and so is what he calls a normalization of it in the mainstream media.

“I have seen so many people, so many incidents of young, fit, healthy sports people collapsing on the field of play,” Le Tissier told Steyn. “And it’s just not normal, and yet the media seems to be normalizing it, and nobody seems to be paying any attention whatsoever to this huge rise that has gone on, and for the authorities in charge of these sports to not notice it or not calling an investigation I think is absolutely scandalous.”

“I have been trying and hopefully I’ll get a meeting soon with the powers that be in (soccer) to try and put evidence before them to show them just what is happening, because they don’t seem to want to investigate it themselves, and I think that’s criminal,” Le Tissier concluded.

Last year saw a sudden rise in heart attacks and illnesses in dozens of athletes from multiple sports. Medical experts such as former Pfizer vice president Dr. Michael Yeadon have linked the sudden onset of illness to the vaccines. Indeed, the Centers for Disease Control and Prevention (CDC) recognized the correlation between myocarditis, a dangerous inflammation of cardiac tissue, and the mRNA-developed COVID shots in June 2021, declaring a “likely association” between the two.

Le Tissier has previously voiced concern over the role of the shots in the sudden onset of illness in sports.

Last November, after John Fleck, an English soccer player, collapsed at a match, Trevor Sinclair, a former English soccer star and sports pundit, was cut off on a radio broadcast for saying that people were asking if Fleck’s illness could be linked to the jab. Le Tissier called for an investigation into the role the vaccines had in the sudden rise in heart attack and illness at matches on Twitter after Fleck’s collapse.

Le Tissier asked again in December if there was a connection between the COVID shots and the sudden illnesses in athletes after three more athletes suffered illness during matches. Le Tissier was interviewed by Oracle Films in February, discussing the sudden rise of heart attacks and illness in athletics as a possible result of the vaccines.

Recent autopsy data from multiple studies demonstrated the link between myocarditis and the COVID jabs, and a CDC study published in February by the Journal of the American Medical Association (JAMA) found that the risk for myocarditis in male youth was 133 times greater after taking the Pfizer shot.

The FDA approved a request by Pfizer and Moderna for Emergency Use Authorization (EUA) of new boosters designed to fight the Omicron variant, relying on data from existing vaccines and trials conducted on mice.