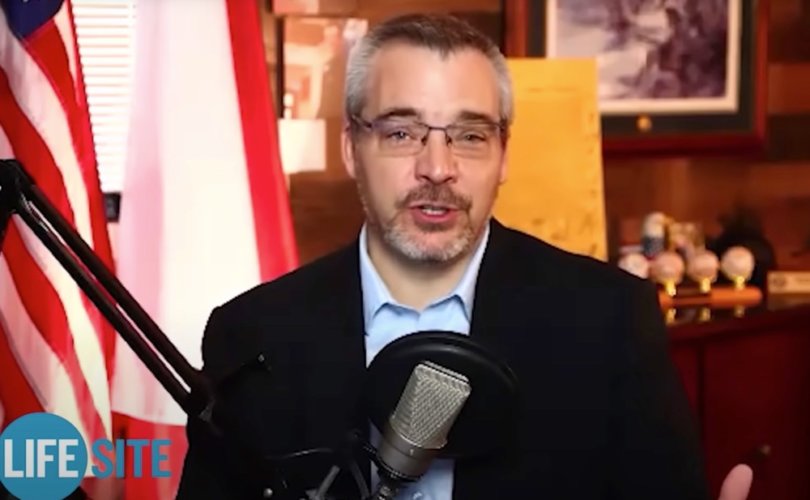 January 18, 2021 (LifeSiteNews) – As conservatives gear up for the most radical left-wing takeover of Washington in U.S. history, former Texas representative Rick Green joined LifeSiteNews to discuss how concerned citizens can fight an ongoing “assault” on freedom that Green called “beyond anything I’ve probably seen in my entire life.”

“I would encourage all citizens to be very involved in their legislative sessions in the next few weeks and months, to tighten up election laws and do the things that Congress failed to do here and that courts failed to do,” he said.

“We will not save the republic if we do not restore faith in the elections, and that begins at the local level at each of these states,” Rep. Green added. “We can do it at the state level. That’s absolutely possible, and frankly, it’s the right place to start.”

“Any election reform has to guarantee three things: transparency, verification of the vote when it’s close, and legal remedies whenever the law is violated,” Green said, stressing the need for voter ID reform, in particular.

Sixteen states and Washington D.C. allow voters to cast ballots without presenting any form of identification or otherwise confirming their identity. Competitive states with no voter ID requirements include Nevada and Pennsylvania, the latter of which has a GOP-controlled legislature.

Violations of state voter ID laws led to major election irregularities in 2020. In Wisconsin, for example, Democratic officials encouraged voters to the get around the state’s strong ID requirements by declaring themselves “indefinitely confined” due to COVID-19.

Seven Republican states sued Wisconsin over these issues as part of last December’s Texas lawsuit which the Supreme Court dismissed due to alleged “lack of standing.”

“Republicans and conservatives have to realize what’s happening right now,” Rep. Green said. “Some of our side is still in high school debate mode, following all the rules to a tee, and even getting hung up on technicalities of rules, while the other side is literally in the trench scratching and crawling for a radical transformation of America.”

“I don’t advocate breaking the rules or violating the Constitution but I absolutely do advocate using whatever means are at our fingertips, constitutionally and legally,” he continued, floating the possibility of adding new constitutional amendments through state legislatures.

“Unfortunately, a lot of the election law precedent… is going to require a governor to change it,” Green said. Michigan, Pennsylvania, and Wisconsin – all of which experienced serious election problems in 2020 – have Republican legislatives majorities but Democratic governors.

“Fortunately, an Article V convention of states has nothing to do with the governors or Congress. We can do that entirely with the state legislature,” Green noted.

Article V of the Constitution states that new amendments can be proposed “on the Application of the Legislatures of two thirds of the several States” if they “call a Convention.” The provision has yet to be successfully used to change the Constitution.

Thirty-four legislatures would have to vote to call for a convention and thirty-eight would need to ratify any amendment proposals. Republicans control thirty state legislatures, as well as the state senates of Alaska and Minnesota.

Alternatively, pro-life activists have been pushing for cities and counties simply to refuse to implement federal pro-abortion policies, mirroring the larger Second Amendment Sanctuary movement. More than a dozen local jurisdictions have become pro-life “Safe Cities” so far, while over one third of all U.S. counties have passed resolutions to protect the constitutional right to bear arms.

The conservative “sanctuary” movement appears to be expanding further amid the COVID-19 crisis, with some counties now vowing to ignore vaccine mandates or lockdown orders.

Simply leaving federal power unresisted during a Biden-Harris administration will guarantee an unparalleled “assault on the Bill of Rights,” as Rep. Green warned.

“They already signaled that they want to essentially remove the Second Amendment,” he said, adding that “the assault on the freedom of speech has been beyond anything I’ve probably seen in my entire life.”

Democrats will “use COVID to assault the freedom of assembly and freedom of religion and then, of course, they’ve threatened to pack the [Supreme] Court” which would be a “generational change.”

Democratic senators have promised that the party will work to “pack” the high court with additional justices, a move that Joe Biden has implicitly endorsed while hinting at other changes that “go well beyond packing.”

“Whether or not they’ll do it, I’ve always been one to say, take the Left at their word. When they threaten that they’re going to do something, unlike Republicans typically… I would expect that they plan to follow through,” Green said.