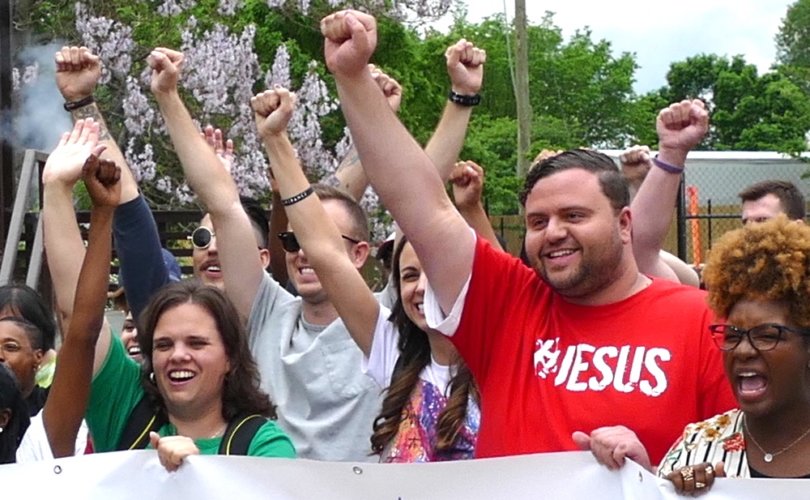 Jeffrey McCall at the Freedom March in Washington, D.C., May 5, 2018Doug Mainwaring / LifeSiteNews

WASHINGTON DC, May 7, 2018 (LifeSiteNews) – A band of young courageous ex-gays and ex-transgenders from around the United States converged on the Nation’s Capital on the weekend to proclaim in public the freedom they have found by having a relationship with Jesus Christ.

Their message stands in stark opposition to popular LGBT dogma, which until now has dominated national discourse.

The racially diverse group of mostly millennials — formerly sexually active gays and lesbians, as well as others who had lived as ‘transgenders’ (assuming the identity of a member of the opposite sex) — spoke about their personal conversion to Jesus and the freedom that comes from having a new life in Christ.

The group marched from the Washington Monument grounds toward the Ellipse in front of the White House. The banner that they carried in the public square says it all: “Freedom march.” As they carried the banner, they chanted “Jesus delivers.”

Some LGBT groups and commentators were quick to dismiss the gathering as being about “conversion therapy.”  But the young people said that this was not what they were talking about.

Their stories are not based on “reparative therapy,” so-called attempts to “pray away the gay,” or other efforts to change sexual orientation. They spoke only about conversion to Jesus Christ and embracing the new identity as an adopted child of God that goes along with that.

These men and women who have found Christ accept the reality of their same-sex attractions or transgender impulses. But what makes them different from other same-sex attracted person is that they seek their individual self-worth in Christ, not in their sexual appetites.

They attest that their attractions do not dictate their relationships. Rather than choose the now culturally acceptable and celebrated same-sex relationships, or seeking “affirmation” as a member of the opposite sex, they instead have chosen Jesus Christ, and along the way they have found what they say is genuine freedom.

Former Trans Woman:  ‘I threw it away to follow Jesus’

The improbable organizer of the Freedom March is a young man from Georgia, Jeffrey McCall.  He formerly lived as a trans “woman” and went by the name, “Scarlet.”

Instead of dressing as a woman, McCall now wears a bright red tee shirt emblazoned with ‘JESUS’ in big letters across his chest.

“I was living as a female,” McCall told the crowd. He explained that when he was younger, he saw a psychiatrist and was about to begin a series of gender transitioning surgeries.

“One night I was secretly listening to a preacher in my apartment,” recalled McCall.  “I called out to the Lord, and asked, ‘Will I ever live for you? … I’ve seen real people live for you … not just going to church; They have relationships with you, and they have peace and joy.”

“I had wanted to kill myself,” he said.  “I was spiritually bankrupt; I was destitute.”

And at that moment McCall knew he “was being convicted by the Holy Spirit that there is so much more than [what] I had been a part of.”

“And so I took all my life as Scarlet and I went to a dumpster and threw it all away—the clothes, the hair, the make-up, the jewelry, the shoes, my whole identity—I threw it away to follow Jesus.”

McCall prayed out loud while giving his talk that the testimonies given by ex-gays and ex-transgenders would help transform the lives of any who heard who were caught up in the LGBT movement.

“Father God … I thank you that the lies and deception that have been placed on our country are about to begin to break.  Lives will be transformed today. People will see, through the telling of our stories, the power of the Gospel, the power of the blood of Jesus Christ,” he said.

Pulse Nightclub Survivor: ‘Come and fall in love with Jesus and he’ll do the rest’

Another member of the band was Luis Ruiz, who survived Orlando’s horrific Pulse Nightclub massacre two years ago where 49 were killed in an act of Islam-inspired terrorism that was intended as revenge for US anti-terror policies abroad.

Ruiz chose to deliver his impassioned message on his knees.

“The Holy Spirit is pouring out,” blessings and power and “He is raising up a generation with boldness,” said Ruiz.

Appealing to the same-sex attracted around the country and the world, Ruiz issued an invitation.

“I love you guys.  LGBTQ, I love you.  I love all of you guys.  Come as you are.  Fall in love with Jesus.  He’ll do the rest. Forget [your preconceived notions] that ‘we have to become this and that,’ and that we ‘have to become a man now,’or we have to get married just to make it seem like we’re ‘church folk.’  No, no, no, no!” he said.

“Come and fall in love with Jesus and he’ll do the rest.  And then if you decide that’s not what you want, you can go right out, just like you came in,” he added.

Ruiz concluded by saying that what’s important is having a relationship with Jesus Christ.