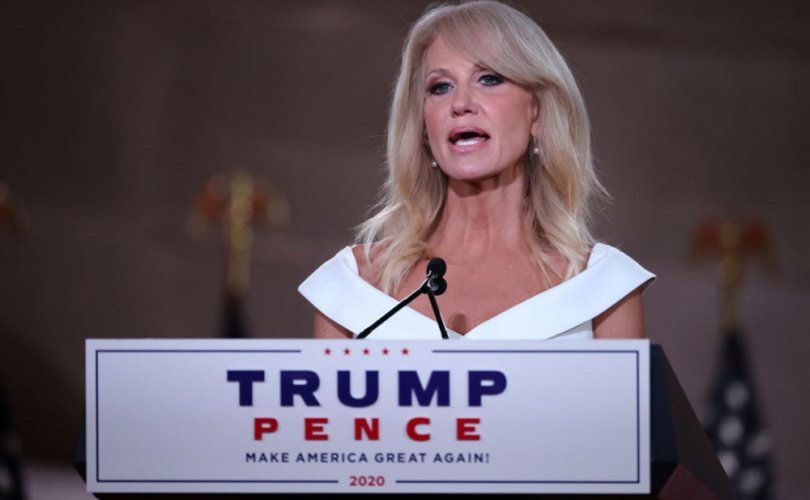 “Thanks for debate shout-out, creepy/sleepy/weepy JOE, but you lied. And don't sniff my hair, either,” Conway posted to social media platform Twitter.

Biden misquoted Conway during Tuesday night’s presidential debate with Trump, as well as during a recent interview on MSNBC.

“His own former spokesperson said, you know, riots, and chaos and violence help his cause. That’s what this is all about,” Biden said during Tuesday’s debate.

“I don’t think she said that,” Trump responded, with Biden insisting, “She said that.”

In her tweet posted earlier today Conway included a video clip of Biden saying on MSNBC: “I’ve got a quote here from Kellyanne Conway, she said, ‘the more chaos, and anarchy and vandalism [confused word] violence reigns, it equals, it’s better for us, it’s very clear choice it presents for us.’”

The video then skips to Conway’s actual quote on Fox News: “I also noticed there was a quote today from a restaurateur in Wisconsin saying, ‘Are you protesters trying to get Donald Trump re-elected?’ He knows, full stop, and I guess Mayor Pete knows, full stop, that the more chaos and anarchy and vandalism and violence reigns, the better it is for the very clear choice on who's best on public safety.”

Thanks for debate shout-out, creepy/sleepy/weepy JOE, but you lied. And don't sniff my hair, either. https://t.co/MaNckWRB2n

Last year, Flores, the 2014 Democrat nominee for lieutenant governor of Nevada, accused Biden of grabbing her shoulders, sniffing her hair, and kissing the back of her head at a campaign event, all without her consent. The charge (which the Biden camp claimed not to recall) invited the media to review Biden’s long history of inappropriate touching of women.

Video compilations of Biden sniffing the hair of girls as young as six, as well as stroking and touching inappropriately numerous young girls, have been viewed millions of times online on social media platforms such as YouTube and Twitter.

While Biden, in a clear effort to win Catholic votes, has in recent months repeatedly touted his supposed Catholic faith and his friendship with Pope Francis, Cardinal Raymond Burke stated earlier this week that Biden is “not a Catholic in good standing” because of his support for abortion, and, consequently, he “should not approach to receive Holy Communion.”