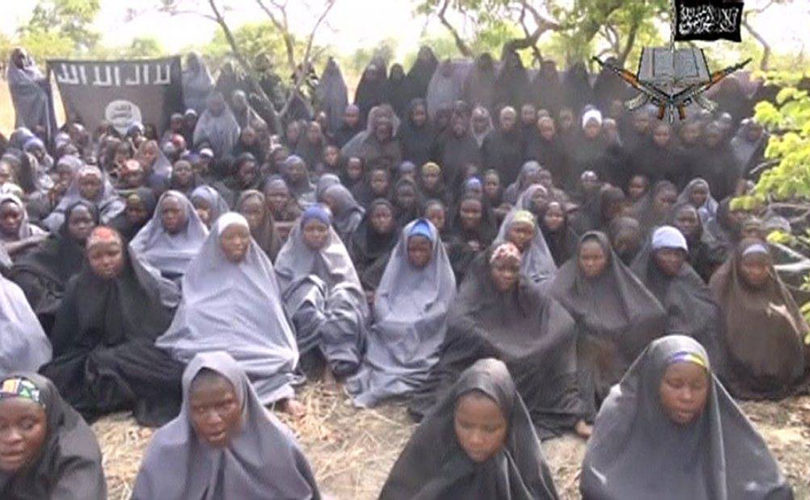 These captured Christian school girls are now reported to have all been murdered by Boko Haram.

March 31, 2015 (LifeSiteNews.com) — Former U.S. Congressman Steve Stockman was one member of the four-person U.S. Congressional Delegation sent to Nigeria in the months after the horrific kidnapping of over 250 schoolgirls (now reported all murdered) by the Islamist terrorist group Boko Haram.  He was the only Republican on the delegation.  In an exclusive interview with LifeSiteNews, Stockman confirmed that during his June 2014 delegation to Nigeria, top U.S. brass told him they had intelligence to aid the Nigerian military to “crush” the terrorist group Boko Haram, but were blocked from doing so by the Obama administration.

What was the reason for the refusal of the critical intelligence? According to Stockman it was over Nigeria’s stance against same-sex “marriage.”

“Yeah, and I hinted at that when I asked the question. I think it was acknowledged, ‘Yeah, that is the policy.’ They [the Obama administration] want to see gay ‘marriage’ adopted around the world, it’s not just in Nigeria, but it’s an active policy.”

When questioned by LifeSiteNews, the U.S. State Department categorically denied “any link between U.S. Government assistance and Nigeria’s same sex stance.” State Department spokesman Noel Clay added that the “U.S. is providing equipment, advice, training and information support for ongoing counter-Boko Haram efforts.” Such counterterrorism aid has been provided for the last several years, he said.

Despite the State Department’s attestations however, Stockman’s point about the withholding of key intel from Nigeria has been corroborated by Pentagon officials. Army Col. Steve Warren, a Pentagon spokesman told military.com in May of 2014 that the intelligence gathered by surveillance flights over Nigeria to find the schoolgirls would not be shared with President Goodluck Jonathan’s government but declined to say why the information was being withheld. “At this point, we are not sharing raw intelligence data,” Warren said.

Moreover, the Obama administration has been clear about enforcing a gay “rights” agenda throughout the world. When Nigeria signed its same-sex “marriage” prohibition into law in January last year, U.S. leaders reacted with dismay. U.S. Secretary of State John Kerry called the move “dangerous,” adding that the Obama administration saw it as “inconsistent with Nigeria's international legal obligations and undermines … democratic reforms and human rights protections.” Both Secretary Kerry and his predecessor, Hillary Clinton, have called promoting the gay “rights” agenda around the world a “top priority” for U.S. foreign policymakers.

The Nigerian-based Islamic terrorist group Boko Haram — a name meaning “Western education is forbidden” — has been internationally condemned for numerous crimes against humanity. Most notably:

Boko Haram seeks to establish an Islamic state in Nigeria through violence and terror. Earlier this month, Boko Haram pledged allegiance to ISIS, the Islamic supremacist rebel group in Iraq and Syria, infamous for beheading soldiers, civilians, and journalists and posting videos of their brutality online.

Stockman told LifeSiteNews that it was only during a private meeting requested by the American military during his visit in Nigeria that he learned about the top brass’ frustration at not being able to do more to help Nigerians defend their country because of the Obama sanctions. He said the general he spoke with was “very adamant” that the U.S. was withholding intelligence that would “help crush the radical Islamic group Boko Haram.”

“And there the leaders, generals — whatever their rank and title were — told us specifically that they wanted to give intelligence to the Nigerians for the ability to take down Boko Haram, because as you know, the United States has the ability with their satellites — obviously the NSA and other means — to track terrorist groups.”

“They’re so blind-sighted and so dedicated to the agenda, which we all know is pro-homosexual and pro-gay ’marriage,’ that they’re willing to, in my opinion, sacrifice the lives of young girls and boys who have been murdered, kidnapped, and butchered,” he said.

“So, the policy on paper seems benign. But really what’s carried out through these policies means the continued killing of young children and kids. It’s horrific.”

Stockman called it a “twisted world” in which America’s social policies for Nigeria are “prevent[ing] our government from taking actions to stop that kind of butchering.”

“For our government to bypass what is clearly in front of them is horrific,” he said.

Nigerian bishops were right, after all

Stockman’s revelation confirms accusations made by Catholic bishops in Nigeria, namely that the U.S. government’s dedication to pro-homosexual “cultural imperialism” in Africa is the reason that the Obama administration has refused Nigeria the help it so desperately needs.

“The United States actually said it would help Nigeria with Boko Haram only if we modify our laws concerning homosexuality, family planning, and birth control,” Nigerian Bishop Emmanuel Badejo of Oyo said in an interview last month.

Nigeria’s Catholic bishops backed the law prohibiting same-sex “marriage,” stating: “Nigerian Catholics do not hate men and women who are of biologically gay orientation, but strongly affirm that gay unions or ‘marriages’ are simply not in conformity with our Christian theology or traditional Nigerian morality.”

Last month in a First Plenary Meeting for 2015, the country’s bishops lamented how marital love between a husband and wife “faces relentless attack” from “pressure groups funded from within and without fighting to impose a redefinition of marriage.”

The bishops’ also condemned Boko Haram for the “loss of innocent lives” and for causing the “separation of members of the same families.”

“We are saddened by the use of young and innocent minds indoctrinated by Boko Haram and used as suicide bombers. We deplore the fact that young children are used to commit such crimes, and the fact that young Nigerians are used by politicians to intimidate and inflict violence on their political opponents is a disturbing symptom of breakdown of family values in our society,” the said.

‘Is it really true that black lives don’t matter?’

In a meeting arranged by LifeSiteNews, Stockman met with Nigerian Bishop Emmanuel Badejo in Paris, France this month.  The Nigerian bishop asked Stockman for help to end the violence.

“I really think that you can do a lot to help us, because in Nigeria people are dying in the hundreds and thousands. Is it really true that black lives don’t matter?” he asked the former Congressman in the interaction filmed by LifeSiteNews.

Stockman responded that American leaders act like black lives do not matter, noting that around the time it was revealed that 2,000 Nigerians were slaughtered in Baga, the American civil rights activist Reverend Al Sharpton called for an “emergency” meeting claiming that black actors were snubbed at the Academy Awards.

Bishop Badejo pointed out the huge disparity regarding how the world reacted when Islamist terrorists killed 12 staff from the satirical weekly magazine Charlie Hebdo in Paris on January 7 and how it reacted when Boko Haram massacred 1,998 more people in Baga around the exact same time.

“Nothing happened, nobody heard anything,” he said. “What do you say about civilization looking at all of that, and keeping quiet and ignoring it?”

Stockman told the bishop he was “embarrassed” by the U.S. having intelligence to stop Boko Haram but refusing to share it with Nigerian military.

“That’s immoral,” the bishop replied shaking his head. “I’m convinced that there are so many Americans who wouldn’t want to identify with that.”

“I’ve met a lot of Americans who are very kind and who want to make the world a better place. Can somebody help Nigeria stop Boko Haram?” the bishop asked.

“I don’t think Americans know what our policy is there,” Stockman replied.