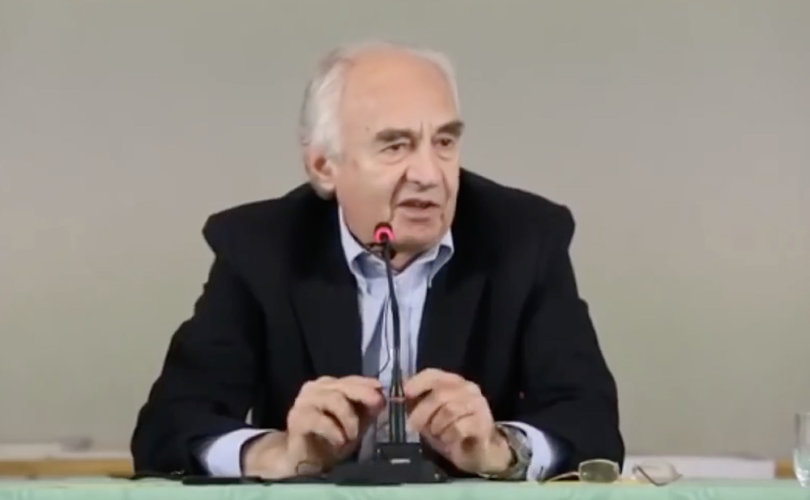 Italian economist and theologian Ettore Gotti Tedeschi, 76, wrote a critique of the new “scientism” that appeared in La Verità (“The Truth”) magazine on Sunday, ironically entitled, “Here it is! The real moral authority of this century has appeared at last: scientism.”

Scientism is normally a belief that science has all the answers. Gotti Tedeschi thinks, however, that a new kind of scientism has appeared, one in which science not only has exclusive access to truth, but its scientists are allowed to moralize and be uncritically believed.

“Everything that is surrounding the solution to the COVID pandemic, above all the vaccine proposals, has blended characteristics that I think are rather original,” the professor wrote.

“These characteristics are those of a pragmatism that is scientific but moralizing and therefore merged with certain claims of scientific fideism,” he continued.

“The apparent result seems to be a new form of scientism, reincarnated to solve the COVID problem with vaccines to be accepted fideistically [with blind faith], and perhaps nominating itself as the new moral authority of this age, one that demands an act of faith towards the modern religion, the scientific one.”

Gotti Tedeschi stated that by “scientism” he means a model of science “that wants to, and believes it can, figure out how to solve every problem, satisfying all the needs of mankind, even the moral ones.”

But science hasn’t been doing what it should do: doubt, test, offer new hypotheses. Gotti Tedeschi believes that, for over a year now, the world has been watching “men of science” face the pandemic with what seemed like good will. However, in reality these scientists have exercised a kind of “pragmatism” that has excluded other possible solutions. Even “fatal” errors, such as the unexpected deaths of patients, are being treated as if they are statistically irrelevant.

Meanwhile, these scientists seem now to expect unthinking acceptance of their ideas and, indeed, the gratitude of an adoring populace. Failure to believe, they scold, hurts everybody.

“Now this scientific pragmatism seems to ask (sometimes with a certain arrogance) a fideistic acceptance, even for moral reasons, of the medical-scientific benefits — even if not yet well tested — that must be accepted with devotion and gratitude to medical science,” the economist wrote.

“By rejecting them, [it says,] we not only risk returning to the dark ages of the bubonic plague, but also doing economic and moral damage to the community.”

Gotti Tedeschi stated that while listening to the proposals of recent weeks, he has had the impression of a model of science that “wants to moralize instead of explain and reassure, and therefore must be accepted, on every point, by faith.”

This has ushered in a new, strange, age of faith.

“Here’s … the real novelty of our time, discovered thanks to COVID,” he wrote. “According to this new model, or approach, the scientist offers a new sense of reality that excludes different theoretical hypotheses and is determined only by those authorized to do so.”

— Article continues below Petition —
PETITION: Call for Vatican to rescind restrictions on private and traditional rite Masses at St. Peter's
Show Petition Text
19382 have signed the petition.
Let's get to 20000!
Thank you for signing this petition!
Add your signature:
Show Petition Text

This proposed reality is not up for debate, even if it leaves us unable to understand or judge for ourselves, and we are forced to take it on faith.

“And this is very surprising for, after having for centuries substituted reason for religious faith, curiously today we are inviting the human being to have faith without the ability to reason,” Gotti Tedeschi added.

The writer then cited the Austrian-British philosopher Sir Karl Popper, a critic of the traditional approach to the scientific method of acquiring knowledge, saying that Popper would have rejected this scientific fideism.

However, the scientific world seems confident in its theories about the coronavirus crisis and is brooking no arguments.

“I do not think I have ever witnessed a direct and public confrontation about COVID or about the vaccines between scientists of opposite opinions,” Gotti Tedeschi concluded. “Could it be that scientism does not tolerate forms of scientific ecumenism?”

Ettore Gotti Tedeschi headed the Institute for the Works of Religion (IOR), popularly known as the Vatican Bank, from 2009 until he was forced out by its board in 2012. In 2019, he stated that he believed members of the Roman Curia, the governing body of the Vatican, were capable of murdering him. In 2018, at an international pro-life conference, Gotti Tedeschi said that the recent demographic collapse of the West was planned in order to create the necessary conditions for a New World Order. He said also that the authors of this collapse were influencing the Vatican at the highest levels.