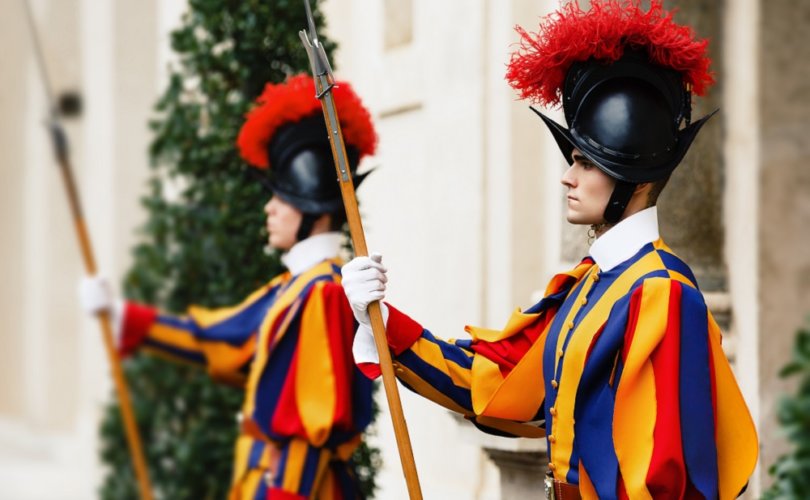 VATICAN CITY (LifeSiteNews) — A member of the Swiss Guard who lost his job after refusing an abortion-tainted COVID-19 injection penned an open letter to Vatican officials on October 8 slamming them over their vaccine mandates.

“How many of my dear colleagues have unfortunately succumbed to a medical treatment to which they did not give full consent, compelled by force, in order to regain their freedom? For me, it is fundamental to defend Freedom with determination,” Pierre-Andre Udressy wrote.

“Why should I force myself to do something I know to be absurd? Who could force me?” he asked rhetorically.

Udressy, who is one of three Swiss Guards who lost their jobs in Vatican City and had to return to Switzerland after refusing the jab, referred to the Vatican’s vaccine mandate as “scandalous” and “inhumane,”  while also stating that as a faithful Catholic he has a moral obligation to avoid medical treatments that have links to abortion, such as the experimental COVID-19 shots.

“[The Congregation for the Doctrine of Faith] clearly states that illicit vaccines, prepared from cells from aborted human fetuses, must be combated, while then admitting that in case of need their use could be accepted,” Udressy wrote.

“As a Catholic who follows the Magisterium, I have a duty to fight against the vaccine choices of the Vatican City? If one reads the documents cited, one must answer yes,” he added.

Belaboring the crucial point, Udressy explained that from his view the Vatican is not only being heavy-handed but betraying faithful Catholics and the Church’s official teachings.

Citing specifics, Udressy quotes John Paul II’s Evangelium vitae, which teaches that “Doctors and fathers of families have a duty to take recourse to alternative vaccines (if they exist), (cf. John Paul II, Evangelium vitae, n.74), putting pressure on the political authorities and health systems so that other vaccines without moral problems become available.”

“They should take recourse, if necessary, to the use of conscientious objection with regard to the use of vaccines produced by means of cell lines of aborted human foetal origin.”

Taking this teaching into consideration, Udressy lamented the position the Church has taken, saying, “What is even more frightening is the neglect of Life where Life should be defended! In such a dramatic situation, people would expect nothing but spiritual support: in such a crisis only Faith could allow them to accept the situation.”

“The situation has certainly been difficult to manage: there have been government threats, but in many places Church authorities played it by ear and it is these same ecclesiastical authorities who refused to bring supernatural help to those in need. The Vatican set this example!” he said.

Currently, all available COVID-19 vaccines used cell lines gathered from aborted fetuses in their development or testing processes. A fact that Pfizer whistleblower Melissa Strickler told Project Veritas and LifeSiteNews was hidden and minimized by executives at the drug company with the intention of making the shots more palpable to religious people.

Continuing, Udressy refers to the Vatican’s endorsement of vaccine coercion as “the greatest scandal” and states that the hierarchy “has come to suppress spiritual and sacramental support and to abandon people in need.”

In Udessey’s conclusion, he asserts, “What is certain is that, in all this, what we are experiencing has nothing human let alone Christian about it, and it is truly intolerable to see the holy Vatican City come to this point!”

“May St. Michael deign to always protect and defend the Holy City!”

Udressy is not alone in his opposition to the COVID-19 vaccines on Catholic grounds. High ranking clergymen such as Archbishop Carlo Maria Vigano and Bishop Athanasius Schneider have also expressed opposition to the abortion-tainted jabs.

“So we have to protest against this and start a new movement in pharmaceutics, in medicine, with no connection, not the remotest, to these crimes,” he pleaded.