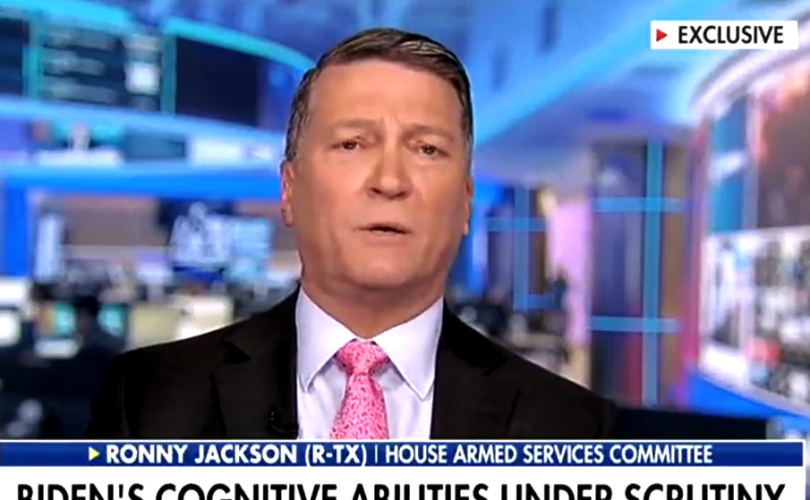 “The American people have continued to have questions about a lot of his bizarre behaviors,” he said. “This holding-hands thing is one of them, the way he makes up stories — and [how] he just repeatedly tells the stories that everyone has documented are not true. That happens pretty frequently. He has these emotional outbursts. He shuffles when he walks. He slurs his speech. He always looks frail and fragile.”

Jackson, who  said the future looks bleak for America should Biden continue to go unchecked.

“We’re headed down a bad path,” he said. “Something bad is gonna happen domestically here in this country with the potential terrorists crossing our border, or something bad is gonna happen overseas from a national security standpoint. We’re gonna get lots of Americans killed. And that’s when people will really want to dig in and see what’s going on. It’ll be too late then.”

“His cognitive decline is on full display, and it’s only getting worse,” his tweet read. “He needs to take a cognitive exam immediately or leave office. EVERYONE knows something’s wrong!”

Joe Biden’s behavior is getting more and more bizarre. His cognitive decline is on full display, and it’s only getting worse. He needs to take a cognitive exam immediately or leave office. EVERYONE knows something’s wrong! pic.twitter.com/KmEl4xbBM1

This is not the first time that Jackson has expressed his opinions on the President of the United States. In 2021, he said in an interview with Fox News that he thought Biden would resign due to his cognitive difficulties.

Now, in 2022, Jackson’s opinions have certainly not changed, as is clear in the concluding remarks he made in the Sunday interview: “We need to make sure he can do his job. And I honestly don’t think that he can.”