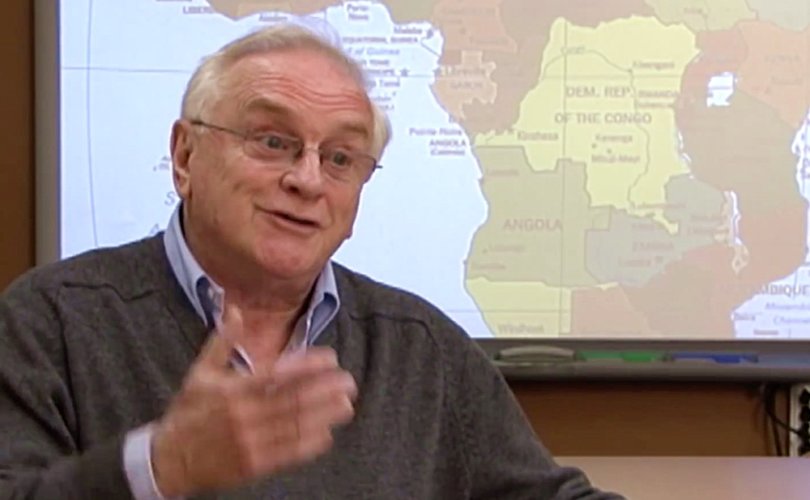 ST JOHN’S, Newfoundland, June 24, 2020 (LifeSiteNews) — Dr. Robert Walley, the founder of MaterCare International, a pro-life international organization of Catholic health professionals dedicated to the care of mothers and babies, died of cancer on June 22 at the age 81.

He leaves to mourn “with the most amazing memories, love and gratitude his beloved wife Susan,” three daughters, four sons and 15 grandchildren, reads his online obituary.

Walley also leaves a “great legacy of bringing thousands of children into the world as well as creating MaterCare International, which provides safe motherhood for women in developing countries.”

MaterCare International is a group of Catholic obstetricians and gynaecologists, midwives and general practitioners whose mission is “to improve the lives and health of mothers and babies, both born and unborn” and to reduce abortion worldwide and “maternal and perinatal mortality, morbidity in developing countries” through service, training, research, and advocacy, its website states.

It has projects in Nigeria, Ghana, East Timor, Sierra Leone, Uganda and Rwanda, and an ongoing project in Kenya, where it built and maintains a hospital for high-risk mothers.

“I was in the military for 30 years and worked with all kinds of people from across Canada and elsewhere, and I have never admired, honoured and respected anyone the way I do Dr. Walley,” says longtime MaterCare board member Theresa Winchester.

“And I’m sure now he’s in heaven advocating for unborn children.”

“CLC was honoured to have Dr. Walley speak as an expert panelist during our recent United Nations event on best practices in maternal healthcare, where he shared his tremendous experience and success stories, but also the tragedies that continue to occur,” Wojciechowski told LifeSiteNews.

Walley also “shared the fact that his decades long live-saving work was entirely dependent on generous donors and that he never received a cent from government grants, compared to the many other organizations who treat pregnancy as a disease and commit abortions in the developing world and receive millions in funding annually,” he added.

“But that didn’t deter him from his work. He continued to save lives, care for them and treat all people with dignity.”

Walley was “relentless” in his efforts to raise attention and funds to help mothers in Africa, and particularly to build “special hospitals” to treat obstetric fistula, even though he “ran into roadblock after roadblock,” echoed past president of Campaign Life Coalition Jim Hughes.

In one instance, Walley was “on the verge of getting a large endowment, and they said, ‘Of course you’ll provide birth control information as well,’ and he said, ‘What are you talking about? These women aren’t looking for birth control, their insides are blowing up’,” Hughes said.

“And they didn’t give him the money because of that.”

The only child of British Naval officer Leslie Walley and his wife Marjorie, Walley was born June 30, 1938, in Malta, where his father was then stationed. He became a Catholic at age 10 because of the influence of the Cabrini Sisters and De La Salle Fathers who ran the Catholic schools he attended.

Walley met his wife Susan, a nurse from Guernsey, when they worked together at a London hospital. When he decided to do part of his training in Canada because abortion had been legalized in England, he asked her to marry him and they spent their honeymoon on a boat crossing the Atlantic.

The Walleys moved to Canada permanently after a London teaching hospital gave him the choice to either do abortions, change his specialization, or leave the country. Soon after he arrived in Toronto, Walley, who earned a Masters of International Public Health from Harvard, was hired as a professor at Memorial University in St. John’s.

He helped start the Family Life Bureau of Newfoundland, worked with the Canadian bishops on life issues, and in 1985 Pope John Paul II appointed him to the Pontifical Council for Health, where he served for 15 years.

During this time, he organized MaterCare with like-minded pro-life colleagues who were battling the aggressive global abortion industry, and who first met in Rome in the 1990s, where Pope John Paul II urged them to put their pro-life convictions into action.

MaterCare succeeded “because the Lord wanted” it, and also because of the support of his wife, Susan, who is now in a long-term care home in St. John’s with dementia, Walley told LifeSiteNews in a recent interview.

“All of this … wouldn’t have been done without Susan. She was a superb nurse and she stayed at home and she looked after our seven kids.”

Counted among Walley’s many honours is a membership in the Order of the Knights of Malta, and a 2012 Pro Ecclesia et Pontifice medal, the highest award the pope can bestow upon laity and religious. He also received the Adam Exner Award for Catholic Excellence in Public Life from the Catholic Civil Rights League in 2017.

“Dr. Robert Walley was an inspirational leader and outstanding Catholic protagonist, especially in his remarkable work with mothers and other women in the underdeveloped world,” said Philip Horgan, currently on leave as president of the CCRL.

“He showed by his witness the incredible good that comes when talented folks bring their knowledge and skills to a need,” added Horgan. “He will be missed. May Eternal Light shine on him, and may Susan and his extended family be comforted.”

Winchester recalled that she first heard about MaterCare in 1997, when the Catholic Women’s League adopted a national resolution to support Walley’s organization.

“The cause really struck me because my mom had 14 children” but “never really had to worry whether she would die in childbirth,” she said. In contrast, for countless mothers in developing countries, “pregnancy is a possible death sentence.”

She met Walley in person four years later when he and his son Simon came to Ottawa to talk to Canadian International Development Agency (CIDA) officials about funding for MaterCare, and Winchester joined them as a newly appointed board member.

Although MaterCare received some CIDA funding initially, that did not last long, Winchester said. The CWL remains one of its major donors as MaterCare continues its vital work under medical director Dr. Bogdan Chazan of Poland and project manager Simon Walley.

She and Dr. Walley had a mutual admiration for Winston Churchill, “who found himself leading the free world in the fight against Nazism and fascism,” Winchester recalled.

One of Walley’s favorite expressions was “KBO,” which is what Churchill used to say in “the darkest times of the war.” It stands for “Keep Buggering On,” which is to say: “We really don’t know what we’re doing, but we’re going to keep doing it,” she said.

“And that was Rob’s motto, and anyone who knows Rob, knows KBO, so if you finish his obit with ‘KBO, Rob,’ a lot of people would know, okay, gotcha,” added Winchester.

A private funeral service for Dr. Robert Walley will be held at St. Pius X Church on Saturday, June 27, 2020. In lieu of flowers, donations can be made to MaterCare International.