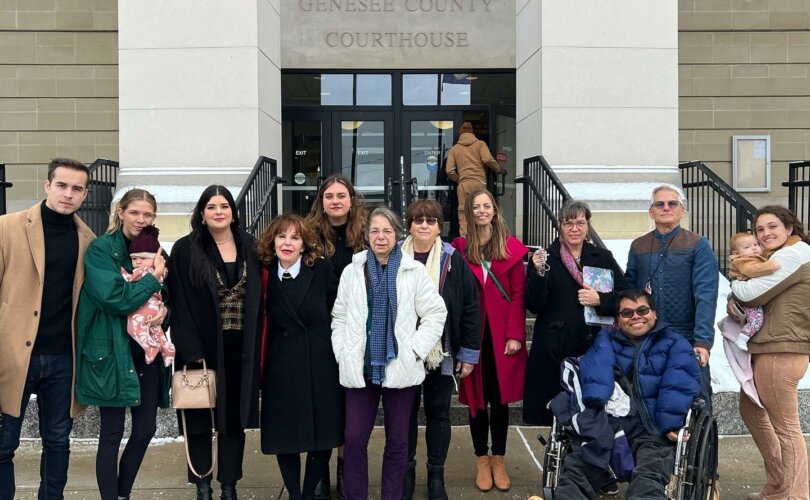 FLINT, Michigan (LifeSiteNews) — Four “Red Rose Rescuers” were sentenced to 45 days in jail this morning, three years after their arrest at an abortion clinic where they were defending the right to life of the unborn.

“BREAKING: Lauren Handy and 3 other defendants have been sentenced to 45 days in Flint jail for a Rescue in 2019. Thank you to everyone who came to the sentencing today. Solidarity with political prisoners everywhere and with the victims of the abortion genocide,” announced the Progressive Anti-Abortion Uprising (PAAU), of which Lauren Handy is the director of activism, on social media Friday.

The sentencing comes over three years after the initial June 7, 2019 event, in which pro-lifers Matthew Connolly, Will Goodman, Patrice Woodworth and Handy were arrested for sitting in the waiting room of the Women’s Center abortion clinic in Flint, Michigan, offering the women inside roses and providing them with alternatives to abortion.

All four were charged with trespassing, disturbing the peace and resisting arrest.

Explaining the saga, Citizens for a Pro-Life Society stated in a press release that the pro-life activists were “convicted of a misdemeanor trespassing and a felony charge of ‘obstruction of an officer’ due to simply practicing passive resistance upon their arrests.”

“All of the defendants were charged with obstructing a police officer, a felony, for going ‘limp’ during their arrest, a decision often made by nonviolent social justice activists who refuse to assist in their own unjust arrest,” the PAAU further explained in its own press release.

All four of the pro-lifers were “immediately taken into custody and will be held at the Genessee County Jail” in Flint, the release also noted.

The sentencing drew a somber reaction from those who know the pro-lifers, and the pro-life community more broadly.

“We are living in the midst of a genocide,” PAAU Founder and Executive Director Terrisa Bukovinac said in the release.“Rescuers across the nation must remain vigilant in our defense of preborn babies and we must not allow violent oppressors to shame or intimidate us out of stopping this injustice.”

The statement emphasized the importance of the rescues, saying that these pro-life activists “put a spotlight on the barbarity of poisoning and dismembering of our babies” as a “critical act of public education, as well as an indispensable part of making child-killing illegal.”

“PAAU activists and community members will protest outside the jail today at 1pm to demand the release of these brave and heroic Rescuers.”

For those unfamiliar, a Red Rose Rescue takes place inside an abortion clinic, wherein pro-life activists enter the facility in a final attempt to save unborn babies from abortion. Participants offer red roses to the pregnant women and encourage them to choose life by providing practical information and help.

Red Rose Rescuers, whose mission includes accepting consequences of standing up for the rights of the unborn, have repeatedly faced similar charges over the years for their efforts to save the unborn in the last moments before an abortion procedure.

In July, shortly after the historic Dobbs ruling, six pro-lifers were sentenced to jail for a rescue that took place in Alexandria, Virginia. Less than a month later, three other activists who participated in a New York rescue received a sentence of three months in prison.

Although many arrests have led to convictions and punishment, several charges have providentially been dropped against the pro-lifers. In September 2021, four rescuers in Michigan found their trespassing charges acquitted from a 2020 protest. The following February, aggravated trespassing charges were reduced to simple misdemeanor trespassing for two activists.

On Thursday, Red Rose Rescue posted on Facebook that four rescuers had criminal charges dropped in New Jersey. Fr. Fidelis Moscinski, Patrice Woodward, Matthew Connelly and Will Goodman had previously been charged for their pro-life efforts at a Planned Parenthood facility.

“At the time of this rescue, nearly 2 years ago, they had been unjustly arrested for attempting to assist others who were in immediate grave danger. Those unjust charges have now been justly thrown out,” the post reads. “Killing babies is unthinkable. May we continue the struggle to make this truth a living reality.”

Michigan, which previously secured pro-life laws to protect the unborn, passed an amendment to the state’s constitution on November 8 which enshrined the “right” to abortion up to the moment of birth, as well as securing the ability to sterilize and “transition” children without the knowledge or consent to their parents.