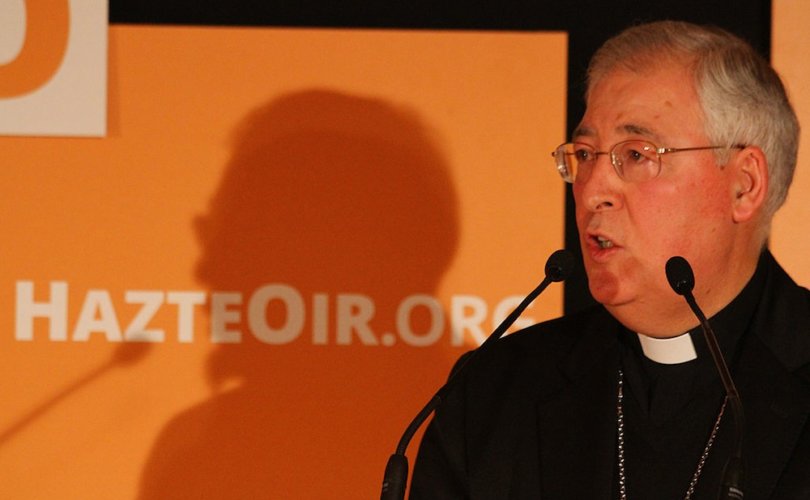 MADRID, Spain August 31, 2016 (LifeSiteNews) – Only weeks after a failed attempt to secure the prosecution of the Archbishop of Valencia for denouncing the gay political agenda, homosexual groups are calling for the prosecution of four other Spanish bishops for criticizing a new homosexual “protection” law recently passed by the Province of Madrid.

Three of the bishops are being threatened with a criminal complaint for having written and published a condemnation of Madrid’s new “Law of Integral Protection against LGTBIphobia and Discrimination for Reasons of Orientation and Sexual Identity,” which prohibits all “degrading” and “discriminatory” statements regarding homosexuals and transsexuals. The fourth bishop is being criminally investigated for expressing support for the statement of the first three.

The Madrid LGBTI “protection” law “seeks to prohibit the public teaching of the Bible” and to “prohibit, even, public prayer for those people who ask for prayer for a change of orientation in their lives,” according to the bishops of the dioceses of Alcalá de Henares and Getafe, Juan Antonio Reig Pla and Joaquín María López, as well as an auxiliary bishop of Getafe, José Rico Pavés.

The law constitutes “an attack against religious liberty and liberty of conscience,” an “attack and censure against the right of parents to educate their children in accordance with their own beliefs and convictions,” and “an attack against freedom of expression, freedom of teaching, the freedom of scientists and professionals in search of the truth, and the freedom of people to orient their lives or to ask for help, including religious help, for that which they need,” the bishops write.

The bishops are referring to provisions in the law prohibiting any speech that constitutes “degrading expressions” regarding homosexuals or transsexuals, and outlaws “acts that imply isolation, rejection, or public and notorious disrespect for people because of their sexual orientation and their gender identity or gender expression.” The law also prohibits any form of therapy, even for religious reasons, for those who suffer from same-sex attraction.

Those who violate the statutes of the law can be fined up to 45,000 Euros ($50,382 USD) and may be deprived of all government benefits for up to three years.

The statements have provoked an apoplectic frenzy of denunciation on the part of the homosexual lobby and their socialist political allies, who have called for the prosecution of the bishops.

The Spanish Observatory Against LGBTphobia has responded to what it calls the “infamous” declaration of the three bishops by denouncing it as “hateful speech, which continues to do such damage to our society, inciting discrimination, injustice, and even violence,” according to the Spanish newspaper El Español.

The newspaper reports that the Observatory has “made known” the declaration of the bishops to the Special Prosecutor for Hate Crimes, and “they explain that at this moment they are determining if they are going to make a criminal complaint against the bishops.” It quotes the Observatory as calling on prosecutors and judges in the province of Madrid to “make a pronouncement regarding the incitation to disobedience to the law that the bishops have proclaimed.”

In addition, Europa Press is reporting that Spain’s attorney general has begun a criminal investigation against Bishop Demetrio Fernández for his comments supportive of the bishops’ declaration, as well as others he has made in the past that indicate disagreement with the homosexual political agenda and the use of in vitro fertilization, which is used by many homosexuals to create offspring in surrogate mothers.

The newspaper reports that charges were filed against the bishop by an unnamed individual one day after it reported that a socialist political party, “Ganemos” (Let’s Win), was planning to make a complaint. The bishop is also the target of a Change.org petition led by a deputy of the Spanish Socialist Worker’s Party, Antonio Hurtado, asking the attorney general to prosecute Fernández.

According to Ganemos, Fernández is guilty of opposing “human rights, coexistence, and democratic values” because of his support for the bishops’ declaration. Hurtado says Fernández’s words “foment homophobia and incite hate crimes.”

The complaints and investigations are only the latest in a series of charges made against Spanish bishops in recent years for their opposition to the gay agenda as well as their support for the traditional family and the right to life, always by the homosexual lobby and socialist political parties.

Bishop Reig Pla in particular has been the subject of at least two prosecutions. Thus far, all attempts to prosecute the bishops have ended in failure, either because prosecutors choose not to take the cases to trial or because judges rule in favor of the freedom of speech and religion of the bishops.

Reig Pla, María López, and Rico Pavéz published a critique of an earlier version of the law in March of this year. A translation by LifeSiteNews can be found here.