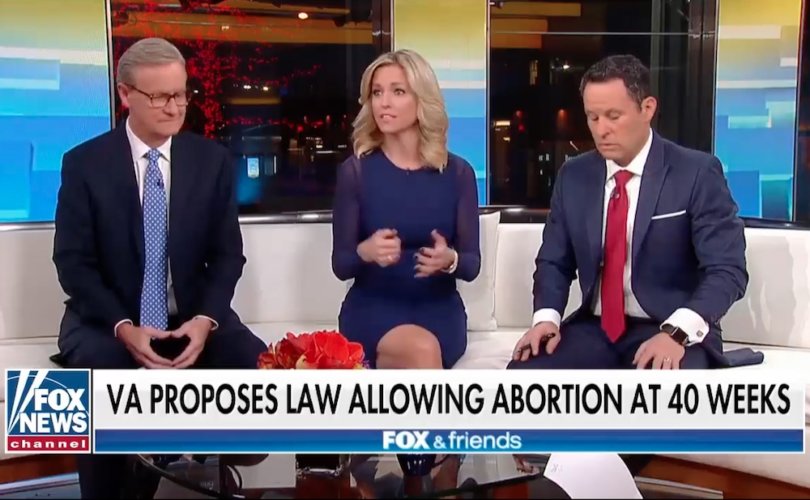 RICHMOND, Virginia, January 30, 2019 (LifeSiteNews) – Fox News Channel morning host Ainsley Earhardt is among those who have spoken out against a radical new abortion bill introduced in Virginia, powerfully contrasting the proposal’s lack of limits with her own experience as a mother and other women in her life.

Video has gone viral from a subcommittee hearing in which Democrat Del. Kathy Tran takes questions about her bill to repeal the state’s ban on late-term abortions, ultrasound requirement, and a variety of other regulations on late-term abortion. Republican Del. Todd Gilbert asks her “how late in the third trimester could a physician perform an abortion” and whether that includes when the mother “has physical signs that she is about to give birth.”

“I don't think we have a limit in the bill (…) my bill would allow that, yes,” Tran answers.

The “Fox and Friends” crew discussed the story on Wednesday morning, sharing the disbelief scores of pro-lifers and even some social moderates have expressed online.

After co-hosts Steve Doocy and Brian Kilmeade expressed shock that “it is a baby” Tran was talking about, Earhardt delivered an emotional monologue about motherhood and the tragedy of Tran’s proposal. Earhardt is the mother of a three-year-old daughter.

“When I was reading articles about it this morning, they had pictures of babies just being born. And if you’ve ever had a baby, my gosh, it’s the best experience of your life,” she said, voice quivering with emotion. “When they hand you that child, it changes your life in a major way. And, you know, this is beyond … it’s so hard for me to wrap my head around.

“Listen, I know women have complications, I lost a friend, she was diagnosed with cancer, she got pregnant, she ended up losing the baby and then she ended up losing her life. I know that there are certain circumstances,” she continued. “But it’s the best day of your life when you hold that child, and there are so many women out there that want children, and you know, I have so many people in my life that weren’t able to have kids.

“Girls from my Bible study, people down south that I’m friends with, who want babies so badly,” Earhardt said. “So there’s so many women out there that would love to take these children, and so it’s a hard topic, because the day that they put Hayden in my arms, it was the best day other than my salvation, the day I got saved, it was the best day of my life.”

Virginia’s Democrat Gov. Ralph Northam also addressed the controversy, suggesting in a radio interview that mothers could even choose to let born infants die under the bill.

“If a mother is in labor … the infant would be delivered. The infant would be kept comfortable,” he told WTOP’s Julie Carey. “The infant would be resuscitated if that’s what the mother and the family desired, and then a discussion would ensue between the physicians and mother.” He later issued a statement claiming he was only referring to babies that were either non-viable or suffered from severe fetal abnormalities.

Tran's bill has been tabled for the time being.