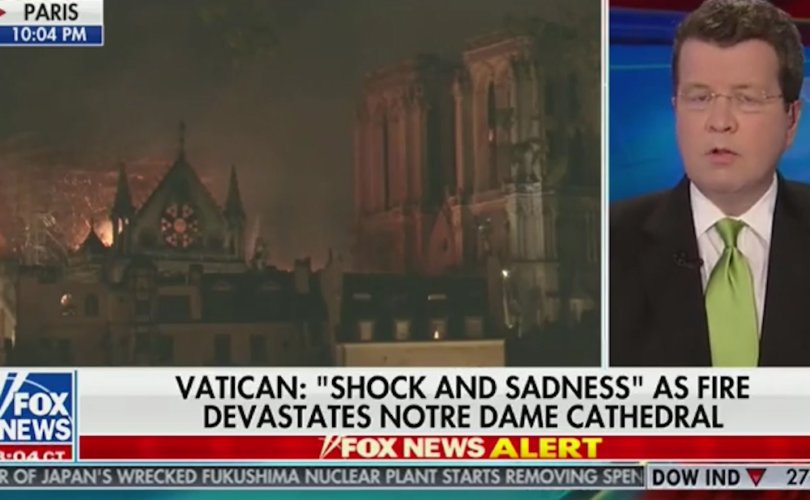 April 17, 2019 (LifeSiteNews) — Two Fox News anchors quashed mention of the ongoing wave of attacks on Christian churches in France on their shows Monday while conducting interviews on the Notre Dame Cathedral fire.

With the church burning in Paris and the cause still unconfirmed, Shepard Smith shut down a French media analyst and Neil Cavuto cut off the president of the Catholic League for Religious and Civil Rights after the guests mentioned the church attacks in expressing suspicion that the Notre Dame fire may have been intentional.

Putting the kibosh on guests venturing into speculation on the cause of the Notre Dame fire closely follows another of the network’s hosts stepping into controversy related to religious issues on the air.

On Monday as Notre Dame was burning, Smith was interviewing Philippe Karsenty, a French media analyst of Jewish descent and sometimes politician who was found guilty in 2013 of defamation for accusations that public national television channel France 2 staged footage of a 2000 killing of a 12-year-old Palestinian boy. The case was controversial, owing to the Israeli-Palestinian conflict and the television being state-owned.

Karsenty told Smith that everyone in France was in shock and the Notre Dame fire amounted to a French 9/11, albeit without casualties.

“And it's a big shock,” Karsenty said. “This church was there for more than 850 years. Even the Nazis didn’t dare to destroy it.”

“And you need to know that for the last year we’ve had churches desecrated each and every week in France, all over France,” Karsenty said. “So of course you will hear the story, the politically correct, political correctness, which will tell you that it’s probably an accident.”

Smith then broke in.

“Sir, we’re not going to speculate here of the cause of something which we don’t know,” he said, speaking over his guest. “If you have observations or you know something, we would love to hear it.“

“No, I’m just telling you something, what we need to be ready- ”

“No sir,” Smith interrupted, “we’re not doing that here, not now, not on my watch.”

With Cavuto and the Catholic League’s Bill Donohue’s exchange on the cathedral fire in progress, Donohue told the Fox anchor that if the Notre Dame fire is an accident, it’s a monumental tragedy.

“But forgive me for being suspicious,” Donohue added before being cut off by Cavuto. “Just last month, a 17th-century church was set on fire in Paris. We’ve seen tabernacles knocked down, crosses have been torn down, statues have been smashed.”

“Bill we don’t know that,” Cavuto broke in. “So if we can, avoid what your suspicions might be. I do want to look at what happens now,” then asking Donohue about finances and the Catholic Church’s plan to restore the cathedral.

Donohue replied that authorities would first have to get to the bottom of the fire and said there was no question as to whether the Church would rebuild Notre Dame.

“But I’m sorry,” Donohue said before being interrupted again by Cavuto. “When I find out that the Eucharist is being destroyed and excrement is being smeared on crosses, this is going on now … ”

“Wait a minute, Bill,” Cavuto interjected, immediately moving to end the conversation. “I love you, Bill, but we cannot make conjectures about this. So, thank you.”

After Donohue was hung up on, Cavuto told viewers the network was not trying to be rude to guests, but there was much unknown about what happened with the fire.

The Notre Dame fire broke out late in the day on Monday of Holy Week, burning for some 15 hours and prompting worldwide shock and devastation.

The 850-year-old Notre Dame de Paris is the most famous of the Gothic cathedrals from the Middle Ages and is known for its size, history, art and architecture.

Home to many priceless relics of the Church, Notre Dame is regarded as a symbol of French history and the heart of Catholic France, and is known the “eldest daughter of the Church.”

Catholics were seen singing hymns and praying as they knelt in the street as the church burned on Monday.

France has seen a rash of attacks against Catholic churches since the beginning of the year, including arson and desecration.

Perpetrators have shattered statues, knocked over tabernacles, scattered or destroyed the Eucharist, and they’ve torn down crosses or smeared them with human excrement.

The Church of St. Sulpice in Paris, built in the 17th century, was set on fire in March – a month that saw 12 churches desecrated in one week.

The attacks have generated fear that anti-Catholic sentiment is on the rise in the country.

Eighty percent of the church desecrations in France targets Christian sites, Breitbart’s Thomas Williams reported, equating in 2018 to an average of two Christian churches violated per day per day in France — though these incidents seldom make it into news reports.

While the cause of the Notre Dame fire has still not been determined, authorities told the media as it was still blazing that it was being treated as accidental, citing cathedral renovations that were underway.

Fox News suspended Pirro after in March after Pirro questioned whether Omar’s adherence to Islamic doctrine, evidenced by Omar’s wearing a hijab, meant she also adhered to Sharia law, with Pirro stating, “which in itself is antithetical to the United States Constitution.”

Pirro returned to the air on April 1.