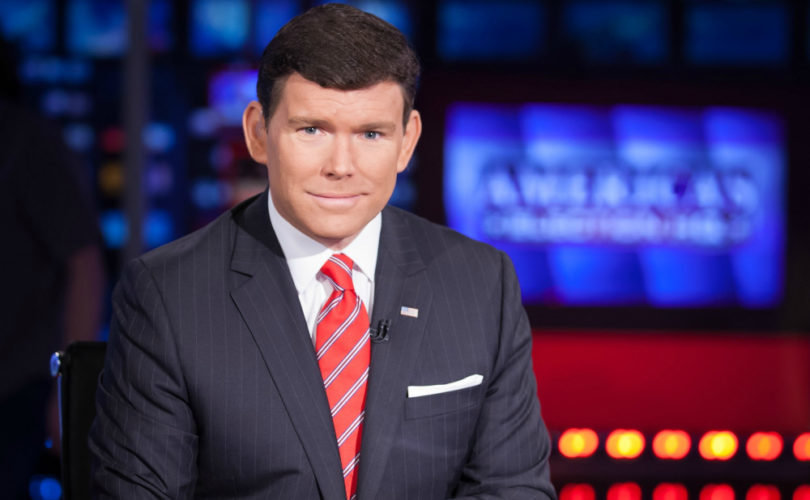 ORLANDO, FL, January 26, 2015 (LifeSiteNews.com) — Fox News political anchor Bret Baier says he pulled out of his speech at this week’s Legatus Summit, a gathering of Catholic business leaders, on the request of the channel’s leadership.

However, in an email from Baier published by Americans for Truth About Homosexuality, the mass-attending Catholic also criticized Legatus’ treatment of homosexuality in its materials.

“I am a lifelong mass attending Catholic – I’m a lector at my parish. I consider myself to be in line with my Church on most things,” Baier wrote. “This isn’t about me.”

“But, describing homosexuality as a ‘disorder’ and talking about ways to ‘cure’ people from it – does not seem to line up with the loving, accepting Church that I know,” Baier said. “Nor does it match up with how Pope Francis has talked about the issue recently.”

The Catechism of the Catholic Church describes homosexual acts as acts of “grave depravity,” and the homosexual inclination as “intrinsically disordered,” while also urging that those with same-sex attraction “be accepted with respect, compassion, and sensitivity.”

Baier was among three high-profile speakers to cancel on the event after the homosexual activist group “Good As You” campaigned against Legatus, calling it a “very anti-gay organization of Catholics.” The other two were actor Gary Sinise and Molson Coors Board Chairman Peter Coors.

This is the second year in a row that a scheduled Legatus speaker has bowed to pressure from homosexual activists upset by its maintenance of Church teaching. Last year actor Bob Newhart canceled his speaking engagement with the Legatus summit for the same reason.

All four men who have canceled on Legatus, Newhart, Baier, Sinise and Coors, identify as Catholic. Coors is a member of Legatus.

Legatus Executive Director John Hunt said in a January 15 statement the organization has great respect for Baier, Sinise and Coors and regrets that its members will not have the opportunity to hear about all the good work they are doing.

The Catholic organization for business leaders and their spouses exists to integrate faith, family and business in its members’ lives, and upholds Church teaching as part of its mission.

“Legatus embraces all that the Catholic Church teaches – nothing more, nothing less,” Hunt said in the organization’s statement.

“Church teachings on same-sex attractions are not intended to marginalize the individuals who experience them,” he continued. “On the contrary, the Church wants to reach out to these individuals — as well as all who will enter into dialogue about its teachings — and help them to understand why the Church teaches what it does.”

“LGBT groups should not feel threatened by our organization, whose mission is to study, live and spread our faith according to the teachings of the Catholic Church,” he added. “At its core, this issue is about the freedom of Legatus members — in fact all Catholics, and by extension people of any religion — to have the freedom to exercise their religious beliefs, which includes the ability to gather together and discuss their faith.”

The Catholic Church regards all people as children of God with human dignity regardless of their sexual desires. The Church also teaches however, that the sexual act is reserved for marriage, which is by definition the union of one man and one woman.

The pro-homosexual group GLAAD gloated over the successful attack on the Catholic group. GLAAD was also part of last year’s LGBT pressure on Newhart to withdraw.

“The conservative Catholic organization (and magazine) Legatus is finding that its extreme and alienating anti-LGBT rhetoric is harming its reputation and ability to retain mainstream speakers,” GLAAD said on its website. “Sinise, Baier, and Coors are all conservative, but once made aware of the extreme views of the organization, decided that they didn't want their mainstream credibility harmed by association with the organization. You can see the distancing in each of their statements.”

Faith-based commentators and media analysts reacted disapprovingly of the men’s decision to cancel on Legatus, and the homosexual pressure responsible.

Columnist Jennifer Roback Morse wrote in the National Catholic Register about the threat the homosexual movement feels from Legatus Summit speaker Paul Darrow. Darrow, who experiences same-sex attraction and lived the homosexual lifestyle for years, has converted to Catholicism and chosen a chaste lifestyle with the help of the Catholic group Courage, much-maligned by homosexuals.

“You might think this is just another episode of the gay lobby intimidating people they don’t like,” she said. “What’s at stake here is whether ordinary people are allowed to have their own version of their own life stories.”

“The Gay Lobby needs for you to think that no change is possible for any person who experiences same-sex attraction,” Morse said.

Cliff Kincaid, director of the Accuracy in Media Center for Investigative Journalism, decried the implications for unbiased news with the silencing of Baier.

“Even while our media pay lip service to freedom of expression in France, the pressure to conform to the left-wing homosexual agenda continues in the U.S. and has now scored a direct hit on the Fox News Channel,” he wrote in a column. “Fox News personality Bret Baier has been forced to pull out of a Catholic Christian conference because of homosexual pressure.”

“Once again, for all the world to see, we have a stark example of how the freedom to object to the homosexual agenda is being denied to those in the news business,” Kincaid said.

Peter LaBarbera chronicled specifics around the men canceling on Legatus along with reasons homosexual activists have targeted Legatus in his column for Americans for Truth About Homosexuality.

He defined “crying ‘anti-gay’” as a politically correct intimidation tactic.

LaBarbera was among those who had speculated that it was Baier’s superiors at Fox News who pressured Baier to cancel, saying, “Fox News threw Catholic group Legatus under the bus.”

LaBarbera called Sinise out as well, saying he needed a reminder of what liberty is about.

“If we as Americans have freedom of speech and religion, what good are they if we censor ourselves out of a fear of being criticized by the Left or by secularists?” he asked.

Ruse criticized Sinise too in his column for Crisis Magazine, published prior to his invitation to speak at the summit.

“Sinise says he does not want what amounts to Catholic teaching to disrupt his unifying mission,” Ruse wrote. “But he has certainly taken sides hasn’t he?”

Ruse identified the movement among homosexuals to effectively silence those not in support of their lifestyle.

“There exists a highly organized cadre of LGBT activists whose job it is to monitor the American people for any deviance from what is approved thought and speech,” Ruse said. “But more than monitor, their job is rather like advanced scouts so that other LGBTs may then move in to target and punish. Their influence is pernicious, wicked and frankly un-American.”

Bryan Fischer, host of the Christian radio program Focal Point, responded to the Legatus cancellation January 13 on his Facebook page.

“Fox News has surrendered on the gay agenda,” Fischer said. “Bret Baier cancels his appearance before a Christian group whose crime is believing that there is hope for the homosexual.”

Writing at RenewAmerica, Fischer said that by pulling out of the event, Baier has clearly chosen sides in the culture war.

“Bottom line: it is impossible to remain neutral in the culture war on the issue of homosexuality,” he said. “You are either with God on the matter or you are not.”

Catholic blogger Kathy Schiffer wrote that “LGBT bullies” had driven the speakers away.

“I have a message for the Gay Lobby,” Schiffer said. “That group of militant sexual deviants who seek to silence religious speech here in the United States of America: Legatus is Catholic.”