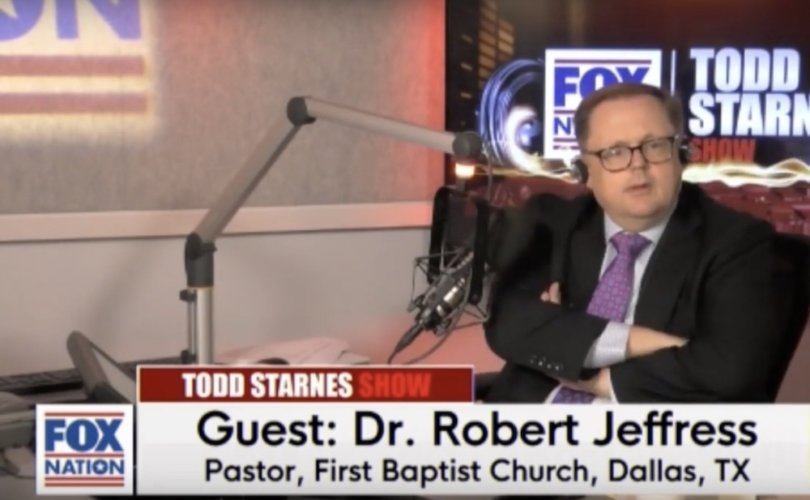 October 3, 2019 (LifeSiteNews) — Popular conservative radio host Todd Starnes has parted ways with Fox News Channel, days after an interview in which a guest suggested that Democrats worship a pagan god of child sacrifice.

On Monday, Starnes interviewed First Baptist Church’s Pastor Robert Jeffress who, amid a discussion of Democrats’ support for abortion, suggested that the “god they worship is the pagan god of the Old Testament, Moloch, who allowed for child sacrifice. The God of the Bible doesn’t sanction the killing of millions and millions of children in the womb. I think the god they are worshiping is the god of their own imagination.”

“We just assume they’re praying to God,” Starnes himself said earlier in the exchange. “I’m not quite sure.”

Most federally elected Democrats, including most of the 2020 presidential field, overwhelmingly oppose any restrictions on abortion, even legislation to mandate life-saving care for newborns who survive failed abortions.

On Wednesday, The Wrap reported that Fox News has dropped Starnes as a contributor to TV segments, website commentary, and Fox Nation subscription content. Fox didn’t elaborate on a reason for the decision, but a source told The Wrap that it “was in the works well before Monday.”

Starnes himself wrote a Facebook post Wednesday saying simply that he has “departed Fox News” after “15 amazing years” and is “excited to announce the launch of Starnes Media Group, a multi-faceted broadcasting and digital company focused on delivering authentic conservative news and commentary.” LifeSiteNews has reached out to Starnes for comment.

He also tweeted Wednesday that he is a “rock-solid conservative and I do not compromise my beliefs. Period”:

I'm proud to call myself a gun-toting, Bible-clinging, Deplorable Trump supporter. I am a rock-solid conservative and I do not compromise my beliefs. Period. https://t.co/ka0x0pZuis

While it’s not yet known if the departure was a mutual decision rooted in Starnes’s career plans or if he was forced out over his forceful conservative commentary, speculation is buzzing about the latter in light of reports that former House speaker Paul Ryan, now a board member at Fox, feels “embarrassed” about Donald Trump and is lobbying the network to “decisively break” with the president.