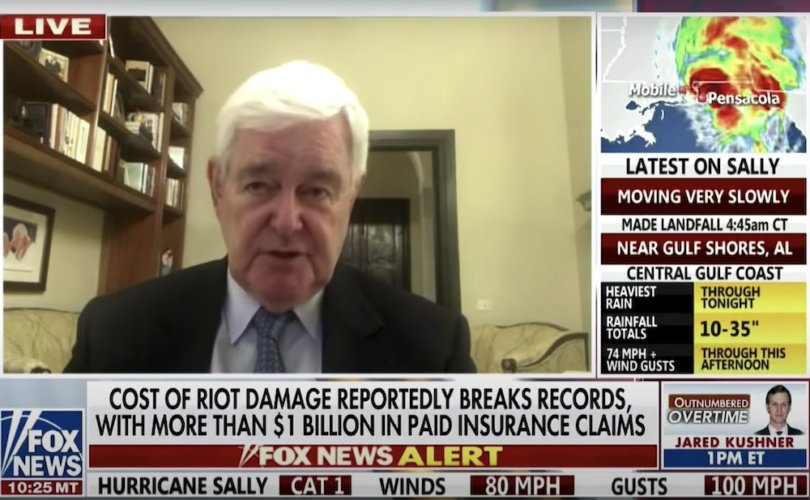 September 17, 2020 (LifeSiteNews) – An unusual moment between former Republican Speaker of the House Newt Gingrich and Fox News Outnumbered co-host Melissa Francis this week has conservatives wondering whether parts of Fox News channel have imposed a moratorium on discussing the activities of far-left financier George Soros.

“The number one problem in almost all these cities (where Black Lives Matter protests have turned violent) is George Soros-elected, left-wing, anti-police, pro-criminal district attorneys who refuse to keep people locked up,” Gingrich said. “Just yesterday they put somebody back on the street who’s wanted for two different murders in New York City.”

“You cannot solve this problem, and both (Kamala) Harris and (Joe) Biden have talked very proudly about what they call progressive district attorneys,” Gingrich continued. “Progressive district attorneys are anti-police, pro-criminal, and overwhelmingly elected with George Soros' money. And they’re a major cause of the violence we are seeing because they keep putting the violent criminals back on the street.”

“I'm not sure we need to bring George Soros into this,” Francis responded.

“He paid for it,” Gingrich replied after a surprised pause. “Why can’t we discuss the fact that millions of dollars he spent?”

“No, he didn't,” interrupted Democrat strategist Marie Harf. “I agree with Melissa, George Soros doesn't need to be part of this conversation.”

“OK? So it's verboten?” Gingrich asked. After several seconds of awkward silence, co-host Harris Faulkner moved on to another segment without answering.

On Thursday, Faulkner apologized for the incident.

“While I was leading that segment, we had interruptions, and I sat silently while all of that played out,” Faulkner said. “Also not ideal. Our guest, former House Speaker Newt Gingrich, who is beloved and needed to be allowed to speak with the openness and respect that the show is all about, was interrupted.

Do we debate with fire here? Yes. But we must also give each other the space to express ourselves,” she continued. “We don't censor on this show.”

“We had interruptions, and I sat silently while all of that played out. Not ideal! Gingrich is beloved and needed to be allowed to speak… we don't censor on this show.” pic.twitter.com/HyU7898RyB

Despite Francis’ objection and Daily Beast contributing editor Justin Baragona’s framing, Fox News itself reported on the facts Gingrich brought up as recently as July 30.

“District attorneys and current candidates whose campaigns benefited from the work of left-wing organizations – including ones backed by liberal billionaire George Soros – are now pushing for new practices that could see sharp reductions in prosecutions and incarcerations,” Fox reported at the time.

US Attorney General William Barr also addresseed this almost a year ago in a Fox interview:

AG Barr calls out how Soros is subverting our legal system and leading to more crime and violence pic.twitter.com/fAdCQY6BEi

“There’s been this recent development where George Soros has been coming in, largely in Democratic primaries where there’s not gonna be much voter turnout, and putting in a lot of money to elect people who are not very supportive of law enforcement, and don’t view the office as bringing to trial and prosecuting criminals, but pursuing other social agendas,” Barr said at the time. “And they have started to win in a number of cities, and they have, in my view, not given the proper support to the police, and they’re following policies that are ultimately gonna lead to an increase in violent crime and more victims.”

While Fox News is far more conservative than CNN or MSNBC, especially with its primetime lineup of pundits spearheaded by Tucker Carlson, many have long complained about left-wing bias in its news division. Last year, it was reported that former GOP House Speaker Paul Ryan, a member of the board of Fox Corporation, was pushing for the channel to “decisively break” with President Donald Trump.