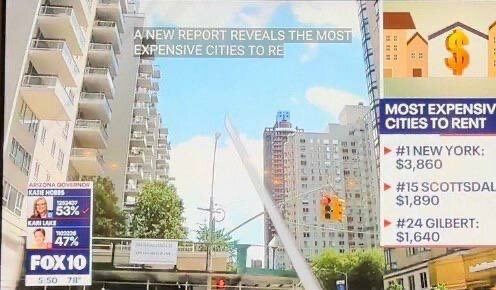 A screenshot of Thursday evening Fox10 air footage shared by Charlie Kirk to Twitter shows a small graphic in the lower left corner of the TV screen displaying election “results,” with a red checkmark next to Hobbs’ vote “tally,” thus “declaring her the winner 53-47 over Kari Lake,” Kirk noted.

Fox10 Phoenix subsequently issued a statement in an effort to explain the blunder, tweeting, “At 5:50pm during the Fox 10 newscast today a small graphic appeared on the lower left side of the screen showing test results for the upcoming election. These were generated by the Associated Press which distributes results to clients.”

“This graphic was never meant to go on air — the numbers were only part of a test. The station has taken steps to make sure this cannot happen again,” continued Fox 10 Phoenix, a station where Lake formerly worked as television anchor.

Commentators have observed that the incident undermines trust in the integrity of U.S. elections, as it has given the impression to many that election results have been fraudulently “fixed” beforehand.

Arizona state Rep. Jake Hoffman issued a statement that went so far as to call the error as a “threat to our Republic,” and announced he would introduce a bill to hold Arizona news outlets “accountable” if they “interfere with Arizona’s election.”

“While I understand the need for internal planning by news stations, errors like this that are broadcast live to the public pose a legitimate threat to our Republic and serve only to undermine the confidence that Arizonans have in the integrity of their vote,” Hoffman wrote.

“What if this had happened on election night or the day before the election? The impact to our democratic process would be devastating,” he continued. He went on to share that in the “coming legislative session” he would introduce a bill to issue consequences should Arizona news outlets either “interfere” with a state election “and/or disenfranchise Arizona voters like this in the future.”

Conservative author and filmmaker Dinesh D’Souza similarly declared “AP and Fox 10” as both “guilty” of “undermining public trust in elections.”

Lake, who was endorsed by former President Donald Trump in her primary run, has galvanized both ends of the political spectrum due in part to her bold claim that the 2020 election was “stolen” from Trump, and her opposition to the mainstream COVID-19 narrative and conventions.

Claims of 2020 election fraud circulated among many conservatives due to a variety of ballot and voting machine irregularities witnessed and testified to by poll watchers, data analysts, and others.

A forensic audit of election results from Arizona’s Maricopa County revealed what Family Research Council’s Matt Carpenter has called some “startling discrepancies,” including the revelation that some 74,000 mail-in ballots were counted in the state’s largest county, with no record of them having been sent to voters in the first place.

Prosecution for election fraud by Democrats in Arizona has since followed. Earlier in October, a judge sentenced former Democrat mayor Guillermina Fuentes to 30 days in prison for ballot harvesting during the August 2020 primary election.

Kari Lake has been recently endorsed by former U.S. Congresswoman Tulsi Gabbard, who recently defected from the Democrat Party, as unafraid to “call out the warmongering elitist cabal of permanent Washington and the Military Industrial Complex, and their propagandists in the mainstream media.”