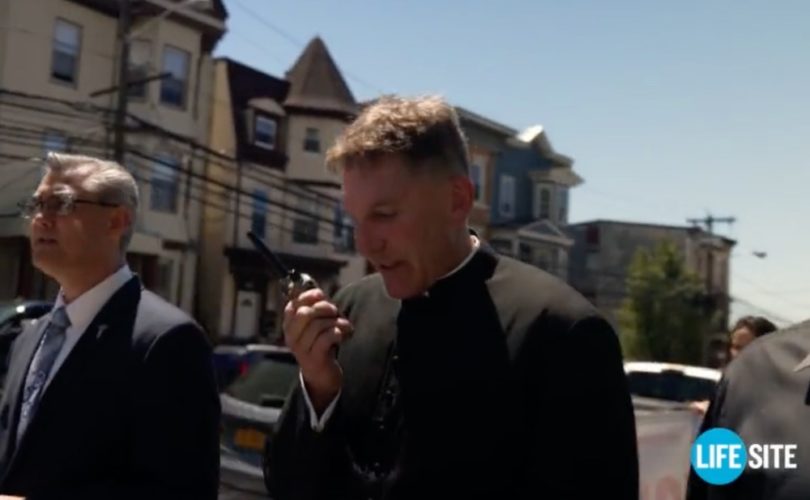 NEWARK, New Jersey, June 22, 2021 (LifeSiteNews) – Father James Altman rallied New Jersey Catholics last week in a prayerful and peaceful protest against Seton Hall University’s radio station WSOU. On June 16, a large gathering of men, women, and children gathered in front of Sacred Heart Basilica Cathedral in Newark to call on Cardinal Joseph Tobin to shut down the station, which has been airing satanic music for over 34 years.

The event was sponsored by the Lepanto Institute and organized by the grassroots organization Shut Down WSOU. The rally began with speeches from John Yep of CatholicVote, Michael Hichborn of the Lepanto Institute, Jesse Romero of Virgin Most Powerful Radio, Brother Mauricio Torres, and Altman.

Some of the attendees of the rally held a sign reading “End McCarrick 2.0.” Disgraced ex-Cardinal Theodore McCarrick, former archbishop of Newark, was involved in the beginnings of the radio station. Just a month after his appointment as head of the Newark archdiocese, and in turn having jurisdiction over the archdiocesan Seton Hall University, WSOU changed its format to a heavy metal one, which regularly includes satanic songs.

Hichborn, who has extensively investigated the station, mentioned in his speech and to LifeSite that Cardinal McCarrick brought “homosexual predation and the occult” to the Archdiocese of Newark. Hichborn said that the first song he ever heard from WSOU “described the brutal murder of a woman with a sledgehammer.” He questioned how music such as this could ever be “reflective of the mission or purpose of the Catholic Church.”

Shut Down WSOU has directly recorded and listed online evidence of songs broadcasted at the Catholic university, especially after the station’s website took down its playlist. Some of the recordings can be heard and seen here. (Warning: graphic imagery and explicitly blasphemous and violent content.)

Romero called on Tobin to “protect your sheep; use your crosier to beat the wolves off. We are asking you to be faithful to your apostolic calling.” As a former police officer from Los Angeles, Romero saw firsthand many instances of occultist activity. He told LifeSite that “this is what we are dealing here on a massive scale in our country. We are dealing with diabolical disorientation…and the occult like we have never seen it before, as you can see by playing satanic music at a Catholic college.”

Richard Smaglick, head of Shut Down WSOU, told LifeSite that with Catholics “standing united in fidelity to Christ’s teaching, we’re now seeing the emergence of a movement to restore the Church.”

Altman did not mince words during his speech.

“Cardinal Joseph Tobin: God damns your failure to defend the deposit of faith,” he said regarding the left-wing cardinal’s silence and inaction on WSOU.

“We’re gathering. We are uniting as one clan, and we will not put up with this nonsense anymore,” Altman told LifeSiteNews. “Tyrants, you’re about to meet your match. We’re done and through the power of Almighty God we will clean the house, because it is in desperate need of cleaning.”

After the speeches concluded, Altman led the Catholic faithful in a rosary procession around the Newark cathedral, ending outside of Tobin’s residence.

“As leaders of our Church continue to stray further from fidelity to Christ, as Catholic universities have eroded to the point of facilitating the abandonment of the faith, many among the laity are now daring to lead, as Father Altman says, and leading into truth, as found only in the deposit of faith,” said Smaglick.

He told LifeSiteNews that his group will “continue to increase pressure on Cardinal Tobin,” as head of the Board of Regents and Board of Trustees of Seton Hall University, until the radio station is shut down.