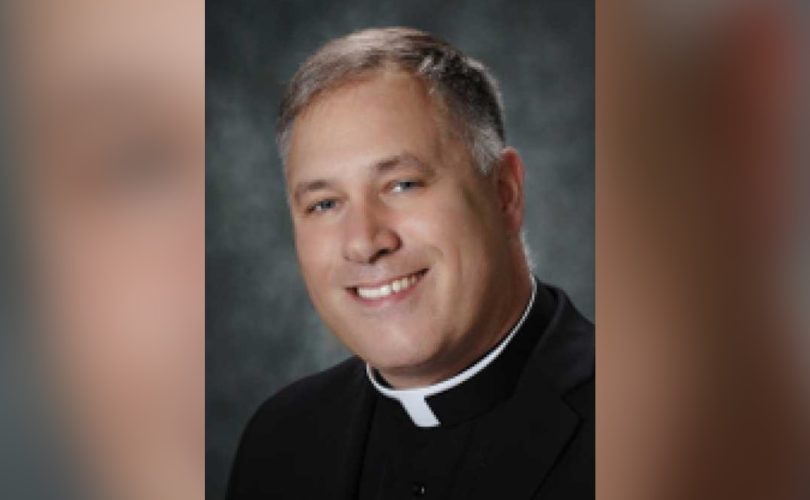 An investigative report from Catholic news website The Pillar published in July last year alleged that Burrill, then the highest ranking non-bishop clergyman in the country, had been engaging in near daily usage of the homosexual dating app Grindr, a service used by men seeking “sex” with other men.

Data acquired by The Pillar showed at the time that Burrill had “visited gay bars and private residences while using a location-based hookup app in numerous cities from 2018 to 2020, even while traveling on assignment for the U.S. bishops’ conference.”

Despite Burrill’s record of homosexual behavior, La Crosse Bishop William Callahan appointed “Msgr. Grindr” as administrator of the parish of St. Teresa of Kolkata in West Salem, Wisconsin, on Saturday.

In a June 11 statement, Callahan announced that Burrill would begin service as administrator of the St. Teresa of Kolkata parish the same day and asked for “prayers of support” for Burrill and his new parishioners as he picks up his new appointment.

Callahan continued, noting Burrill’s resignation from active ministry and subsequent “extended leave” before being called to administrate the diocesan parish. “Monsignor Burrill engaged in a sincere and prayerful effort to strengthen his priestly vows and has favorably responded to every request made by me and by the Diocese,” Callahan wrote.

In comments appearing to diminish the cleric’s extreme moral failings, Callahan stated “unequivocally that the Diocese of La Crosse has received no allegations of illegal misconduct of any kind by Monsignor Burrill,” stressing his “ability to accompany the people of God of this great parish as together you journey toward a deeper, more meaningful relationship with the Person of Jesus Christ.”

A statement from the La Crosse Director of Communications and Public Relations to LifeSiteNews last year explained that the diocese had pledged its “full cooperation with the Conference of Catholic Bishops to pursue all appropriate steps in investigating and addressing the situation.”

On July 20, 2021, Callahan announced that the investigative report into Burrill’s Grindr use “established no facts” about the monsignor’s behavior.

“The media reports establish no facts in truth about Jeff’s behavior either innocent or not,” Callahan wrote.

“Nevertheless, we have learned throughout the years of dealing with cases of moral crisis, to pursue and investigate all misconduct allegations and promote the causes of justice and morality for all.”

“I am prayerful and eager to hear the truth in all of this, as I am sure we all are,” Callahan stated.

No details of the diocesan investigation have yet been publicly released.

LifeSiteNews reached out to the Diocese of La Crosse for comment but did not receive any reply before publication.

Although confidently throwing his support behind Burrill, Callahan still has strict sanctions placed on Father James Altman following his outspoken stance against abortion and declaration that the Democrat Party’s pro-abortion platform means that “you cannot be Catholic and be a Democrat.”

As things stand, Altman has been removed as pastor of St. James the Less parish and his priestly faculties have been removed.

Catholic research organization The Lepanto Institute accused Callahan of holding a double standard regarding the parochial appointments of clergy within his diocese, noting that Altman “was stripped of his parish without just cause” while Callahan reassigned “disgraced Msgr. Burrill to a parish.”

While Fr. Altman was stripped of his parish without just cause and the bishop that removed him assigned disgraced Msgr. Burrill to a parish.

So, if you troll grinder for gay lovers, you can have a parish. But if you address the scandals in the Church, you will be removed. pic.twitter.com/LvgsjCbzKj

“So, if you troll grinder for gay lovers, you can have a parish. But if you address the scandals in the Church, you will be removed,” the organization stated.

In like manner, British Catholic author Deacon Nick Donnelly lamented Burrill’s parish assignment as Altman remains under censure, commenting that the “[m]essage is loud and clear. You’re expelled if you defend the faith and welcomed if you engage in sodomy.”