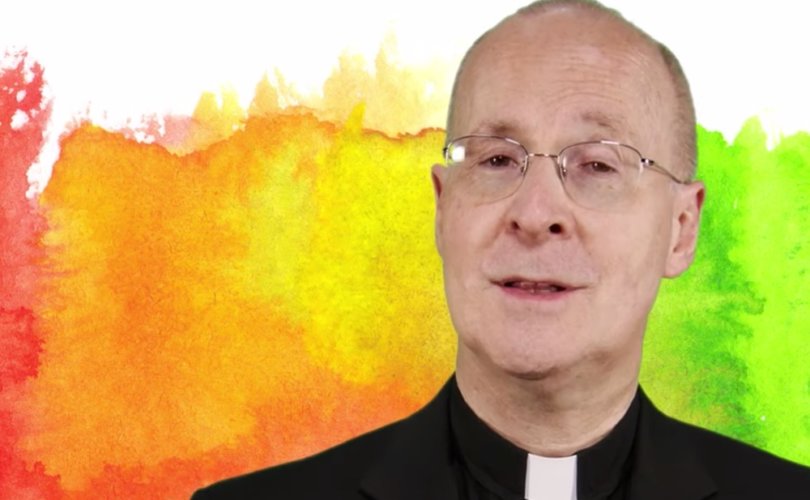 NEW YORK, January 31, 2020 (LifeSiteNews) ― An LGBT activist priest has issued a new video in which he criticized the Catholic Church for dismissing employees who contract same-sex “marriages.”

“In the US, the Church must stop firing married [sic] LGBT people from their positions in Catholic institutions,” the Catholic priest said.

“Because if you’re going to fire people for not following Church teaching that would include a lot more than just married [sic] LGBT people,” Martin continued.

There have been a number of high profile cases in the United States involving Catholic Church employees who publicly rejected her teaching on marriage by contracting same-sex civil “marriages.”

Last June, Indiana Archbishop Charles Thompson stripped a Jesuit-run school of its Catholic label after the school refused the archbishop’s directive that it not renew a teacher’s contract who had ‘married’ a same-sex partner. The Archbishop stated at the time that “to effectively bear witness to Christ, whether they teach religion or not,” all teachers “in their professional and private lives must convey and be supportive of Catholic Church teaching.”

In 2016, the former head of a Catholic assisted-living center in Richmond, Virginia sued the Saint Francis Home for dismissing him when he disclosed that he was “married” to a man. A diocesan spokeswoman said at the time that “as a Catholic organization, we expect the employees of the diocese and its ministries to uphold and embody the consistent values and truths of the Catholic faith, including those preserving the sanctity of marriage.”

In 2015, the director of education of a Catholic school in Philadelphia was dismissed allegedly because she had been “married” to another woman for eight years. The morality standards for the local Archdiocese stated that it has “the sole right and duty to operate its school system in accordance with the philosophy of Christian education, the doctrines, laws, and norms of the Catholic Church,” and leave the possibility of “dismissal of a teacher for serious and public immorality and/or public rejection of official doctrine or laws of the Church.”

In these cases, what was at stake was not that the employees experienced same-sex attractions but that they had publicly violated the teaching of the Catholic Church on marriage.

The Catholic Church does not recognize legal arrangements between same-sex couples as marriage. Marriage, according to the Catholic Church, is a sacred covenant between one woman and one man for life, established for the procreation of children and the good of the couple. The Church teaches that marriage between Christians is a sacrament, which is defined as an “efficacious [sign] of grace, instituted by Christ and entrusted to the Church, by which divine life is dispensed to us” (CCC 1131).

In a 1986 letter to bishops about how to care for persons with same-sex attraction, the Church stated that “special concern and pastoral attention should be directed toward those who have this condition, lest they be led to believe that the living out of this orientation in homosexual activity is a morally acceptable option. It is not.”

In his video, Martin also decried bishops who are opposed to the decriminalization of homosexuality.

“Worldwide the Church needs to look at countries where LGBT people are routinely beaten, arrested, and executed,” he said.

“In 70 countries, same-sex [sexual] relations are illegal, and in six countries you can be executed for engaging in them,” he continued.

“So in these places LGBT issues are ‘life issues.’ Tragically, some Catholic bishops have supported these repressive laws. Thus the decriminalization of homosexuality is an important measure for the Church to support.”

The Catholic Church has come under fire by other LGBT activists for not supporting decriminalization. In 2008, Archbishop Celestino Migliore, then the Vatican’s permanent observer at the United Nations, explained a U.N. resolution aimed at this goal could result in pressure to implement same-sex “marriage.”

According to Reuters, then-Vatican media chief Fr. Federico Lombardi said at the time “no one wants the death penalty or jail or fines for homosexuals” but pointed out that fewer than 50 states had “adhered to the proposal in question.” More than 150 had not.

Throughout his presentation, Fr. Martin referred to same-sex attracted Catholics as if they were a group semi-detached from the Church, defined predominantly by their sexual inclinations. He spoke as if these Catholics are routinely ignored, suggesting that listening to them would be a “brand new” step for the Church. In reality, there has been a ministry specifically for faithful Catholics with same-sex attractions since Fr. John F. Harvey founded his Courage Apostolate in1980. Courage International now ministers in at least 18 countries.

Meanwhile, Fr. Martin suggested that Pope Francis is fully supportive of his ideas. In September 2019, the editor-at-large for America magazine met Pope Francis at a Vatican Dicastery for Communications meeting in Rome. Francis invited Martin to the Apostolic Palace for a meeting, but asked that the details of their conversation not be shared with the media, only with “individuals and groups,” so that the two could talk “freely.”

“But I can say that the Holy Father and I spent the entire time talking about LGBT Catholics and about LGBT people worldwide,” Martin said, “and that I felt inspired, consoled, and most of all encouraged to continue this ministry in peace.”

“It’s hard to express how grateful I am for those thirty minutes.”