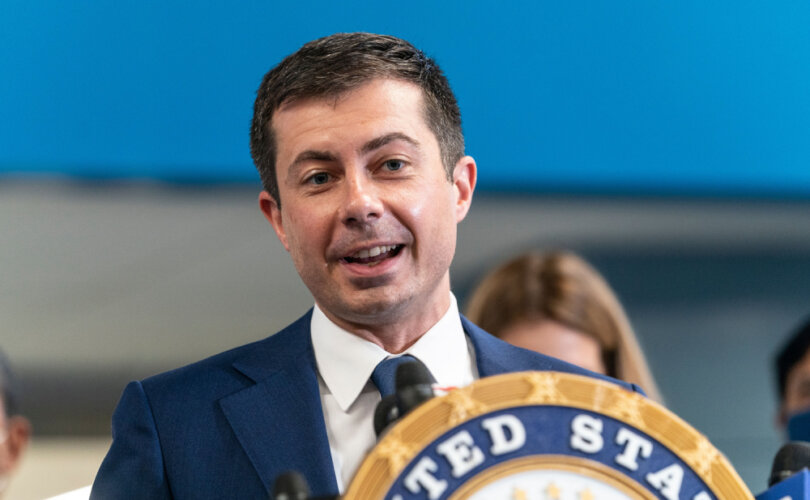 Writing on Twitter about Democrat Pete Buttigieg, the former mayor of South Bend, Indiana, and former presidential candidate who is now the U.S. Secretary of Transportation and in a same-sex union, Martin said, “Pete Buttigieg is married.”

Buttigieg, an Anglican who was baptized Catholic and attended Catholic schools, came out as “gay” in 2015 and entered into a same-sex “marriage” in the Anglican Church in 2018. His “married” status has come under fire in recent online comments, with the Jesuit priest rushing to his defense.

Like it or not, and whether or not you support same-sex marriage, @SecretaryPete is legally married to @Chasten Buttigieg. A meditation on rage, love, social media, homophobia, respect, tolerance, and Jesus. https://t.co/Vo6tUWNDZZ

Martin’s statement came in reply to a tweet by the Catholic League in which it called such a marriage a “legal fiction,” writing, “It is true that Pete Buttigieg is legally married, but that is a legal fiction.”

It is true that Pete Buttigieg is legally married, but that is a legal fiction.https://t.co/9P9v4jzKyg pic.twitter.com/1uK0OfXmTI

In clarification, the Jesuit priest doubled down, claiming that those refuse to acknowledge same-sex “marriage” as something recognized by the state, and in this case, by the man’s church, “ignore reality.”

Martin wrote, “Surprised this got so much attention. Like it or not, Pete Buttigieg is legally married. You may disagree with same-sex marriage (or not). But @SecretaryPete is married in the eyes of the state, and his church, as much as anyone else is. To claim otherwise is to ignore reality.”

Like it or not, and whether or not you support same-sex marriage, @SecretaryPete is legally married to @Chasten Buttigieg. A meditation on rage, love, social media, homophobia, respect, tolerance, and Jesus. https://t.co/Vo6tUWNDZZ

In a rebuke to the dissident priest and echoing the statement of the Catholic League, Bishop Joseph Strickland of Tyler, Texas, then took to Twitter to defend the nature of marriage as impossible between two men, saying, “Marriage is between 1 man & 1 woman.” The bishop reaffirmed Catholic teaching and natural law that any attempt to change this means that “no marriage exists no matter what words are used.”

Marriage is between 1 man & 1 woman, committed for life & open to children. Attempts to redefine marriage fail to change this reality. If an element of the above definition is altered then no marriage exists no matter what words are used. Living a fiction is unhealthy.

Fr. Martin is notorious for his open and heretical promotion of homosexual lifestyles and his celebration of homosexuality as a great “gift” for the Church. As LifeSiteNews’ Michael Haynes has previously reported, Martin has a “longstanding record of promoting LGBT ideology in dissent from Catholic teaching. The Jesuit priest is described as ‘arguably the most prominent activist’ in the Church for LGBT issues.

As Haynes states, “Among his most notorious actions, Martin has promoted an image drawn from a series of blasphemous, homoerotic works, showing Christ as a homosexual, promoted same-sex civil unions, and has described viewing God as male as ‘damaging.’”