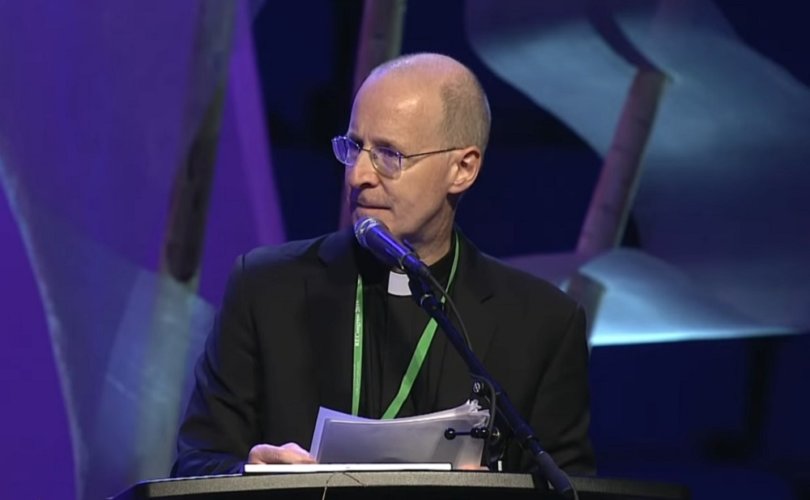 MINNEAPOLIS, February 25, 2020 (LifeSiteNews) ― An LGBT activist priest told an audience in a dissident Catholic parish that Pope Francis supports his LGBT ministry and that the pontiff wants the Church to “move on” from its fight against abortion.

Fr. James Martin, S.J. was recorded giving these and other illuminating thoughts on January 9 during a talk at St. Joan of Arc Catholic Church in Minneapolis. The recording was edited and put online by the American Catholic watchdog group “Complicit Clergy.”

“Pope Francis is the first pope to talk about gay people,” Martin told his listeners.

Martin told the audience of his September 30 meeting with Pope Francis but said the pontiff had asked him to keep the details private.

“But I will say this: He met with me for 30 minutes, and we talked about LGBT Catholics and reaching out to them, and that I felt very encouraged, and consoled and inspired,” Martin revealed.

“So that was a sign of his support for that kind of ministry (and) so the Church, I think, is really moving ahead.”

Martin gave a sample of his LGBT ministry by telling his audience that they should not accept the teachings of the Bible that are critical of homosexuality.

“Unfortunately, a lot of people use biblical texts to support their homophobia,” he said.

“You know, Leviticus and St. Paul. The problem with looking at the texts in that way is that we don’t look at every text in that way in Leviticus,” he continued.

Martin indicated that we no longer share the Bible’s acquiescent attitude toward slavery because “we understand those things in a different way.”

Martin, whose first degree was from the Wharton School of Business, neglected to mention that the economy of the pre-Christian world was dependent upon slavery and that, for the ancient world, slavery, including the debt slavery Jesus Christ mentioned in His parables, was a fact of life. Instead, Martin called those who accept Bible proscriptions against homosexual sex “fundamentalists” and “literalists.”

“When it comes to LGBT matters, suddenly we become fundamentalists. We become literalists,” he said.

“And so what happens is that they cherry pick these verses out of Leviticus and out of St. Paul. … By the way, homosexuality at the time (was) much different that the way we understand what’s going on right now,” he added.

The recording did not capture whether or not Martin explained how homosexual acts of the ancient world differ from those of today.

“But the point is,” he continued, “we have to understand those readings in their historical context.”

“Any reading that leads us to be hateful, or to hate people … is something that should be looked at carefully and discerned.”

Basing itself on Scripture and the natural law, the Catholic Church teaches that homosexual acts are “acts of grave depravity” and are “intrinsically disordered.”

In a 1986 letter to bishops, the Church said “special concern and pastoral attention should be directed toward those who have this condition, lest they be led to believe that the living out of this orientation in homosexual activity is a morally acceptable option. It is not.”

Martin also discussed the “reaction” and “response” in the United States to Paul VI’s Humanae Vitae and to the Sexual Revolution. Martin said he believed that there is a “Calvinist” way of looking at sexual and sex-related issues in the United States, but did not explain what he meant by his reference to the anti-Catholic Protestant preacher.

Martin did, however, call for American Catholics to “move beyond” defending sexual morality  and suggested that Pope Francis himself wants them to do so.

“How can we move beyond it?” Martin asked rhetorically.

“By reminding people, as Pope Francis says, that there are other issues.”

Martin thinks that the most important thing the pontiff has said was in an interview with “a friend of (Martin’s)” Antonio Spadaro, the editor of Jesuit magazine La Civilitá Cattolica, in 2013.

“He said, ‘Look, people understand what the Catholic Church teaches about abortion and birth control and same-sex marriage. They understand that,” Martin said.

“They know it. It’s not that it’s not important, but (Francis) said, ‘It’s time to look at other issues.’ He said, ‘It’s like a teacher. Once they’ve covered that part of the course, it’s time to move on.’ Right?” the priest continued.

“And I think that’s what Pope Francis is trying to get us to do.”

Martin used the soon-to-be released Querida Amazonia, which he expected to discuss the environment and the economy, to illustrate that Catholic doctrine is “more than just sex.”

“The moral life is more than just the sexual life,” he asserted.

Martin stressed that he receives support from his Jesuit superiors, from his Jesuit brethren, and “given the meeting, the support of the pope.” He also cited the public support of such bishops of Cardinal Blase Cupich of Chicago and Archbishop Wilton Gregory of Washington, D.C. Martin mentioned that he had been invited to speak at the World Meeting of Families and revealed that the Vatican had picked the title of his talk, which was “Showing Welcome and Respect in Our Parishes to LGBT People and their Families.”

Martin also noted that Pope Francis had put their meeting on the public calendar and that he had been invited to speak to this year’s annual conference of the Association of Catholic Colleges and Universities.

But before emphasizing his own popularity, Martin called for the traditionalist “resistance” movement to be “resisted,” to the point of excluding tradition-minded Catholic men from the seminaries.

“There was always a minority position in the Second Vatican Council that is coming up again,” he told his audience.

“A resistance. And I think we have to call it that. It is a resistance to the Second Vatican Council, to some of the reform, to the greater influence of the laity, right?” he continued.

“To increase the role for women, to Mass in the vernacular, to engagement with the world.”

“I think that resistance should be resisted as charitable as you can,” he said.

Martin said he believes seminary rectors, bishops and archbishops should ensure that “the people they’re accepting in the seminaries, and more importantly, the formation they’re getting, is forming them for the Church of today and not the Church of 1956.”

Martin, 59, is well-known for his ambiguous doctrines regarding homosexuality. St. Joan of Arc Catholic Church is notorious for its “Gym Liturgies” and presentations by speakers at odds with Catholic doctrine, including same-sex couples with kids in their care.

St. Joan’s has been the site of many controversies in the Archdiocese of St. Paul and Minneapolis regarding ministry to people with same-sex attractions. In 2008, for example, there was a scandal when Bishop John Nienstedt told the community it could not have a Gay Pride prayer service. A commitment to LGBT “rights” was fostered in the community by the late Father Harvey Egan, who credited feminist Gloria Steinem for helping him develop the parish.