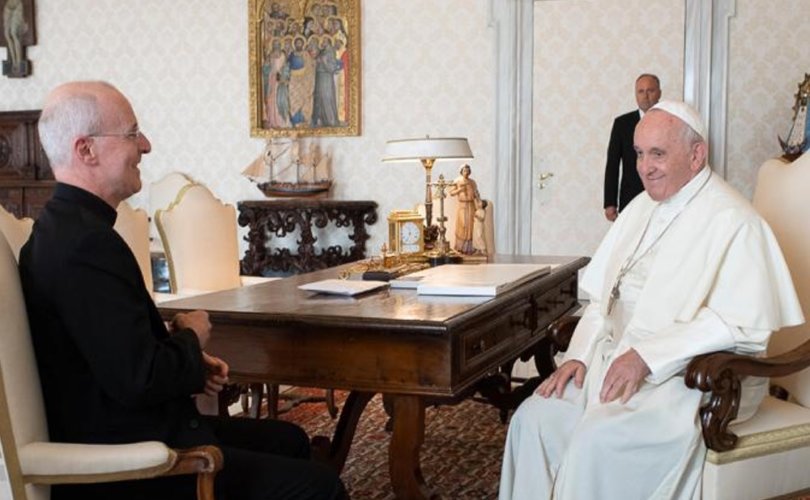 November 1, 2019 (LifeSiteNews) — Pro-LGBT Jesuit priest Fr. James Martin is claiming his private meeting with Pope Francis in September was “a public sign” of the pontiff’s “support” for his work — which the American Jesuit describes as “ministering with LGBT Catholics” but which critics say is an indefatigable campaign to change Catholic teaching on homosexuality and other deviant sexual behaviors.

Martin tweeted to his 255,800 followers Wednesday:

One month ago today, I was invited to meet Pope Francis in the Apostolic Palace, 30 minutes that encouraged me to continue ministering with LGBT Catholics. I hope that this event, a public sign of his support, inspires many others to reach out to that community in our church. pic.twitter.com/Kmq1Hv5h8R

But Martin isn’t the first to allege the private audience signaled the Holy Father’s support for his homosexual advocacy.

The liberal Jesuit America magazine, of which Martin is editor at large, interpreted the meeting shortly after it took place as a “highly significant public statement of support and encouragement” for the celebrity priest, LifeSiteNews reported then.

Martin tweeted then that the meeting, during which, he said, he and the pontiff laughed “several times,” showed the pope’s “deep pastoral care for LGBT Catholics and LGBT people worldwide.

One of the highlights of my life. I felt encouraged, consoled and inspired by the Holy Father today. And his time with me, in the middle of a busy day and a busy life, seems a clear sign of his deep pastoral care for LGBT Catholics and LGBT people worldwide. ([email protected]). pic.twitter.com/1BeaiVh0Q4

Martin’s non-stop though often coy dissent from Catholic teaching on homosexuality has drawn fire from high-ranking churchmen and Catholic lay academics (here and here). The American Jesuit received an award in 2016 from the dissident pro-homosexual group New Ways Ministry, which the Congregation for the Doctrine of the Faith and the U.S. Catholic bishops have condemned but Martin consistently defends.

Cardinal Robert Sarah, prefect of the Congregation for Divine Worship and the Discipline of the Sacraments, called Fr. Martin “one of the most outspoken critics of the Church’s message with regard to sexuality,” and Cardinal Raymond Burke described Martin’s teaching as “not coherent with the Church’s teaching on homosexuality.” More recently, a U.S. bishop and a cardinal rebuked  Martin for questioning the Bible’s condemnation of homosexuality.

At the same time, Pope Francis appointed Fr. Martin in April 2017 as one of the 13 consultors who advise the Vatican's Dicastery for Communications and the  Vatican invited him to speak at the 2018 World Meeting of Families in Dublin on “Exploring how Parishes can support those families with members who identify as LGBTI+.”

Thank the Lord we have Courage that ministers to people with SSA and guides them in chastity and the authentic teachings of the Church.

No thank you Father for your heresy.

Did ya'll talk about the ONLY Vatican-approved ministry to those with same-sex attraction–the Courage apostolate??? I'm sure you must have, as @NewWaysMinistry  has been condemned by US bishops as NOT “Catholic”–good on ya, Jim! @RCCourage

Austin Ruse, who has engaged on Twitter with Fr. Martin previously, observed:

I doubt he knows of your views on this issue, ie, that you look forward to married gays kissing in Mass.

Others sounded a bit sarcastic.

Didnt know a meeting with the Pope was tantamount to him publicly approving of your teaching and “mission”?

If a meeting is approval then we have bigger issues than a wayward priest encouraging people to continue in sin while pretending its compassion.