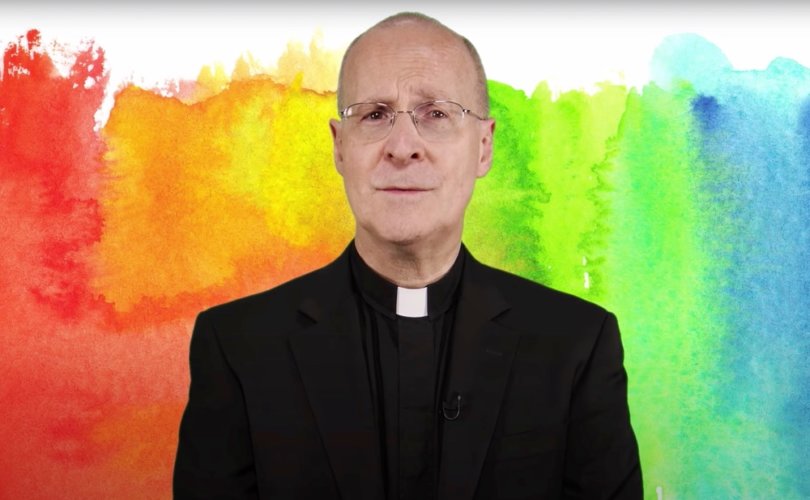 UNITED STATES, March 11, 2021 (LifeSiteNews) – Father James Martin, has defended his recent reference to God as “Her,” by penning an article in America Magazine in which he claimed that feminine imagery of God was “not contrary to our faith.” Martin also criticized a male concept of God as promoting a harmful concept of patriarchy.

For the Second Sunday in Lent, the well-known Jesuit originally shared a reflection by the Catholic Women Preach organization, which referred to God as female, commenting on how “God will let you glimpse Her power.”

After facing significant outrage from Catholics, Martin availed of his position as “editor at large” of America Magazine, to double down on his position on the female concept of God.

In a post entitled “God is not a man (or a woman),” Martin revealed that he had no problem with calling God “her.”

“God is not a man. And while Jesus Christ was (and is) a man and invites us to call God the Father, that does not mean that God is male or that God is only masculine,” he wrote.

Martin claimed that it “just as theologically correct to use feminine imagery about God as it is to use masculine imagery” and that it is “not contrary to our faith, since it’s part of Scripture, albeit an overlooked and even ignored part.”

Martin then noted that he did not view God as a woman either, adding that “[t]he mystery of the Triune God goes beyond the confines of sex or gender.”

The prominent LGBT advocate described how he believes it to be “damaging” to “envision God as solely one gender.” Martin continued to describe what he viewed as a detrimental effect of this view, pointing to “patriarchal cultures,” and how the common concept of God as male, effected theology, public and private worship, and the Christian life.

He gave examples of work done by feminist theologian Sister Elizabeth Johnson, who has spent much time in presenting God in a female manner. Johnson takes feminine images or analogies from the Bible and interprets their usage to suggest that God should be understood as a female.

Using her ideas, Martin then even hinted at nefarious actions which were taken to ensure that God was artistically portrayed as a male, rather than a female, presumably as an example of the damaging patriarchal culture he had mentioned earlier.

Noting the shocked response from faithful Catholics, Martinx referred back readers to the Scriptures, suggesting that such a reaction “mirrors some of the reactions we see in the Gospels when Jesus invites people to think of God as bigger than they had originally imagined.”

In fact, Aquinas has already answered Martin’s theories. Early on in his magnus opus the Summa Theologiae, Aquinas taught that the “name HE WHO IS most properly belongs to God.” The formula, given by God to Moses (Exodus 3:13-14), is the most proper name for God, wrote Aquinas, due to its signification, universality and consignification.

This Scriptural passage is one which Martin notably avoids mentioning, even though it is one whereby God provides a direct answer to the manner in which He is to be understood by men: “I Am Who Am…He Who Is.”

The male concept of God as Father, which Fr. Martin described as evidence of “damaging…patriarchal cultures,” is one taught by Christ Himself in the Scriptures – another Scriptural example which Martin avoids mentioning. It was how He taught the Apostles to pray and refer to God: “Thus therefore shall you pray: Our Father who art in heaven, hallowed be thy name.”

Christ repeatedly refers to God the Father throughout the Gospels, and mentions how He is the one who shall reveal God to man, and Christ does so by revealing God as Father. “And no one knoweth the Son, but the Father: neither doth any one know the Father, but the Son, and he to whom it shall please the Son to reveal him.”

It was with this phrase also, denoting God as Father, that St. Paul opened every one of his Epistles. In sending his greetings to the various recipients of his letters, Paul consistently mentions in the first few lines, “God our Father.”