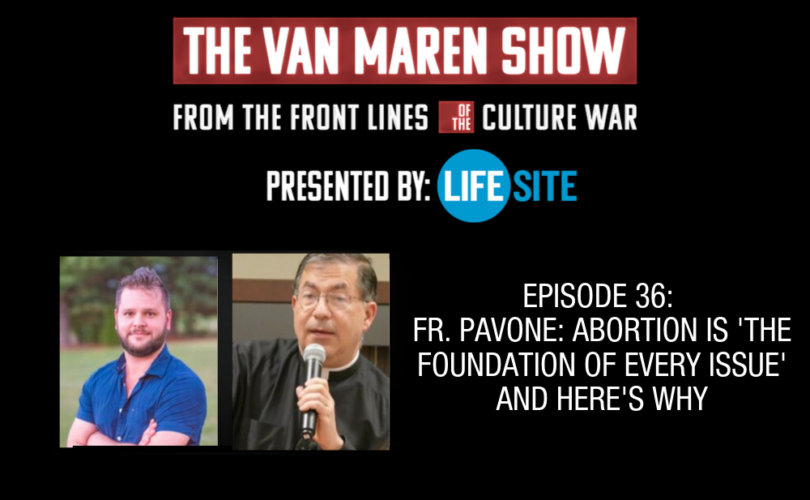 October 2, 2019 (LifeSiteNews) – On this week’s episode of The Van Maren Show, Jonathon Van Maren speaks with Father Frank Pavone, the National Director of Priests for Life, the largest pro-life ministry in the Catholic Church. He is also the President of the National Pro-Life Religious Council, the National Pastoral Director of the Silent No More Awareness Campaign and of Rachel's Vineyard, the world's largest ministry dealing with healing after abortions. He travels throughout the United States to an average of four states a week preaching and teaching against abortion.

Van Maren speaks with Fr. Pavone about his experiences as a pro-life priest and leader. Fr. Pavone discusses his dedication to the pro-life movement as a high school student and then as a seminarian. After he was ordained a priest, he preached about abortion almost every weekend from the pulpit, leading to a profound impact on his parish.

Fr. Pavone shares about his encounters with Dr. Bernard Nathanson, an abortionist who helped found NARAL but later became pro-life. Dr. Nathanson stated that the silence of the Church played a large role in the early spreading of abortion. Fr. Pavone summarizes, “the Church was quiet when she should have been shouting from the rooftops.”

Because of that, it is the responsibility of pastors to be vocal about abortion and life issues because doing so encourages others to stand up for the truth. Fr. Pavone works to educate and train priests, deacons, and seminarians to speak out against abortion. He says he is often told by others that just his being out there and being a public presence encourages them to be more vocal.

Fr. Pavone spends some time sharing his most memorable and meaningful stories from his decades in the pro-life movement. One awesome story is how he developed a friendship with Norma McCovey, Jane Roe of Roe v. Wade. He also tells Van Maren about his encounters with Mother Teresa and his friendship with Pope John Paul II.

One key point Van Maren and Fr. Pavone discuss is the centrality of the abortion issue. There is a tendency to think of abortion as “just one of many issues.” However, “it is the foundation of every issue.” Fr. Pavone emphasizes the importance of abortion as the most pressing issue of our time.