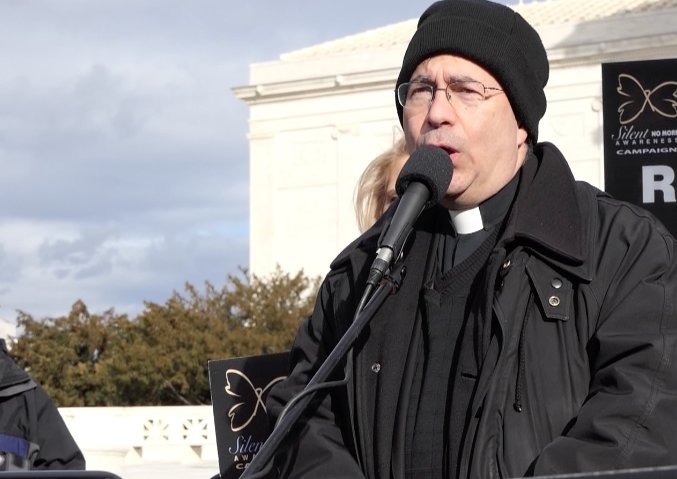 February 9, 2017 (LifeSiteNews) – Editor's Note: Father Frank Pavone, the National Director of Priests for Life, has voiced his support for a New Jersey priest in hot water with his archdiocese after a media hit piece was published against him.

NJ.com published a scathing piece about Father Peter West in Orange, New Jersey. Father West is outspokenly in favor of the Catholic Church's moral teachings on life and family. He has shared those opinions, as well as opinions on matters of prudential judgment within Catholic teaching – such as immigration – with a large facebook audience. He also has criticized college students, commonly referred to as “snowflakes”, who demand “safe spaces” from ideas with which they disagree.

The Archdiocese of Newark says it is “concerned about Father West's comments and actions, and will be addressing them according to the protocols of the Church.”

Below is Father Pavone's response to the controversy:

I had the privilege of working alongside Fr. Peter West on a daily basis in the pro-life arena for some 15 years. This is a faithful and prayerful priest who is not afraid to do exactly what our Lord and his Word call us to do: to Preach the Gospel in season and out of season, whether convenient or inconvenient, welcome or unwelcome.

Some people ask whether he has gone too far in some of his comments condemning political leaders and the evils they embrace.

My response is that in an age when the vast majority of clergy do not go far enough, we need more priests like Fr. West.

I was privileged to know Dr. Bernard Nathanson, a founder of the abortion industry in America. He said that he got away with unleashing abortion on America because the Catholic priests were asleep and relatively silent. And the Second Vatican Council said quite clearly, “At all times and in all places, the Church should have the true freedom to teach the faith, to proclaim its teaching about society, to carry out its task among men without hindrance, and to pass moral judgment even in matters relating to politics, whenever the fundamental rights of man or the salvation of souls requires it” (GS 76).

The Church in America risks becoming irrelevant if we buy into the absurd idea that we can always be neutral. As Holocaust survivor Elie Weisel declared, “I swore never to be silent whenever and wherever human beings endure suffering and humiliation. We must always take sides. Neutrality helps the oppressor, never the victim. Silence encourages the tormentor, never the tormented.”

When the Democratic party and its heroes like Hillary Clinton embrace, promote, and fund the holocaust of abortion, are we really going to pretend that we can treat them even-handedly as we do the Republican party, which declares in its platform that “the unborn child has a fundamental right to life which cannot be infringed. We support a human life amendment to the Constitution, and legislation to make clear that the 14th Amendment s protections apply to children before birth” (p. 13).

I am not surprised that some want to punish Fr. West for being “pro-Trump.” In our secular society, thugs beat people up and ridicule them out loud in public for showing support for Mr. Trump. In the Church, we see the same bullying, but some try to justify it with fancy ecclesiatical language and dress it up in clerical robes. But it's still just bullying and it's still just as deplorable. I will proudly stand with Fr. West, and I'll be wearing my “Make America Great Again” hat.