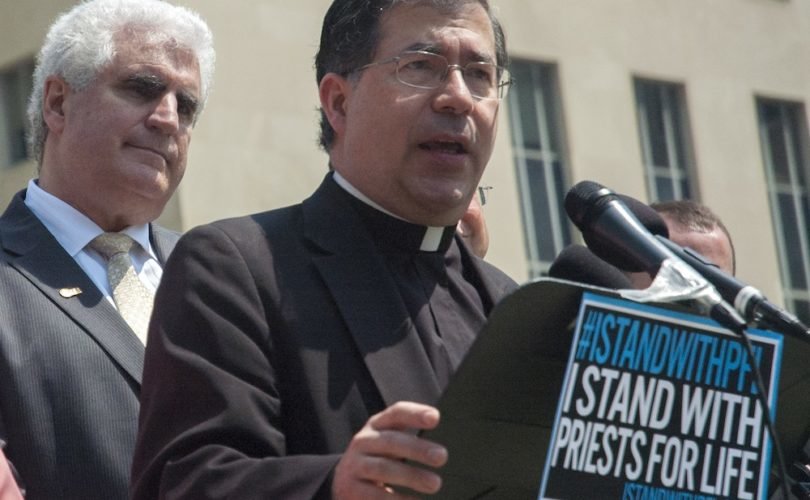 NEW YORK, December 2, 2015 (LifeSiteNews) – Father Frank Pavone is insisting the pro-life movement will not back down after last week's shooting. In fact, in a statement released on Wednesday, the pro-life leader said the movement “will intensify both our language and our protests.”

Since last week's shooting at a Colorado Springs Planned Parenthood clinic by a man with possible mental imbalance, many abortion advocates in Washington and the media have blamed pro-life Americans for the shooting. They have also demanded pro-life advocates back off their efforts to save the unborn.

According to the Priests for Life national director, he will do the exact opposite. “The senseless and universally denounced shootings that took place in Colorado Springs on Friday have brought a number of inquiries to me and other pro-life leaders regarding whether we intend to soften our language or modify our actions regarding Planned Parenthood and abortion generally,” said Pavone in a statement.

“In short, the answer is 'No.' In fact, we will intensify both our language and our protests. We neither participate in nor condone violence. Our messages and our protests did not start because of irresponsible and deranged perpetrators of violence, nor will they change or cease because of such people,” he said.

STORY: Everything we know about the Planned Parenthood shooter

Instead, wrote Pavone, Priests for Life will continue to point out that “Planned Parenthood — and the abortion industry generally — are dismembering and decapitating little children on a daily basis, and for a profit. We describe abortion that way because that is how medical textbooks describe it.”

Pro-life verbiage “reveals these horrors and opposes them, but the language of the abortion industry not only admits these realities but justifies them. That's the kind of language that does damage to the moral framework of our society,” Pavone said.

Pavone said that his group plans to “intensify our multi-pronged Expose Abortion effort…using the words of abortionists themselves, the photos and videos of abortion, and the corruption of the abortion industry to awaken the public to this violence….Likewise, on Thursday, January 21, starting at 9 a.m., we will hold a national prayer rally and protest against Planned Parenthood at its newest Washington D.C. location (1225 4th St. NE).”

According to Pavone, “Planned Parenthood and the entire abortion industry are committing crimes against humanity.” He also said that his group “will steadfastly oppose [Democrats'] efforts to keep America's holocaust going strong.”