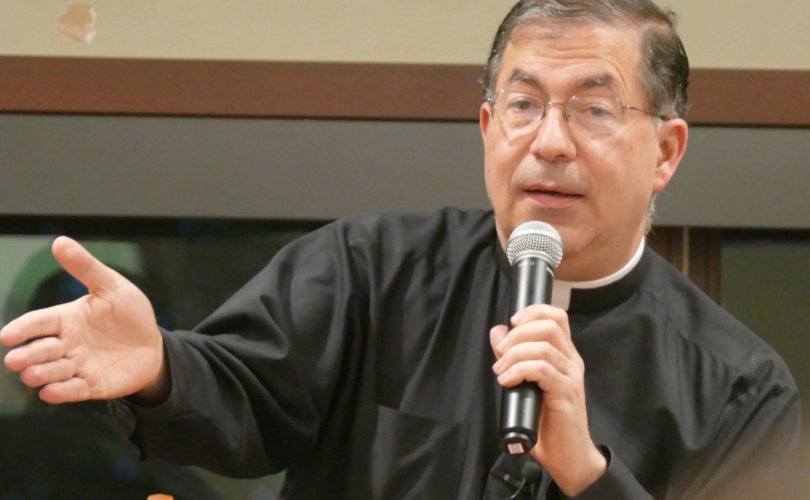 GRAND RAPIDS, Michigan, September 30, 2019 (LifeSiteNews) — There is a “war” going on between the abortion industry and pro-lifers, and the two cannot co-exist. Either “we shut them down or they shut us down…we are dealing with a clash of absolutes.”

Pavone has been the national director of Priests for Life since 1993. His appearance was coordinated by the local Knights of Columbus. A prolific speaker who often appears on television and radio, he is one of the most respected voices on abortion in the world. In 2016, he served on President Trump’s Catholic advisory committee.

Addressing a packed room that included many young families, Pavone passionately explained how the abortion industry wants more unborn babies to be killed so they can “profit” from it. The industry views crisis pregnancy centers as “big threats” to their business model, he said.

“You succeed, they fail. There is no middle ground. You save moms from abortion, they lose business. There’s no third way. It’s one or the other.”

Mincing no words, Pavone shared gruesome stories about how abortionists play with the bodies of the unborn children they murder as if they were bowling balls and chicken bones being snapped in half.

“They disrespect the child in life and in death. They never tell the truth about abortion…they never mention the terms 'blood,' 'arms,' 'legs,' 'skull,' 'dismembered.' They only speak about ‘choice.’” In reality, “there is no choice…only the coercive power of despair.”

Pavone said that the pro-life mission “is to replace fear with hope [and] to extend hands of mercy.” The destiny of mother and child are intertwined inextricably, he said. “You can’t hurt one without hurting the other.”

Pavone also told his captivated audience to “be appalled, but don’t be surprised” by recent revelations that deceased abortionist Ulrich Klopfer hoarded over 2,200 aborted babies at his home. “Once your conscience is so corrupted that you will tear a child apart with your hands…anything goes after that.”

Among those attending the dinner were faculty and students from nearby West Catholic High School. Several teachers from the school told LifeSiteNews that pro-lifers simply cannot be anti-abortion. They need to help the family after the baby’s birth.

Paula Veneklase, executive director of HELP Pregnancy Crisis center, informed LifeSite that roughly 330 women visit them each month. Almost 90 percent choose life. Since last fall, the center has performed 175 pregnancy tests and 62 ultrasounds thanks to the help of 50 volunteers.

“We exist to be with the mother as she goes along this journey. We try to plant some seeds of hope so the women can look beyond today,” Veneklase said.

Throughout the evening Fr. Pavone hammered home what he called the “connection” between the efforts of crisis pregnancy centers and the fight for life in the political arena. “The civil rights movement of today is the pro-life movement,” he exclaimed. “If we want the right kind of laws, we gotta have the right kind of lawmakers.”

Pavone praised Michigan for voting “the right way” in 2016 while also touting President Trump’s judicial nominees. In an interview with LifeSite before his speech, Fr. Pavone called President Trump “the most pro-life president we’ve ever had.”

Aside from his work at Priests for Life, Pavone is the pastoral director of Rachel’s Vineyard, an abortion healing organization. During his remarks at the fundraiser, he predicted Roe v. Wade will be overturned “in the not too distant future.” He also said extreme pro-abortion politicians across the country are “desperate” because they see their control “slipping away.” The industry is “in a state of collapse!” he thundered. “This is a sign of their weakness…they are dying and saying to themselves, ‘we need to grab everything.’”

Fr. Pavone said that crisis pregnancy centers would still be needed even if legal protections were extended to the unborn because there are always going to be moms who are afraid. He also explained how abortion is unlike other social justice issues.

“To save children’s lives from the violence of abortion is a cause so great and so urgent that if all the effort and resources of the thousands of pregnancy centers around this country…were organized and carried out just for the purpose of saving one human life, it would all be more than worth it.” The “value of an individual human life is inestimable. There is no price tag on it!”