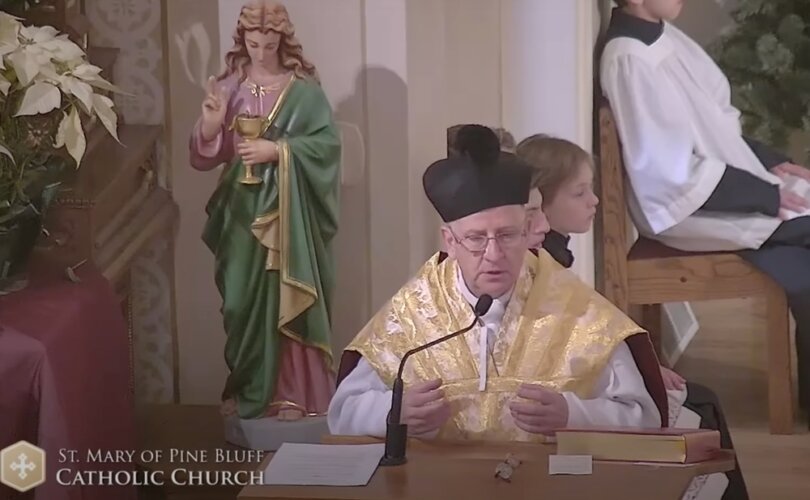 PINE BLUFF, Wisconsin (LifeSiteNews) — Well-known Catholic priest, theologian, philosopher, and exorcist Father Chad Ripperger marked the Feast of the Holy Family by issuing a stark warning about the precarious state of modern family and married life, which he said are “under full-blown attack.” He said it’s important to recognize the nobility of motherhood and the natural law structure of marriage and family life in order to restore the culture.

Fr. Ripperger made the comments in a sermon delivered during the 7:30 a.m. Traditional Latin Mass at St. Mary’s of Pine Bluff, Wisconsin. He began by citing statistics suggesting that people today are less likely to value loyalty in marriage, and then blasting the corrosive effects of no-fault divorce.

“There’s not a single aspect of married or family life that’s not under full assault by our culture,” he said.

In his Sunday sermon, the 58-year-old theologian noted that marriage is defined as “a solemn contract between a man and a woman for the sake of having children. The primary end is having children. That’s what it’s ordered towards.”

“This is something which, unfortunately, has not been understood today,” he continued, adding that many people today no longer even recognize that marriage can only be between a man and a woman.

“It’s an abomination,” he said. “There’s no way that God isn’t going to afflict us in some manner as a result of taking on something that is that disordered.”

The exorcist added that homosexual behavior is “so disordered” that even the demons, according to St. Catherine of Siena, are repulsed by it.

“And yet today it’s glorified,” he said.

According to Fr. Ripperger, much of the support for homosexual unions derives from the “false principle” that “if people love each other,” they should “be able to get married.”

However, he pointed out that even the definition of love is misunderstood to mean feelings and emotions, rather than “willing the good of the other.”

On the topic of rightly ordered love, he then moved on to speak about the proper order of love in marriage, something he said has been obliterated by feminism.

“If you look at the feminist movement, all it is, is the curse of Eve on steroids,” he quipped. “The curse of Eve is essentially this: That when Eve ate the fruit, she essentially stepped out from underneath the authority structure of God and Adam and wanted self-sufficiency.”

He said feminism got off the ground via communism and took hold in western culture during the Second World War when women who had newly entered the workforce came to see marriage as making them dependent, failing to recognize that wives have a right to be financially supported by their husbands. He added that husbands also have a right for their wives to stay home and raise the children.

According to Fr. Ripperger, the structure of family life is embedded within natural law, a reality made manifest by the rise of emotional disorders in children who have been handed off to daycare workers rather than given the opportunity to form strong bonds with their mothers and fathers.

RELATED: Far-left demand for universal daycare is really about indoctrinating our children

The priest said it’s important to recognize that “a career is never, and will never, be as noble as the office of motherhood,” which he called “one of the most sublime and magnificent offices that God ever created.”

He said the insidious philosophy that has taken root in western society is “a full-blown attack against motherhood,” explaining that transgender surgeries cause infertility by destroying healthy reproductive organs.

According to Fr. Ripperger, the reason that marriage and the family are under attack in the culture is because demons recognize that family, not the individual, forms “the building block of society.”

He said that in a world that now considers having children to be an “evil” that contributes to alleged climate change, an important way to win back the culture is actually to have large, rightly ordered families.

“If you can destroy the family life, you will de facto destroy the culture,” he explained.

“Not just the communists, and not just the liberals, but the demons themselves are scared to death of a good, holy, rightly ordered family,” Fr. Ripperger said.