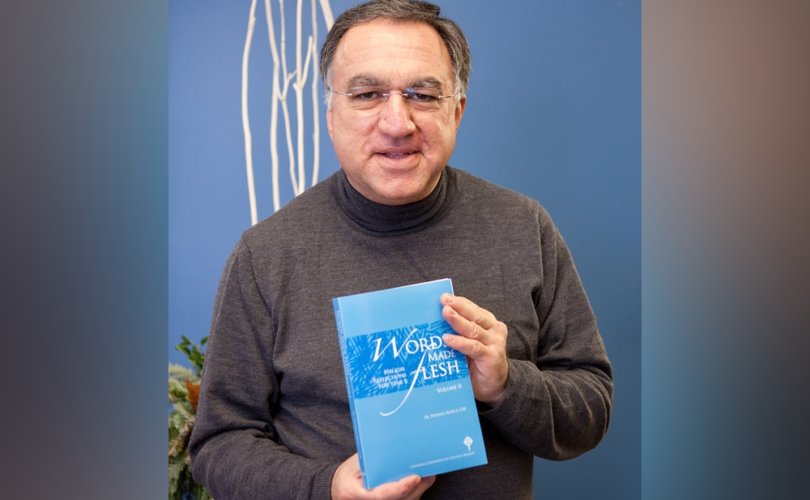 TORONTO, March 22, 2019 (LifeSiteNews) – Over 30 examples of plagiarism (see PDF below) have been found in a book written by Father Thomas Rosica, CSB, and published by the Conference of the Canadian Catholic Bishops.

The book, Words Made Flesh: Biblical Reflections for Year B  by the Vatican spokesman and Salt + Light Catholic Media Foundation CEO, was first published in 2012. The volume is part of a series of meditations on the readings of the contemporary Catholic liturgical cycle. The series is a spin-off of the three-year cycle of reflections Rosica finished for the ZENIT news service in 2011. It was published in partnership with the CCCB.

A close reading of the work revealed that many sentences, paragraphs and even passages in its first 100 pages closely resemble those by other authors. The original sources are as far-ranging as a 1964 advertisement in the Montreal Gazette to a 2003 Gospel reflection by Fr. Paul Scalia. They also include material from Pope Benedict XVI; Fr. Raniero Cantalamessa, since 1980 the Preacher to the Papal Household; and Fr. Frederico Lombardi, the then-chief of the Vatican Press Office, among others.

Perhaps even more surprisingly, two of the unattributed sentences in the text first appeared in the CCCB’s own 1986 Pastoral Letter “New Hope in Christ”.

The uncited borrowings take a number of forms. They are sometimes copied word-for-word from the original source material. Sometimes there are minor changes made to the original text that still preserve its essential structure. At other times there are more significant changes to the expression of the borrowed text while preserving its idea.

Many of Rosica’s reflections can still be found on ZENIT’s online service. Links to his relevant Zenit essays are provided in our compare-and-contrast illustrations below.

Professor Joshua Hochschild of Mount St. Mary’s University, who has been conducting a textual analysis of Rosica’s work, told LifeSiteNews via social media that he was “not surprised” that “Word Made Flesh” contained misappropriated work.

“Based on what I've seen, whether writing about contemporary theology or the saints, whether commenting on Papal news or on Scripture, whether for an academic or a popular audience, Fr. Rosica's lifelong habitual writing process involves taking substantial and uncredited passages from others,” he said.

The Rosica plagiarism scandal has raged online since mid-February when LifeSiteNews discovered that the Basilian Father had misappropriated the work of at least five other men in a speech he gave at the Von Hügel Institute at Cambridge University. After other journalists and academics began to look at Rosica’s other work, he admitted to the serial plagiarism, albeit blaming his interns.

Salt + Light Catholic Media Foundation continues to stand by the embattled Rosica. He has, however, stepped down from the Collegium, one of the governing councils of the University of Saint Michael’s College in Toronto. And Canada’s Globe and Mail has stated that it will no longer publish his writings.

Scholars have discovered that Rosica’s misappropriation of the published work of others dates back over thirty years.

Words Made Flesh: Biblical Reflections for Year B is no longer available for sale from the Salt + Light website, and over a thousand of Rosica’s essays have been removed from its blog.

LifeSiteNews reached out to both the CCCB and to ZENIT  for comment but had not received a response by press time.