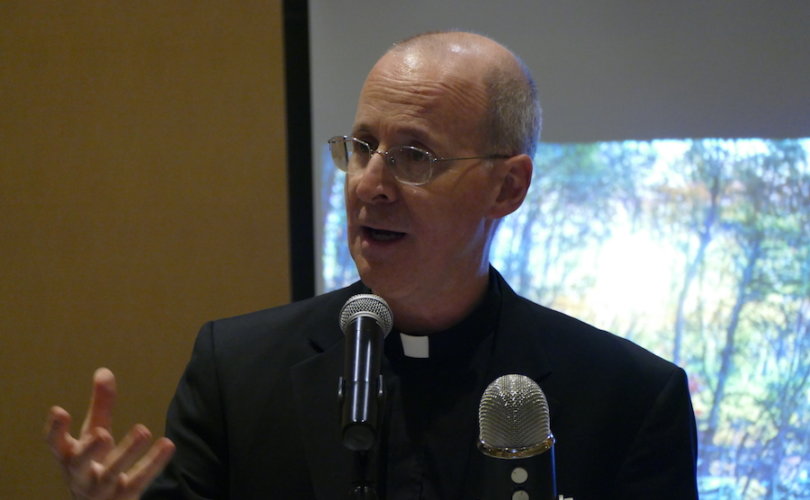 February 23, 2017 (LifeSiteNews) – One of the most well-known Jesuit priests in the United States tweeted his support of boys using the girls' bathroom and vice versa.

Father James Martin is the editor-at-large of America magazine and has a large social media presence. In November, he accepted an award from New Ways Ministry, a dissident group that has been condemned by the Congregation for the Doctrine of the Faith and the U.S. Catholic bishops. During his lengthy acceptance speech, he said the Church should embrace homosexuality's “special gifts.”

Where is Father Martin's concern for girls who don't want to undress in front of boys? For sexual assault victims whose attackers are emboldened by such policies? Or for one of the first passages in the Bible: “male and female he created them”?

#Trans students endure so many indignities already. They should be able to use whatever bathrooms they choose. It's doesn't hurt anybody.

It saddens me that a #trans student cannot choose what bathrooms to use. A basic need. It's an affront to their dignity as human beings.

And who is harmed by a #trans student using a bathroom? I've seen women using men's rooms when the ladies' rooms were full. Who is harmed?

But for Jesus, there is no “other.” There is no “them.” There is only “us.” So we must be about openness, acceptance and inclusion. #trans

Who should stand with the marginalized, the mocked, the bullied, the confused, the outcast, the minority? The Christian should. #trans