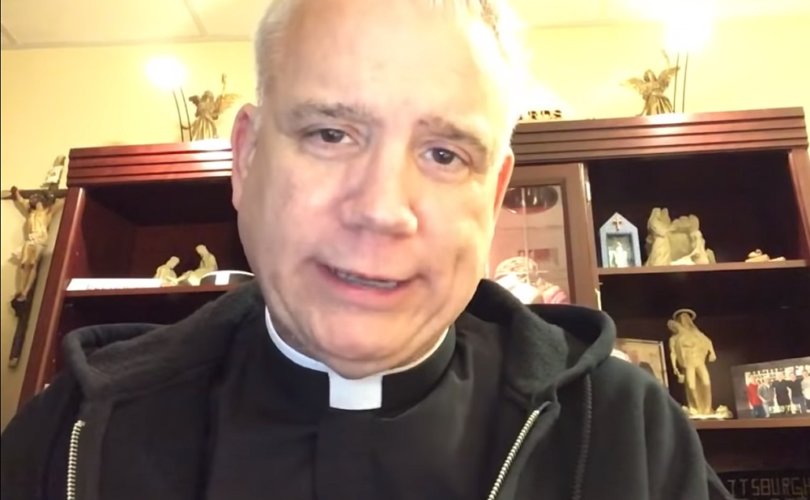 ERIE, Pennsylvania, May 13, 2019 (LifeSiteNews) ― A celebrity priest has apologized to the Catholic media company he has been accused of maligning.

Father Larry Richards, 59, celebrated author of Be a Man and host of EWTN’s Open Line radio show, took to Twitter on Sunday to apologize to Church Militant.

“I want to make a long-overdue apology for something I said this past January at a conference I was speaking at in California,” he said in a video message.

Fr. Richards was referring to his homily at the 2019 Annual Legatus Summit at Monarch Beach Resort in Dana Point, California. An organization of over 5,000 Catholic executives and their spouses, Legatus defines itself as “the world's premier membership organization for Catholic business leaders committed to learn, live, and spread the Catholic Faith.” The gathering at which Richards appeared took place between January 24 and 26.

“The talk I was giving was called ‘Be a saint,’ and I based that talk on Hebrews Chapter 12, verse 14, which says, ‘Strive for peace with all men and for that holiness without which you will not see the Lord,” Richards explained in his apology.

“And as I gave that talk, I talked about part of holiness is, we need to love one another. And then at the same time in the middle of that talk, I said something very unloving. I accused an organization, Church Militant, of threatening to kill me.”

In the lecture, Richards referred ironically to Church Militant as “a good Catholic organization.”

“A couple of months ago I said something about Church Militant, and they threatened to kill me,” he had alleged.

“Literally,” the priest continued. “I got death threats from a good Catholic organization that wants me dead in God’s name.”

Almost five months later,  Richards wants to make it clear that he didn’t, and it doesn’t.

“Now I need to apologize for that because I was threatened, but it wasn’t by Church Militant,” he said.

“Let me be very clear. It wasn’t anyone on their staff, no one in their leadership, no one directly or indirectly involved with them. And I’m sorry I said that.”

Richards did not give any details about the person who allegedly threatened him.

The priest also apologized for remarks he made last year demonizing Church Militant and allowed that he had been a hypocrite.

“I also want to apologize because last October on my EWTN show Open Line, someone called and asked me about them, and I said, ‘They’re not of God. They’re of the devil,’” he confessed.

“I said we need to stop demonizing each other. Now I am very well aware of my own hypocrisy — that after I said we cannot demonize each other, then I demonized Church Militant,” he continued. “That’s not of God. I gotta stop that. I need to start living what I preach better, so I need your prayers.”

Richards stated that he wanted to be at peace with “all people, especially my brothers and sisters in the Church.”

Following revelations that Richards had accused the organization of threatening his life, Church Militant advised the priest that it would take legal action if he did not set the record straight. Then, after a homily in which Richards told his parishioners he was in trouble because he had supported Pope Francis against people who “went against the pope” and intimidated those who had written about him to their bishop, Church Militant prepared to sue. But thanks to the apology, the lawsuit will not go ahead.

Michael Voris, the CEO of Church Militant, told LifeSiteNews his organization was content with the apology.

“We’re happy he's done the right thing, and we're happy to put it all behind us,” he said via social media.

Richards has also been an outspoken opponent of LifeSiteNews. In April 2017, the men’s speaker condemned LifeSiteNews to a mission group in Ajax, Ontario. After LifeSiteNews’s co-founder Steve Jalsevac drove to Ajax to have a conversation with the priest, Richards threatened to hit him. Richards later boasted in a homily of the encounter.

Jalsevac was recently contacted by a Catholic family Richards had maligned in another talk he gave in 2017.

Christine Niles suggested yesterday on Twitter that Richards should apologize to his other victims. Regarding the priest’s apology to Church Militant, Niles said, “It took humility to do that, and I respect that. I hope he will also apologize to Steve Jalsevac of@LSNCatholic and the large family he slammed in his 2017 talk, and any others he has defamed.”