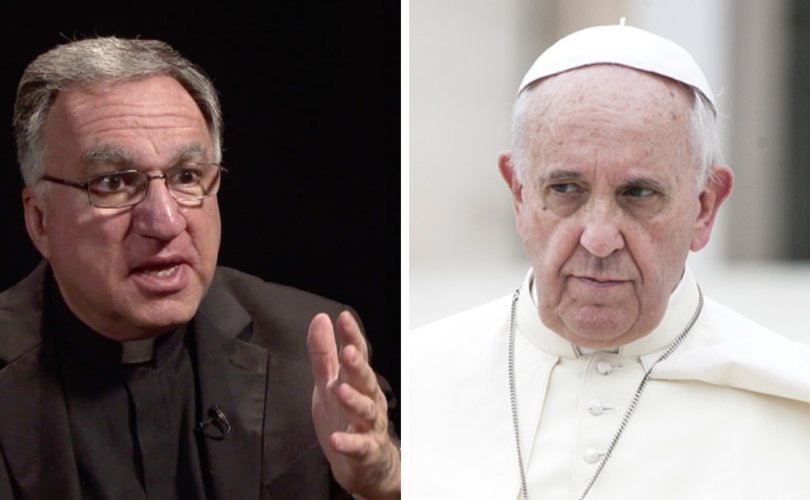 August 14, 2018 (LifeSiteNews) – A Vatican consultant who leads the Canadian Catholic media organization Salt and Light Television has issued a statement publicly recognizing and defending that Pope Francis “breaks Catholic traditions whenever he wants” and that he rules by his own personal authority, rather than the authority of the Scripture and tradition of the Catholic Church.

According to Salt and Light CEO Fr. Thomas Rosica, “Pope Francis breaks Catholic traditions whenever he wants because he is ‘free from disordered attachments.’”

“Our Church has indeed entered a new phase,” writes Rosica. “With the advent of this first Jesuit pope, it is openly ruled by an individual rather than by the authority of Scripture alone or even its own dictates of tradition plus Scripture.”

According to Rosica, Pope Francis has a “commitment to a ‘conversion’ of the papacy as well as the entire church.”

“It’s hard to predict what will come next,” writes Rosica, who calls Francis “shrewd” and imbued with the trait of “holy cunning.”

“The pope's openness, however, also a signature of his Jesuit training and development, means that not even he is sure where the spirit will lead,” writes Rosica. “He has said: ‘I don't have all the answers. I don't even have all the questions. I always think of new questions, and there are always new questions coming forward.’”

The surprising statements, which confirm the strongest accusations made against Pope Francis by orthodox Catholic critics, appear in a recent blog post by Fr. Rosica on the Salt and Light Television website (a PDF of the post can be found here). The article was republished by ZENIT, but ZENIT has now eliminated the two sentences on Francis breaking tradition from its version of the article.

Rosica’s open proclamation of Francis’ rule as an “individual” apart from the authority of historic Catholic doctrine is reminiscent of H. J. A. Sire’s portrayal of Francis as “the dictator pope” in his recent book of the same name. According to Sire, a well-published Catholic author and a (now-suspended) member of the Knights of Malta, Francis rules as an aloof and “arrogant” autocrat, indifferent to Catholic doctrine.

Rosica also indicates that Francis regards adherence to the Scripture and the Catholic Church’s traditional doctrines, which the Church declares as the standard by which the Catholic faith is itself known and understood, as a “disordered attachment.”

Pope Francis has made numerous statements, both in print and in press interviews, which appear to contradict Catholic doctrine and even defined dogma, most famously in his apostolic exhortation Amoris laetitia, in which he appears to claim that adulterous sexual acts within invalid second “marriages” can be justified or excused in some circumstances. The same exhortation has been interpreted by various cardinals and bishops as allowing adulterous couples to be given Holy Communion, an interpretation that contradicts the Code of Canon Law and millennia of sacramental discipline. Pope Francis has shown his support for this interpretation.

Rosica, a Francis partisan with a history of support for LGBT activism and the clerics who advance it, was English language assistant to the Holy See Press Office from 2013 until late 2016.

Rosica was scheduled to celebrate a mass last month for the pro-LGBT organization “All Inclusive Ministries” in Toronto, but failed to show up following a LifeSite story on the event and an exposé on the organization posted by ex-gay activist Joseph Sciambra. Rosica admits that he has preached a “mission” at the LGBT-friendly parish Most Holy Redeemer in San Francisco, which is famous for accepting and even celebrating homosexual unions.

He has denounced those who oppose LGBT activist Fr. James Martin’s book “Building a Bridge” and rejects using the phrase “intrinsically disordered,” which is found in the Catechism of the Catholic Church, arguing that such expressions in their descriptions of homosexuals “miss the mark and end up doing more harm than good. Reality is more important than lofty theological or philosophical ideas.”