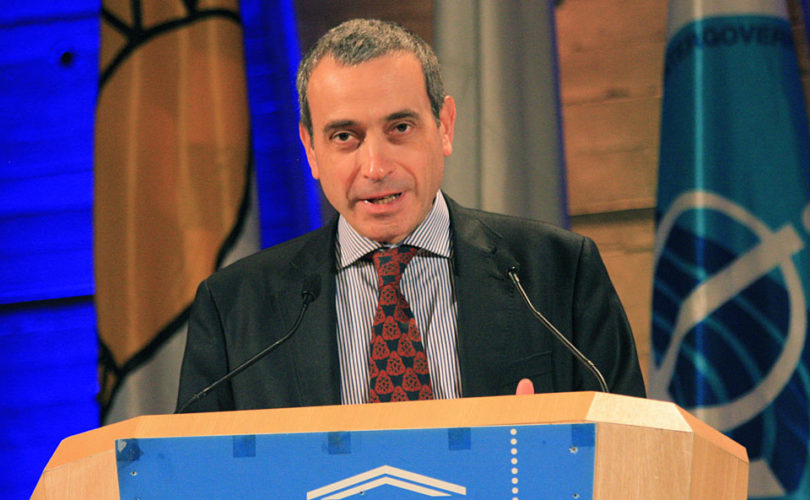 ROME, April 12, 2016 (LifeSiteNews) – After more than a year’s silence on the part of the Holy See, France has finally acknowledged this silence as its normal diplomatic way of rejecting a country’s appointed ambassador.

Laurent Stefanini has just been named as France’s ambassador to UNESCO, the Paris-based agency of the United Nations for education, science and culture, ending a long stretch as chief of protocol of the president of the Republic. The coveted position of ambassador of France to the Holy See will most probably remain vacant until the end of François Hollande’s presidential mandate next year. So ends a lengthy and confusing saga in which Pope Francis is said to have intervened personally in order to prevent the acceptance of Laurent Stefanini’s credentials because of the diplomat’s “homosexuality.”

Laurent Stefanini had the backing of the archbishop of Paris, Cardinal Vingt-Trois – who confirmed him in 1998 shortly after he converted to the Catholic faith – and of Cardinal Tauran, Camerlengo of the Holy Roman Church since December 2014. A man of culture, who speaks over five languages and has a profound knowledge of history and all things Catholic, Stefanini was an obvious choice for the “Villa Bonaparte” which houses the French embassy to the Holy See. Too obvious, perhaps: it was common knowledge at the French foreign office that he was waiting for the post as the crown to his career.

He is also said to be a practicing Catholic, without a known companion. Stefanini was never heard to campaign for “gay rights” or gay “marriage.” So little did he parade his homosexuality that reliable sources say it was possible to know him for years without being aware of it.

In naming Stefanini to the UNESCO, France has backed off a diplomatic wrestling match in which the Vatican’s side is said by the French media to have gained marks by refusing to budge despite efforts to make Pope Francis change his mind. Refusing to name a replacement is Hollande’s way of not giving in.

The upshot of the affair was that the Church – despite the Pope’s memorable words about homosexuals, “Who am I to judge” – was seen to be unfairly discriminating against a man because he was gay.

In spring last year, according to well-informed and multiple sources, Pope Francis is said to have received Laurent Stefanini for a private visit. The Catholic (but liberal) daily La Croix said at the time that the nominee to the Villa Bonaparte was unhappy that the meeting had been made public. Stefanini complained that it had been publicized in order to “harm” his interests.

This is probably one of the keys to the affair: personal jealousy towards a man who appeared too sure that his dream was coming true. But also a desire to hurt the Church: Manuel Valls, the prime minister who in his previous capacity as Minister of the Interior was a driving force against the popular uprising against gay “marriage,” was one of those who presented Stefanini’s nomination as a “provocation” towards Rome.

Was the whole affair a clever montage? In some ways it looks like one. Who was the person who pressured Pope Francis into ordering the Secretariat of the Holy See not to accept Stefanini’s credentials? At the time, the press named Ludovine de La Rochère, president of the “Manif pour tous,” the gigantic popular demonstrations against legalizing gay “marriage.” She denied this absolutely when called by LifeSiteNews.

Stefanini himself has remained consistently discreet over the whole affair.

Pope Francis, in receiving Stefanini at the Vatican after having rejected his nomination, surely wanted to show that he had no personal enmity against the seasoned diplomat. In rejecting Stefanini Pope Francis was showing the Church’s discontent with France’s law on gay “marriage,” and also with the way the mostly Catholic and peaceful demonstrators of the “Manif pour tous” were treated by the public force, with innumerable arrests, police custodies, teargas attacks and beatings.

Both Pope Francis and François Hollande are known to be headstrong. The recent well-publicized private visit of former president Nicolas Sarkozy, who spoke with the Pope for half an hour in March for a one-to-one meeting, can be interpreted as a new episode in the discreet conflict between the President ant the head of the Catholic Church.

The rest is conjecture. Perhaps Laurent Stefanini’s homosexual tendency – which the French media are presenting as a certain fact – was not the driving force in this whole affair, as would seem probable in view of Pope Francis’ declarations about homosexuals who truly are seeking God. But also in view of the fact that it cannot be said that the Vatican is 100 percent free from known practicing homosexuals…

But the theme of homosexuality was certainly exploited by the media in order to harm the Church.

France’s proposed Vatican envoy is a devout Catholic and may not even be ‘gay’: so who’s creating this flap, and why?
France nominates reputed ‘gay’ ambassador to Holy See, but months later Pope Francis has yet to approve him