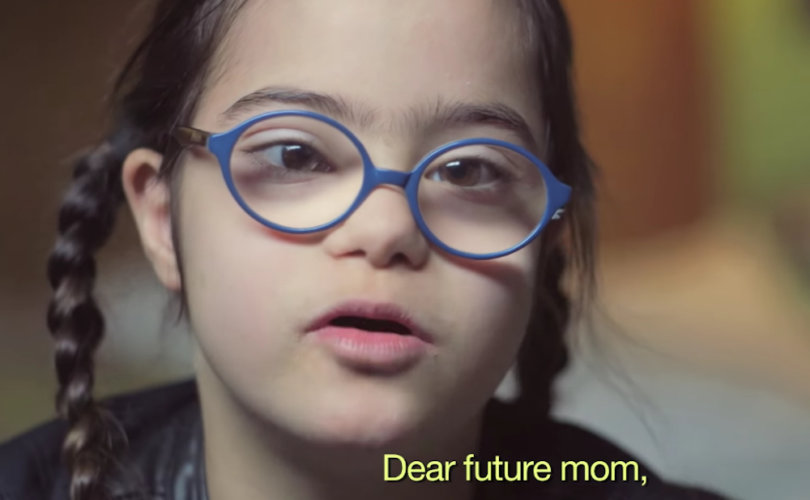 PARIS, France, November 29, 2016 (LifeSiteNews) — A beautiful “Dear Future Mom” video has been banned by the French Broadcasting Council and the French State Council because it includes smiling children with Down syndrome.

The award-winning video, produced in 2014, was made to encourage and alleviate the fears of pregnant mothers who have been given a Down syndrome diagnosis. It shows children of various ages with Down syndrome sharing details about their lives.

Despite the positive nature of the video, the French State Council ruled it illegal for broadcast because it shows kids with Down syndrome smiling.

The State Council upheld the ban from the French Broadcasting Council on November 10, stating that depicting people with Down syndrome smiling was “inappropriate” because that showed they are “happy,” and such a depiction would “disturb the conscience of women who had lawfully made different personal life choices.”

In other words, mothers who chose to terminate their babies because of a possibility of Down syndrome might feel a tinge of doubt if they saw a Down child smile.

While nearly 90 percent of pregnant mothers in Europe who are diagnosed with carrying a possible Down syndrome child abort their baby, among French mothers the percentage is even higher at 96 percent.

“Our kids, whom studies … have proven to be much happier than the cranky, sulky bunch who go through life without Down syndrome, are banned from public television because their happy faces make post-abortion women feel uncomfortable,” Downpride spokeswoman Renate Lindeman wrote.

Lindeman says the court is perpetuating a lie to justify abortion. “Women must continue to believe in the myth that society and medical professionals portray: that Down syndrome is a life of suffering, a burden to their family and society.”

“Obviously, if the truth gets out that 99 percent of people with Down syndrome are happy with their lives, society may start to question the systematic … and deliberate mass elimination (of Down children) under the pretense of healthcare and women’s rights.”

Lindeman charges that the choice to abort a child in the womb diagnosed with a possible disability is not a decision made for the child but for the parent to avoid inconvenience. “Eradication (of Down syndrome babies) is not to ‘prevent suffering’ but because authorities have decided that their differences place a burden on our lives and society.”

“I have a much better idea,” Lindeman boldly suggested. “Let’s not ban the video but make it compulsory for every couple considering a selective abortion for Down syndrome. Let’s show them the truth that families with Down syndrome have an enormous good quality of life. Let’s show a future of hope, unconditional love and yes, a lot of smiles and happiness.”

Even Polish Deputy Minister of Justice Patryk Jaki, whose own son has Down syndrome, posted a photo of his lovely son smiling with the caption:

“Hello France!  P.S.: In our country, democracy and tolerance are a little better … Not only can I live, but I can also smile.”

The Jerome Lejeune Foundation, which produced the video, is appealing to the European Court for Human Rights and has initiated a petition to the French government to intervene.