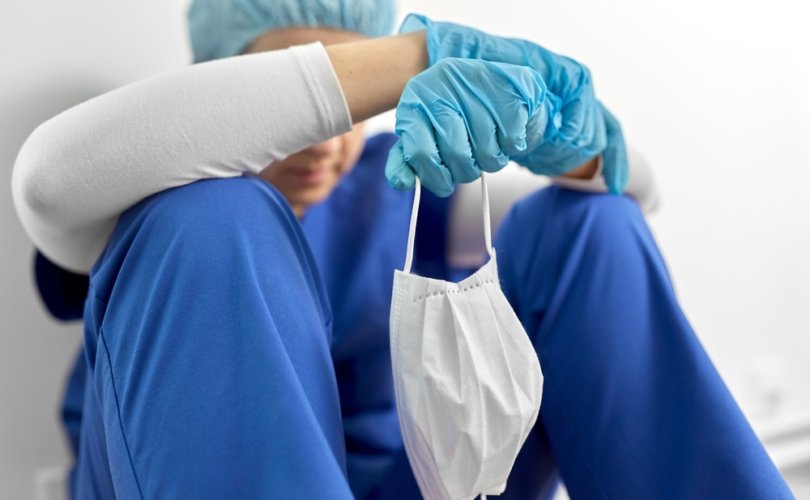 February 22, 2021 (LifeSiteNews) – The AstraZeneca experimental COVID-19 vaccine currently being given to health workers in France has caused so many side-effects that the French vaccination task force (Conseil d’orientation de la stratégie vaccinale) has recommended “a staggering of the vaccination schedule for people working in the same care unit” as well as “the systematic intake of paracetamol just before the injection and in the two following days.”

The vaccine was developed by Oxford University together with the British-Swedish pharmaceutical company AstraZeneca by cultivating the weakened SARS-CoV-2 virus in the HEK-293 cell line derived from the kidney of an aborted baby. According to the Oxford Vaccine Centre, these weakened viruses “are purified several times to remove the cell culture material,” adding that “this makes it unlikely that any human material remains in the final vaccine.” “Unlikely”, it is worth noting, does not mean “impossible.”

The French restrictions on the AstraZeneca jab follow a series of undesirable incidents registered in several hospitals in different parts of the country where personnel were being massively inoculated from the start of the campaign on February 5. These were so numerous that the hospitals were finding themselves facing personnel shortages in ICU and COVID-19 units. In one hospital, half of the physiotherapists were on sick leave at the same time after having received the vaccine.

In the most western town of France, the university hospital of Brest in Brittany was particularly hard hit. During the first week of the campaign between 20 to 25 percent of the recipients of the vaccine had to stop work because of influenza symptoms including bad headaches, high fever and sore muscles. The hospital authorities subsequently took the decision to stop vaccinations.

Similar scenarios played out in other hospitals in Brittany and have been documented by the local media in towns such as Quimper and Morlaix. In the town of Vannes 18 percent of the vaccinated health workers were reportedly compelled to take sick leave after receiving a vaccine.

In Normandy, the hospital of Saint-Lô suspended vaccinations on February 11 after ten of the fifty or so employees vaccinated on February 10 presented symptoms of fever and nausea. By that date 10, 000 shots had been delivered to health workers and 149 “pharmacovigilance declarations” had been filed. The mRNA Pfizer and Moderna experimental vaccines that are being used for elderly people have not led to such declarations, although several reports suggest that their administration has been followed by COVID-19 contaminations and deaths in care homes.

In the Dordogne, near Bordeaux, hospital workers no longer want to get the AstraZeneca jab according to local media, since the “Hygiene and Security Committee” of the hospital of Périgueux reported that a “considerable number” – between 50 and 70 percent – of those who received it “experienced very heavy side effects,” as compared with a “tolerance level” of about 10 percent.

By February 16, no less than 363 adverse events – high intensity “pseudo-influenza syndromes” in most cases – had officially been reported in France among health workers aged 50 and under (with an average age of 31) following reception of the AstraZeneca shot. This did not prevent sanitary authorities in France from proclaiming that the frequent side-effects do not “call into question the risk/benefit ratio of the vaccine.”

This is remarkable, considering that the risk of falling ill following a SARS-CoV-2 contamination is very small at that age, while the vaccine – that boasts a mere 62 to 70 percent “efficiency rate,” – is apparently causing real symptoms bad enough to prevent work in about one in five of the young people who have received the shot.

It is not clear whether the AstraZeneca jab actually prevents contagion, as it appears that the virus has been found present in people who had received it during trials.

In France, the AstraZeneca vaccine is only administered to people under 65, as beyond that age there is currently no data proving its efficiency.  The shot is at present recommended only for health workers and people aged between 50 and 65 with comorbidities making them vulnerable to a severe form of COVID-19.

Interestingly, France appears to be the only European country where the AstraZeneca vaccine is causing such an extent of illness among health workers.

According to a pro-vaccine researcher specializing in immuno-oncology, Dr. Eric Billy, the situation is linked to the age of the people being vaccinated. While the mRNA shots are being given to the elderly aged over 75 and health workers over 50, the median age of those who get the AstraZeneca shots is 34.

“The older a person is, the slower the immune system’s response to the vaccine, so by default, older people develop fewer side effects from the vaccine because their immune system reacts too weakly,” explained Eric Billy. Inversely, he said, younger people have a “very reactive immune system, and it’s rather reassuring that there are these kinds of side effects, it shows that there is an immune response.” If the Pfizer-BioNtech vaccine, for example, were in turn administered to much younger people than at present, the side effects would also probably be more intense than those currently seen, he argued: “It’s not as if 10 percent of vaccinations were followed by hospitalization.” He simply recommended staggering administration of the vaccine in order to avoid practical issues.

The question that he did not answer is the one regarding the giving of vaccines to people over 75 with weakened immune systems. Is this useful? Can it be dangerous?

Another specialist interviewed by a mainstream television station, BFMTV, reacted to the news by suggesting that the AstraZeneca shot should not be used for health workers at all. Dr. Jérôme Marty, president of the French Union for Liberty in Medicine, stated that it would be better to “keep it for young, healthy people who are at a small risk” of developing a severe form of COVID.

One wonders why it would be useful to vaccinate this category of healthy, low risk individuals at all, given Marty’s subsequent remarks.

“If a caregiver is vaccinated with this vaccine, it will not prevent the caregiver from transmitting the disease to the patient,” Dr. Marty said. “Very often in health care institutions, the disease is transmitted through the caregivers, this is called a nosocomial infection, and this vaccine doesn’t reduce contagiousness, or only slightly. It is therefore not the most effective vaccine for this purpose.”

The AstraZeneca shot is also reportedly inefficient as regards the South-African variant of COVID-19, so much so that it has been banned in South Africa but also by the French authorities in the eastern “département” of Moselle where this variant is predominant.

Another interesting point was raised by Dr. Alain Fischer, a senior advisor to the French government on vaccines, following the multiple side-effects registered in Saint-Lô, Normandy. Downplaying the importance of these events, he said that the stronger immune system of young people was probably to blame, but added that symptoms after the shot could be linked to the fact that they had “already had COVID.”

The head of the emergency unit of the Avicenne Hospital in the suburbs of Paris, Frédéric Adnet, told the mainstream television news station LCI that the most probable hypothesis explaining the wave of debilitating side-effects among French caregivers is that they had contracted COVID during previous weeks.

“When we vaccinate people who have had the disease, there can be some rather explosive reactions,” said Adnet. “As they already have antibodies, and therefore immunity, the body thinks it is infected again and reacts violently. Our hypothesis is that we observe this type of reaction in people who are vaccinated too soon after the end of the disease.”

This again raises questions as to the safety of giving the shot to people who have already developed immunity to the disease and who are exposed to it not as they would normally be via outside infection but through an intramuscular shot, short-circuiting the ordinary barriers and defenses of the body.

In France, the official recommendation is that people who have had COVID-19 during the last three months should not receive any anti-COVID-19 vaccine or experimental shot.

Adnet believes this should be taken more seriously, asking: “Shouldn’t systematic serology be carried out on caregivers who are vaccinated to find out whether they have not contracted the disease asymptomatically?”

Meanwhile, there is little enthusiasm for the AstraZeneca vaccine in France. The government has bought 550,000 doses of which only half have found takers among general practitioners, and pre-ordered a total of 44 million shots, whose recommended usage in France involves two jabs nine to twelve weeks apart.

Last Wednesday, days before the first doses will reach the offices of those family doctors’ who have ordered them for their patients over the age of 50 (less than 30,000 general practitioners out of a total of 101,000), the General Health Office (DGS) recommended that patients who receive the AstraZeneca vaccine be placed under observation for at least 15 minutes in order to screen for possible adverse reactions.

The same mistrust is visible in hospitals. “There’s nobody around. We have 100 doses, we’ve registered between 15 and 20 people” deplored Benjamin Davido, vaccine referent at the Garches hospital near Paris last Friday.

Side effects and less efficiency than that presented by Pfizer and Moderna for their experimental mRNA shots are the reasons put forward. Before the vaccination campaign started, health minister Olivier Véran stated that people would have not be able to choose which of the experimental COVID-19 vaccines they would take, but rather would have to take the one provided by the health services.