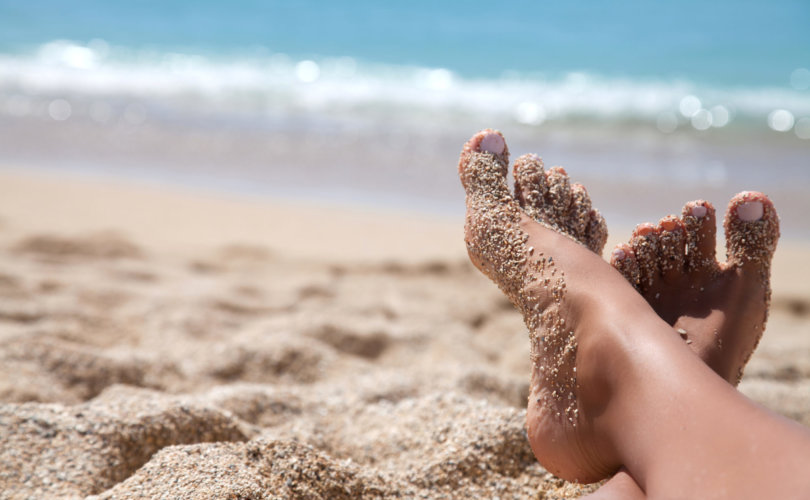 August 27, 2020 (LifeSiteNews) – Several French women who were politely asked last Thursday by military police officers to cover up when they were sunbathing topless on a Mediterranean beach at Sainte-Marie-la-Mer have received official support from Interior Minister Gerald Darmanin.

After the incident had gained attention from national media, with the “gendarmerie nationale” issuing a public apology, Darmanin tweeted on Tuesday: “It is without justification that two women were blamed for their way of dressing on the beach. Freedom is something precious. And it is normal that officials should admit their mistakes.”

At the same time, more and more localities in France are making face masks compulsory because of the COVID-19 crisis as testing and infections have been rising since mid-July – but not daily hospitalizations and deaths that remain very low. Masks, which were deemed “useless” and even counterproductive by government authorities at the height of the epidemic in April, must now be worn in all closed areas receiving the public, businesses where two or more people are in one room or space, in some outside areas defined by local authorities and, since August 27, in the whole of Paris, as well as in schools and universities when they reopen in September.

Not wearing a mask, or wearing it improperly, carries a fine of 135 euro (over $160 US) and the threat of administrative closure of shops and other venues (including churches, although this has not happened to date) where the public does not comply with the regulation.

The implication is clear: ordering citizens to cover their face despite numerous questions as to the effectiveness of a mask regarding an epidemic that is now causing very few deaths compared among a population of 68 million can be mandatory, and is not an impingement on their “precious freedom,” but asking women to refrain from topless sunbathing is a tyrannical measure.

During the Wuhan coronavirus lockdown in France, police and “gendarmes” dealt innumerable hefty fines to peaceful citizens who walked on beaches, even when they were alone or when their home was adjacent to the coast. Drones, helicopters and special patrols were used to trace the “delinquents.” No mention was made by the authorities of apologies, of citizens’ “precious freedom,” or of the police’s duty to use common sense when enforcing the law.

The freedom to be half-naked on the beach, on the other hand, turns out to be an affair of national importance, even though in Sainte-Marie-la-Mer, the military police – the “gendarmes” who ensure law enforcement in rural communities – only intervened when asked to do so by a family whose children were “shocked” to see a bare-breasted woman in her 60s close to them on the beach. There was no of a fine.

They told the woman that she was making the family uncomfortable and went on to ask two other ladies to put their bikini top back on again, causing other sunbathers to protest against their “prudishness.”

Social media in France abounded with similar comments saying that it was up to the family to leave and choose another beach. Topless sunbathing for women has been a common practice in France since the 1960s and a feminist push for the right to get a tan in the same places as men. The practice is not considered as “sexual exhibitionism, as would be the case elsewhere than on the beach, although municipalities can ban it within their limits in which case it carries a 38 euro fine ($46 US).

Fewer and fewer women choose to go topless, though: 43 percent of French women under 50 would sunbathe bare-breasted in the 1980s against less than 20 percent today, according to a poll quoted by the Daily Mail.

There is no ban on topless sunbathing in Sainte-Marie-la-Mer.

A statement by the Gendarmerie of the Perpignan region at the foot of the eastern Pyrenees last Tuesday reacted to the social media buzz relating to the incident, calling the action a “mediation that was nevertheless a blunder.”

“On August 20th, a patrol of two gendarmes asked three persons who were sunbathing topless on the beach of Sainte-Marie-la-Mer to put the tops of their bathing suits back on. Their action followed a request from a family of vacationers who said they were embarrassed by the situation because of the presence of children. Guided by a concern for appeasement, the gendarmes asked the persons involved if they agreed to cover their breasts after having explained the purpose and the cause of their action. No municipal bylaw prohibits this practice in Sainte-Marie-la-Mer,” said the official statement.

It received nearly 2,000 comments, mostly favorable to the topless sunbathers.

Revealingly, the municipality of Sainte-Marie-la-Mer had already published its own communiqué on Monday: “The City Council and its Mayor believe that the fact of a woman tanning with her breasts bare is in no way a violation of decency or morality. In fact, they have never asked the forces of law and order to act in this context. Indeed, the elected officials are very attached to the republican principle of freedom. They also affirm their commitment to gender equality.”

The general consensus appears to be that the family asking for topless women to cover up must have been immigrants, probably of the Islamic persuasion. Modesty, especially female modesty, has over the years become equated in France with the Muslim culture, especially since the growing Islamic population – now estimated at about 4 million to 8.5 million, depending on the source – is increasingly choosing to have its women wear headscarves and to make “burkinis” (very concealing swimsuits that include a head-cover) legal in public swimming pools. Burkinis – which are a statement of cultural and Islamic identity that many French people reject as such – are an increasingly common sight on French beaches.

The upshot – as always when false dialectics invade a discussion – is that it is now seen to be not only modern, progressive and liberty-loving to condone indecent garb, but also as a sign of non acceptance of Islamic laws and customs that are indeed totally foreign to European, and therefore Christian culture. And to the truth.

But we have now reached a point where not only some feminists and the progressive left assert women’s “right” to go topless at the seaside or to wear the tiniest of mini-skirts and over-revealing tops: all the main political parties in France have slammed the gendarmerie for having called on three women to cover up in an insignificant incident at a beach near Perpignan.

Marine Le Pen’s Rassemblement national was not the last to do so: Jean Messiha, responsible for the party’s research and rationale, defended topless sunbathing on the French television station, CNews, asking whether the show’s anchor “knew many French families who ask women to cover up at the beach?” He accused the officers who did so of being “collaborationist zombies.” ‘The fact is, of course, that there are still French Catholic families who pick and choose: there are many informal “family beaches” where topless bathing is just not done.)

In a September 2019 blog post, right-wing chronicler Ivan Rioufol of the mainstream Figaro illustrated the present rejection of modesty by assimilation of it to sharia law in a column titled “the mini-skirt, defeated by modest fashion.” Rioufol complained about haute couture houses such as Balenciaga, Dior and Givenchy who presented knee-length and even ankle-length dresses and skirts and “voluminous blouses” in their new collections.

He attributed the style exclusively to the “Islamic code” that was slowly distancing Western women from the “cult of the body,” which is our “Greco-Latin heritage.” He also accused “modest fashion” of “reinforcing a degrading vision of woman as a temptress. Rioufol asked his readers to listen to the French model Laetitia Casta explaining why she posed nude for Elle last summer: “When we come into the world, we are naked … I am appalled by the vengeance of a certain form of puritanism … At the end, nudity is an act of rebellion.”

And so traditional modesty, traditional Catholic values and the wise prudence that advises women to avoid indecent garments and attitudes that can cause others to fall, but without compromising elegance and beauty, are being ridiculed and even thrown away as a reaction to the burka.