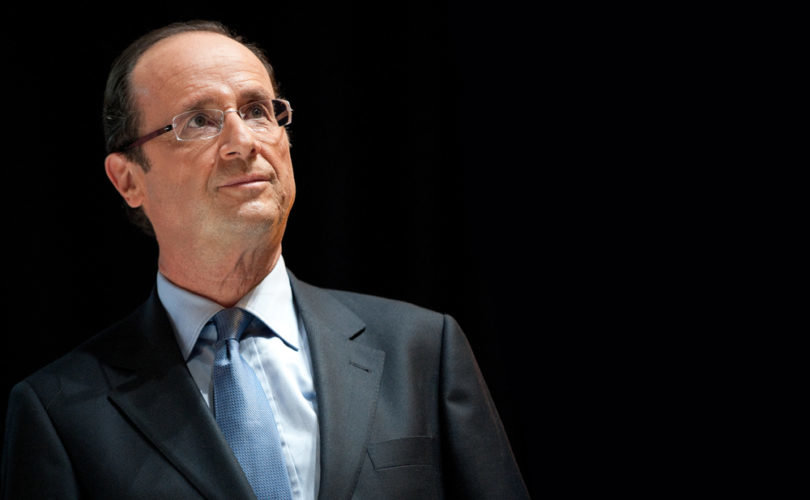 PARIS, January 20, 2016 (LifeSiteNews) – One year after France's socialist government set up a new plan to help women claim their “abortion rights,” health minister Marisol Touraine presented a public review of its implementation, proudly announcing that “most” of the measures announced are now fully functional. But there is always a way to go even further: Touraine promised that as of April 1, 2016, all medical acts related to a legal abortion will be 100 percent funded by national health insurance.

Abortion itself has been costless for all women in France since 2013. Most medical acts unrelated to lengthy illnesses are only partially covered in the French health system.

As of April 1, all consultations, sonograms before and after the abortion, blood tests, biological testing, and consultations related to filling in of consent forms will be fully paid for by public health insurance.

The decision was unexpected, but it does fully carry out François Hollande's repeated pre-election commitment to help all women to obtain a legal “pregnancy interruption” – or “IVG,” as it is called in France – easily and speedily. It puts abortion on the same footing as pregnancy: all medical acts and hospital stays related to pregnancy, birth, and follow-up visits are 100 percent funded by public health insurance.

From now on, this will also be true for abortion.

For most women, the measure will make no difference insofar as complementary insurance, partially funded by employers, are widespread: the overwhelming majority of the population has some form of coverage offering at least the equivalent of a theoretical 100 percent payment by public health insurance. Provision has been made for publically funded “mutuelles” in order to help illegal immigrants, the jobless, and other “financially vulnerable” citizens to obtain better funding for their health care. The measure is in fact aimed at the poorest members of the population.

For complementary insurers, Touraine's administrative decision will mean lower costs, although insurers will still be obliged to finance costs that go beyond the official social security rates. Their former liberty to offer contracts that do not cover abortions will now totally disappear, and each French taxpayer will be obliged to fund abortions, be it through widespread compulsory social security contributions on salaries and other incomes or through direct taxation.

Mariesol Touraine chose to announce the new measures while visiting a Planned Parenthood Center in Paris last week. The French Planned Parenthood association does not offer abortions but does refer women to public and private hospitals that practice abortions and also gives advice regarding abortions in Spain and the Netherlands for women whose pregnancies are farther along than 12 weeks' gestation, the legal limit for elective abortion in France.

The minister proudly presented the measures, which have already been implemented since the government drew up a “National Plan of Action” in favor of abortion in January 2015, stressing that “abortion is a right that must be defended.”

A national free and anonymous hotline was put up in September; it has received an average of 2,000 calls per month, Touraine said. The Ministry of Health also organized a public campaign under the slogan “IVG, my body, my choice, my right” in order to give better visibility to government-funded information tools to help give women access to abortion.

No public hotline or website exists to offer help and information to mothers facing an unexpected pregnancy and who want to keep their baby.

The campaign was launched especially to counter the success of a private website that offers such help and information, www.ivg.net, because it kept coming up first in internet searches. Touraine explained that her ministry has funded “pay-for-placement” tools to allow the government pro-abortion website to come up first. A week ago, Touraine even asked the public to click on the website to help boost its notoriety, even though this technique is ineffective with regards to Google's algorithm.

Besides the new measures to help France maintain its abortion levels, other legal reforms have taken place and should be implemented by next summer, Touraine said. These include the scrapping of the seven-day cooling-off period; better access to new local abortion providers, including midwives, who will be allowed to prescribe abortion pills and monitor the procedure; and doctors who will be allowed to perform surgical abortions in local health centers as soon as the new sweeping Health Act comes into force. The law also obliges regional health agencies that coordinate all health services for the government to ensure that sufficient abortion services are offered – the equivalent of abortion quotas.

All these measures are being taken in a context of continued high abortion rates: France has exceptionally high “contraceptive coverage,” but officially, 210,000 abortions are performed each year, mostly on women who were using some form of (failed) contraception when they became pregnant.