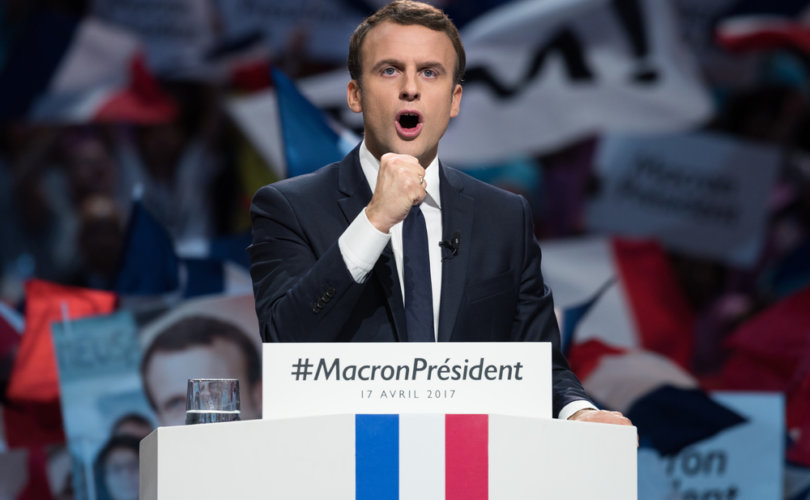 PARIS, France, May 9, 2017 (LifeSiteNews) — After a campaign fraught with underhanded attacks, Emmanuel Macron is France’s new president. The 39-year-old is to take over officially from socialist François Hollande next Sunday after five disastrous years for the culture of life.

With Macron, there will be no turning back. While his electoral platform was hazy from the start, he did not propose a single pro-life or pro-family measure.

On the contrary, visiting a primary school he told a classful of children that it is “normal” not to be in the same family all your life because people get divorced.

“Today there are plenty of different sorts of families,” he told them, adding a question: “Does any one of you have same-sex parents?” A charming young black girl grimaced unbelievingly. But Macron has committed to promoting LGBT rights in school from the earliest age.

Both of the major parties that have ruled France for more than 30 years are the main losers in the 2017 election, with official socialist party candidate Benoît Hamon getting less than seven percent of the vote during the first round.

But in point of fact, Macron, who considers himself “neither left nor right” while offering a totally new political design, is truly an “establishment” figure. Having worked as a high-ranking inspector of public finances and also for some years as an investment banker for Rothschild’s, he served from 2012 to 2014 as secretary general of the Elysée – the French equivalent of the White House – under Hollande before becoming minister for the economy in his government for two years.

Macron stepped down last year in order to launch his bid for the presidency, seemingly as an outsider but in fact with Hollande’s none too discreet support, and the counsel of several very progressive liberals. These include Jacques Attali, a universal cat’s paw to mainstream politicians in France who advocates or at least foresees euthanasia for economic reasons, and preaches sexual liberty.

Pierre Bergé, former lover of deceased “couturier” Yves Saint-Laurent and a prominent defender of same-sex “marriage” and LGBT rights, is another close friend and counselor who one said of surrogate motherhood and factory work: “Renting out your belly or your arms – what’s the difference?”

Macron was elected with what looks on paper like an overwhelming majority, gaining just over 66 percent of the vote in the second round of the election, well ahead of Marine Le Pen, the nationalist anti-Europe and anti-globalist candidate who obtained a little less than 34 percent.

Le Pen faced uniform opposition from the mainstream media and fear-mongering by large sections of the establishment. Her program was made out to be “extremist” because she adopts a firm stance against uncontrolled immigration. Meanwhile, Macron favors an “open” approach, as illustrated by German chancellor Angela Merkel’s open arms to more than a million refugees, most of them Muslims, in 2015, while migrants keep moving into Europe from Africa and the Middle East.

François Fillon, the supposedly “Catholic” candidate who smoldered with anger when it was suggested he wanted to reduce abortion “rights” (although he did have a better agenda in regard to freedom of education), was the first to rally behind Macron after the first round of the election in April, announcing that he would vote for him in order to block Le Pen.

Even so, Le Pen’s defeat was more resounding than expected. Senior members of her party, the Front National, had said they would consider over 40 percent a success, but she did not reach 34 percent. This can be attributed in part to her botched performance during her face-to-face televised debate with Macron four days before the election.

Le Pen could still count on her 7.5 million “own” voters (out of more than 47.5 million potential electors) who chose her in the first round, as well as those of a small sovereignist party with whom she made an electoral pact shortly after having passed the first hurdle. In the end, she did obtain the highest total reached by the Front National with 10.64 million votes.

Macron, on the other hand, was more or less assured of the vote of the many centrist and socialist voters as well as part of the economically liberal right-wing “Républicains” who followed Fillon. Macron obtained 20.7 million votes.

Abstention reached a relatively high figure – more than 12 million voters did not bother to express a choice – while blank and spilt votes reached a record high, totaling more than four million, a sign that a large part of the electorate were at a loss for a representative candidate.

The French Bishops’ Conference was relatively discreet on the election, urging Catholics to vote according to their conscience. But they abstained from clearly reminding them to pay particular attention to the “non-negotiable points” as underscored by Pope Benedict XVI: respect for life, upholding the family as the indissoluble union between a man and a woman, and recognizing parents as the primary educators of their children.

However, several bishops, including Bishop Pierre d’Ornellas in Rennes and Cardinal Barbarin of Lyons, the Primate of Gaul, made their preference for Macron clear in public statements, notably on immigration and the construction of European Union, which Macron intends to intensify. The European Union plays a heavy role in the promotion of gender ideology and abortion “rights” all over the continent.

The truth is, of the 11 candidates who participated in the first round of the presidential election on April 23, not one had a truly pro-life and pro-family platform. Of the two left on Sunday – Macron and Le Pen – both proclaim abortion is a “right.”

France is now in a situation where it seems next to impossible to find a politician who has a chance of being elected and who is willing publicly to defend a pro-life position.

Le Pen favored restoring pro-family fiscal and social benefits, and she also promised to reverse the new law that makes dissuading women from aborting via internet “information” sites a criminal offense. She proposed to reverse the law on same-sex “marriage” to be replaced by a an “enhanced” form of civil union. But that was all.

It appears the most French pro-lifers can now hope from democratic politics is to preserve the status quo and to avoid further slipping down the slope of the culture of death.

It can be argued that Le Pen enjoyed wider media coverage and less systematic opposition from the establishment than her father, Jean-Marie, the historic leader of the Front National, mainly because of her refusal to campaign for the reversal of abortion laws.

Opposition to abortion is not only denied mainstream media platforms, it also entails political alienation. Refusing to speak out against the killing of innocent unborn children is seen as a sort of admission ticket into French politics. But it is not enough, as Le Pen’s failure to be considered as a “normal” candidate has made clear.

Macron, on the other hand, is a perfect fit for European politics and the globalist agenda. His two speeches on election night made clear references to “humanism” – often a code-word indicating bowing to Masonic influences – as well as the “Enlightenment” and its free-thinking refusal of divine law. While making few specific political announcements, he did stress that under his presidency France will consider “the fight against climate change” a priority. In plain language, that means it will pursue the Sustainable Development Goals of the UN – and their anti-population stance.

Macron’s first public speech took place in front of the modern glass pyramid that marks the entry to the historic palace of French kings in Paris, the Louvre. The pyramid was one of several architectural landmarks imposed on the French capital by former socialist President François Mitterrand, all marked with evident Masonic symbolism.

Macron’s symbolic choice of venue made a deep and disturbing impression on many French Catholics. Social media on Monday morning were alive with comments comparing the young new president who spoke mainly of “togetherness,” “benevolence,” “non-discrimination” and “love” with the Lord of the World, the futuristic novel by Robert Hugh Benson, and Michael D. O’Brien’s “President” in the Father Elijah series.

Far-fetched? Perhaps. But Macron’s propensity to religious syncretism, his globalist compliance and the adulation that met his homily-like first speech to his “followers” on Sunday night, and a theatrical entry to the sound of Beethoven’s Masonic hymn Ode to Joy are definitely food for thought.