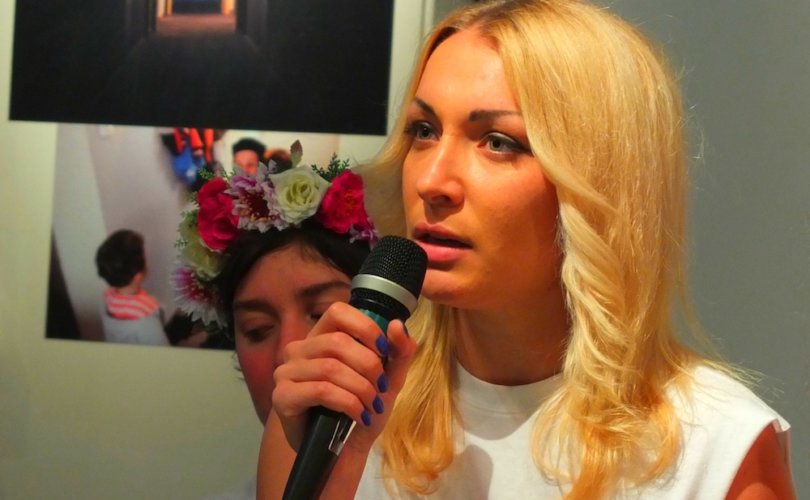 December 1, 2017 (LifeSiteNews) — Inna Shevchenko, leader of the international feminist group Femen and organizer of topless demonstrations in Catholic churches and against Christian religious, has been given France’s 2017 International Secularism Award.

The award was presented by the “Comité Laïcité République,” a French secularist organization with close links to Freemasonry. While the group itself has no organic link with France’s public administration, the prize was handed out in the Grand Salon of the town hall of Paris, in the presence of the mayor of the capital of France, Anne Hidalgo, as well as several former ministers, senators, members of the National Assembly and other top politicians.

These included former Prime Minister Manuel Valls and former socialist minister Jean-Pierre Chevènement, both Freemasons. Chevènement is the special representative of the French government in Russia – and he was, incidentally, decorated by Vladimir Putin in Moscow at the beginning of this month with the Order of Friendship of the Russian Federation, a spinoff of the former Soviet Order of Friendship of Peoples.

In the formal, gilded and overly ornate setting of the 19th century building,  Shevchenko was formally rewarded for her activism for “women’s rights” and her “tireless commitment to secularism.” Hidalgo especially extolled her work for “women’s emancipation.”

“Our city, with its 50,000 municipal workers and 2.3 million inhabitants is under the obligation to set an example,” she said, adding that the “commune” of Paris itself is working to eliminate any kind of non-respect for secularism in its own organization, in particular through special training modules that workers must follow.

Hidalgo also called for “inclusive growth,” “peace,” and “fraternity” within world cities such as Paris to put an end to “inequalities and opposition that breed incomprehension in society.”

As far as peace and harmony go, Shevchenko is an unlikely symbol. The most spectacular action in her activist career came in 2012 in her home country, Ukraine. Bare-breasted as is Femen’s custom, she was involved in chain-sawing a monumental memorial crucifix to the memory of the victims of communism.

With a criminal case having been opened against her and her accomplices, Shevchenko came to France and obtained political asylum in 2013, despite or perhaps because of the fact she created a Femen training camp, where she was joined by international and French activists. Their slogan? “Go, undress and win.”

Since her arrival in France, actions by Femen include a topless attack in November 2012 during a traditionalist demonstration against same-sex “marriage.” Along with other activists, they dressed as nuns. Topless as usual, she sprayed unidentified liquids on the crowd from cans bearing the inscriptions “F… Church,” “In gay we trust,” or ‘Holy sperm.” In February 2013, just after Pope Benedict’s resignation, a group of topless Femen burst into the Notre Dame cathedral of Paris, screaming and pounding on the new cathedral bells on exhibit in the nave. While this action was almost unanimously condemned as a “useless provocation,” a subsequent lawsuit against the women by a Christian defense group, AGRIF (Alliance générale contre le racisme et pour le respect de l’identité français et chrétienne), was lost at first instance and is still pending at the Paris appeals court. The Femen’s lawyer in the case, Patrick Klugman, was among the official hosts of the award ceremony for Shevchenko in the Paris Town Hall a few weeks ago on November 14.

In another blasphemous event in December 2013, one Femen mimed an abortion with a cow’s liver representing the Infant Jesus in front of the altar of the Madeleine church of Paris. A slogan painted on her bare torso proclaimed “Christmas is canceled.”

In choosing to award its international prize to Shevchenko, the Comité Laïcité République unequivocally did so in support of these actions and the secularist philosophy behind them. It was made clear that Shevchenko, and not the Femen group, was being honored. However, in her acceptance speech, Shevchenko made reference to the group and called her “sister” Femen to join her on stage before dedicating her prize to them. They were received with loud applause and a standing ovation together with the laureate.

Shevchenko explained that she was more accustomed to “torture,” “terrorist attacks” and “life in exile” than “such honors.” Speaking about the Femen  movement, she defined it as “a group of women who try to change the world without asking for permission …  in the longest revolution that ever was: “women’s revolution” against “religious oppression.”

“All over the world, they try to penetrate our bodies with their patriarchal norms. Every day, words said in the Vatican, in Mecca, in Jerusalem underline the inferiority of women,” she said, calling for a “universal feminist struggle.”

“The liberation of women’s speech that we have been fascinatedly observing these last weeks is only possible in a secularist society where religious institutions have no political power and where religious leaders have no immunity. (…)  I call on everyone to come together and to challenge religious patriarchal ideas, not faith or spirituality but dogmas, rules and traditions created to impose and maintain freedom-destroying male authority,” she proclaimed toward the end of her speech.

An interesting remark, insofar as the Masonic and humanist tradition that lies at the roots of the French Revolution and Republic are all for “spirituality” without the Holy Trinity and reject dogmas as the main hindrance to freedom and liberty.

She was in fact echoing the gist of Patrick Kessel’s speech for the occasion, in which the president of the “Comité Laïcité République” piled shame on those who oppose gay “marriage,” abortion, and other manifestations of the culture of death. Kessel explicitly called for cross-party union between the left and the right to legalize euthanasia, as they have already, in perfect Masonic “fraternity,” united to impose legal abortion and same-sex “marriage.” Kessel was formerly the Grand Master of the largest Masonic Lodge in France, the left-leaning Grand Orient. He now holds official posts in the High Council for Integration (of immigrant minorities) and in the Observatory of secularism created by President Chirac in 2007 and given a more effective role by socialist president François Hollande in 2013.

The prize awarded to Shevchenko was explicitly linked during the ceremony to the famous painting of Delacroix, Liberty Guiding the People, in which a bare-breasted Marianne, the symbol of the French Republic, leads a revolt against the constitutional monarchy in 1830.

Shevchenko also served as inspiration to Olivier Ciappa, the designer of France’s basic postage stamps that bear a drawing of “Marianne – or so he said – and she was quick to pick up the story by tweeting on July 15, 2013: “FEMEN is on French stamp. Now all homophobes, extremists, fascists will have to lick my — when they want to send a letter. @Femen_France”

Bernard Antony, president of the AGRIF, reacted to the award in a statement in which he remarked that the event had “usefully and significantly proved the Masonic manipulation to which these pitiable poor fantasized girls” have fallen victim. He called Shevchenko the “Pasionaria of the extremist secularist anti-Christian hate group of the Femen,” a “champion of violence in exhibitionist breast-baring.” Speculating that Shevchenko had not undressed for the event because of some kind of “bourgeois timidity,” he deplored that Hidalgo should not have had the “delicacy to be the first to unhook” her “archaic bra” with “militant simplicity.”

On a graver note, he added: “Had there been by chance, in the Grand Salon, a woman who was not under the domination of the Grand Orient, she could have drawn ‘sister’ Shevchenko’s attention to the fact that as far as ‘religious extremism’ goes, apart from that of jihadist Islam, it manifests itself most plainly in the gnostic Masonic religion under the cover of secularist domination,” Antony concluded.